A widely-quoted survey from 2006 found that only one in ten American teenagers regularly wore a watch and that two thirds had never worn one. Expensive, luxury wristwatch brands like Rolex still sell, but they have become almost purely a fashion item – a bit of bling that also happens to have function as well as form.

Why wear a wristwatch when you have a perfectly good timepiece in your pocket? Even the dumbest smartphone has one feature that is probably used above all others – the clock, checked regularly throughout the day like a pocketwatch.

The death of the wristwatch is a curious by-product of the smartphone phenomenon but those same phones could hold the key to its resurrection. The last few weeks have seen a flurry of rumours and announcements about “smart watches” from Apple, Samsung and Google to join indie adventurers like Pebble and established names like Sony.

Is the smartwatch the next must-have gadget or is this just a weird blip? The tech industry equivalent of the Harlem Shake – something that (for a few weeks at least) everyone wants to be seen to be doing, despite secretly knowing it to be a bad idea.

A brief history of time(pieces)

The idea that a wristwatch might work as a sort of ultra-portable computer actually predates the smartphone. In the early eighties, Casio and Seiko had a small range of watches that could store tiny amounts of data typed on a fiddly keypad or synced from a PC.

By the mid 1990s there were more advanced personal information management (PIM) watches with titchy memories for appointments and multiple alarms, and notably Microsoft developed the Datalink range with Timex. This was effectively a wearable PC companion that could sync via a cable or ‘wirelessly’ via an ingenious optical sensor held up to the PC’s monitor. 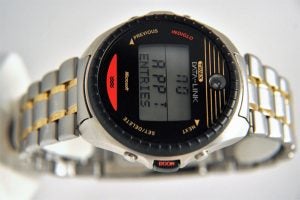 The Timex Data Link, from the 90s

In the early 2000’s Fossil was marketing the Fossil Wrist PDA. This was basically a wrist-sized PDA with a version of Palm OS which could run apps and games as well as tell the time. It was neat and interesting but fiddly to use and arrived just as Palm’s fortunes were fading. IBM even made a vague stab at cramming a full Linux OS into a wrist-sized computer, which was quickly abandoned. 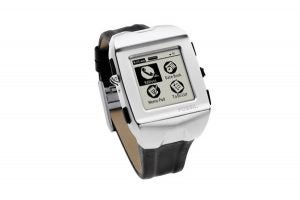 Microsoft looked to have killed off the idea with the failure of its ambitious Smart Personal Object Technology (SPOT) project. SPOT was meant to usher in a world of smart devices running embedded Microsoft software and slurping live data from MSN Direct – a Microsoft-run FM broadcast system that transmitted news, weather and stock reports in major US and Canadian cities. A handful of SPOT watches were produced (also, bizarrely, a SPOT Coffeemaker) but they never really caught on and the project was junked in 2008.

The idea is not new, in other words. Perhaps it is just because of the sci-fi staple of the wrist computer but you just don’t seem to be able to keep this idea down. So why, if the idea is so prevalent, does the smartwatch keep failing?

One obvious point is style. Whatever the merits of any of the above devices, none of them were notable for their aesthetic qualities. Many were simply ugly or slightly too big and bulky for comfort. A wristwatch is still in some sense an item of jewelery and decorating your arm with a brutalist slab of plastic the size of a beer mat is not widely considered a great look.

Another is that the early smart watches seem designed to solve a problem to which they are unsuited. If you want to work, read documents, view appointments or play games then the tiny screen and input methods on offer in a watch are less than ideal. Those problems were better solved by palm-sized PDAs and, ultimately, smartphones and tablets.

The new crop of smart watches – by which I mean both existing models like the Pebble and Sony SmartWatch as well as the proposed devices from Apple, Samsung and Google as designed to work in tandem with existing mobile computing platforms. Pebble and Sony at least are quite a bit smaller and cooler-looking than the chunky wrist slabs of old. 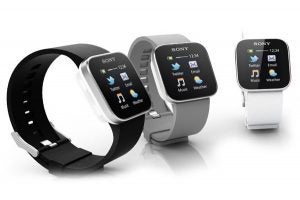 They are there not to act as your main mobile computer but to serve as notification devices or convenient interfaces so you can keep your real smartphone in your pocket but still check incoming messages or skip tracks in your music app.

Actually, that last paragraph-but-one isn’t quite right because we really don’t know anything about the proposed watches from Google, Apple and Samsung. We can make an educated guess that they will work with either iOS, Android or both. We can assume that your phone will be able to use them to let you know when you have an incoming call, email or SMS but we don’t know what – if anything – they may do other than that.

There are two areas in which a smartwatch could really excel, however, and Samsung may have given us a big clue about the first. The launch of the Samsung Galaxy S4, earlier this month detailed the new S Health functions of the phone, which is designed to help you keep track of your physical well being. One way to do this is by using the S Band, a new peripheral that works like the Nike Fuel band to track your movements and other biofeedback. 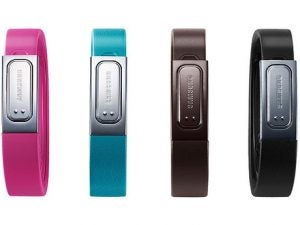 The S Band, being essentially a watch strap with A Levels, seems like a natural fit to any smartwatch from Samsung, and similar technology could easily be added to rival devices. The Nike Fuel band from which the S Band takes much of its inspiration even has a built-in digital watch, for goodnesss’ sake. Take the hint, manufacturers.

The other area is motion control. A smartwatch equipped with motion sensors could be a great control mechanism for something like Google Glass. There are tech demos of sensors picking up movement in wrist or arm muscles that are fine enough to discern finger gestures as well as broader sweeps of the arm but even without something so refined, motion sensors could make smartwatches more usable one-handed.

We have no way of knowing yet if the latest incarnation of the Smart Watch will take off but there is one final element that is utterly crucial to their success – design. If the wristwatch is going to make a comeback it is going to need more than brains. It must also be beautiful.

Convincing a geek to strap a computer on to their wrist is one thing but mass acceptance is going to need a touch of elegance. These must be devices that are socially acceptable to wear if you are clubbing, in a business meeting or on a first date. In short, if people are going to start wearing wristwatches again then it would help if they are smart – but they absolutely need to look like watches.

What’s your view on the future of the smartwatch? Drop us a comment.