I was recently invited to watch the first episode of Skylanders Academy – Activision’s new Netflix show based on the insanely popular toys-to-life franchise – ahead of the series launch on October 28.

It seemed rather pointless for me, a 26-year-old manchild, to write a review of a kids show, discussing mise-en-scene, Todorovian theory and other buzzwords I haven’t used since university, so I decided to bring my four-year-old cousin along for some real expert insight. I learned an awful lot, not least that being responsible for a toddler is both challenging and hilarious.

The screening was hosted in a very posh London hotel, and after picking up my cousin, we headed in. Activision did a great job offering plenty of things to keep the kids entertained ahead of the screening, including a bunch of demo pods of the latest entry in the game series, Skylanders Imaginators. Entertained, or indoctrinated to spend tons of money on all of the toys? The line was a little blurry.

After getting Ninja Godzilla (not my cousin’s real name, unfortunately) an orange juice – then a water when it was discovered this was in fact orange juice with bits – we stood around and watched other kids play Imaginators. Naturally, it wasn’t long before Ninja Godzilla desperately wanted a go, and he was soon sitting in front of the game.

As an adult, this was my first time seeing how quickly kids become hooked on Skylanders – the evolution going from enjoying the starter pack to wanting to buy every toy on the shelf. In front of the TV was the Portal of Power and a selection of toys. Once my cousin discovered that moving toys on and off the portal changed the playable character – each of which looked incredibly cool with its own flashy moves – he suddenly wanted to try out not just every toy in front of him, but every toy in the room. 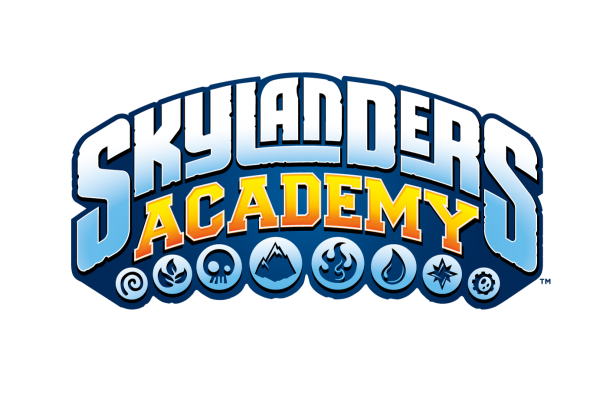 Fortunately, before I had a city-demolishing tantrum on my hands, it was time to go and watch Skylanders Academy. I asked Ninja Godzilla where he’d like to sit, and he chose the first seat as we walked in, right at the back. I was concerned that he’d struggle to see, but he insisted this was the seat for him. I later discovered this is because kids are geniuses; Ninja Godzilla chose this seat so that when the show finished, he could be the first one out the door and back on the Imaginators pods.

The opening presentation talked about some of the voice actors included in the show, including a prominent YouTuber. Ninja Godzilla responded to this news very enthusiastically, shouting, “I watch YouTube!”. Once it was revealed that the YouTuber was The Diamond Minecart, my cousin’s excitement waned. “I don’t watch that one,” he said.

“That’s OK,” I replied, because I’d never heard of him either. However, I was curious, and asked him, “So which YouTube videos do you watch?”

I stuck a pin in that one for the certain counselling sessions that will come later down the line.

The show started and immediately my cousin was laughing and giggling. He was fascinated by the sheep, which were both adorable and sinister. At just four-years-old, however, the over-arcing plot of Spyro and the gang studying to become fully-fledged Skylanders, and Spyro’s laxed attitude to studying, went over his head. The show is aimed at kids just a bit older, but there were still plenty of moments he found funny. Eruptor and his hot-headed ways proved a particular highlight.

Check out a snippet from Skylanders Academy Episode 1

What I could appreciate was the amount of jokes aimed at the parents. Spyro – despite being a cocky douchebag in the show – has plenty of one-liners that thankfully fly right over the kids’ heads and land for parents. But the shining star for us big folk will no doubt be Glumshanks, Kaos’ minion, who is so down in the dumps that the one-liners are perfectly delivered. I couldn’t help but chuckle when the green goblin began discussing his anxiety medication.

Visually, the show is incredibly well-made. Ninja Godzilla enjoyed the vibrant colours on display throughout all the great battles as Spyro, Stealth Elf, Eruptor and the others train to become Skylanders. A moment where Spyro isn’t paying attention in class sees him berated by his teacher, Jet-Vac, quite ferociously. Ninja Godzilla was taken aback, informing me, “My teacher doesn’t do that to me.” I should hope not.

At the climax of the episode, Spyro is tasked with rescuing his fellow Skylanders from Kaos and his evil doings. I asked Ninja Godzilla what he thought Spyro would do, to which he replied, “Kill them.”

Not quite, Damien, but I know what he meant. Watching the battle ensue in all it’s well-animated, vibrant spectacle, Ninja Godzilla let out audible “oohs” and “aaahs” and was absorbed by the action. After Spyro and the gang *SPOILERS* take down Kaos, the episode comes to a close, but not before Kaos reveals his next genius plan for Skylands domination. 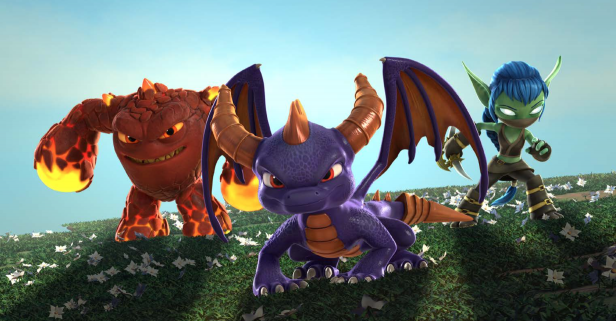 As the credits rolled Ninja Godzilla told me he really needed a “wee wee”, so I took him outside to the loo, at which point he told me he didn’t need to go any more, but asked if we could play Imaginators again. I saw my cousin get indoctrinated before my very eyes, and was outsmarted by a four-year-old in the process.

Chatting with Ninja Godzilla afterwards to get his feedback, he told me he really enjoyed it, and thought it was funny. He loved the parts where they fought everyone, but didn’t like Stealth Elf, or when Eruptor got mad; Eruptor causes a lava flow when upset, which I think concerned little Ninja Godzilla. He didn’t say much else, and I immediately regretted handing the infant his goodie bag before grilling him with my Paxman-esque questions.

Personally, I thought the show was great. It does what every great kids show should do: appeal to both kids and their parents. There’s plenty of visual spectacle and entertainment, but maybe my four-year-old cousin was a little too young to take in the entire episode.

Still, he happily sat through the whole thing, which at that age is a pretty amazing feat and probably the only ‘review’ most parents need to read.

Will you tune in to Skylanders Academy with your brood? Let us know in the comments below.