Should you upgrade to Sky’s super-charged Q service, or stick with your Sky+ HD box?

Sky Q’s a complete hardware and software refresh that aims to completely rethink the way we consume and find content on the broadcast giant’s network.

The package includes everything from a reworked user interface and mobile app, to a brand new UHD (4K) ready Silver box with an impressive 2TB of storage and touch-focused control.

The wealth of updates make comparing Sky Q to its predecessor a tricky-task, many potential buyers may struggle with. Here to help we’ve created a definitive guide chronicling what’s new in Sky Q.

Arguably one of the biggest advantages of Sky Q over current Sky set-top boxes will be the added support for Ultra HD/4K programming. So if you’ve already upgraded to a 4K TV, Sky is promising you’ll be able to view higher resolution content in 2016 some time after the box lands. It’s done via the HDMI out, which supports HDMI 1.4b output with HDCP 1.2, that’ll be updated to support 2160p resolution. We’ve spoken to Sky and they’ve told us we can expect sport and movies to provide the core 4K content, which was pretty much what we got when it made its big push with 3D.

Sky has finally revealed pricing for its new Sky Q box. And it’s quite confusing. So, the the basic Sky Q bundle costs £44 a month, and then it’s either £99 for the box if you’ve got Broadband from Sky, Sky Sports or Sky Movies or £249 without.

The Sky Q Siliver bundle starts at £56 a month, lets you stream in two rooms and on two tablet and will be compatible with 4K once that’s ready later in the year. Again, the box is £99, or £299 if you don’t take out broadband, movies or sports.

Sky says it’s £12 more a month than the older Sky+ HD plans, for the cheaper bundle. But we still don’t know how much it will be to add 4K services later in the year.

More storage to play with

The Sky Q will be available with 2TB of storage matching the largest capacity Sky+ HD box you can currently get hold of. As is always the case, you don’t have full access to all of that space. With the 2TB Sky Q box, there’s 1.7TB available, which Sky says is enough for 350 hours of HD recording. That’s in comparison to the 2TB Sky HD box, which offers 1.5TB of usable storage. So that’s little extra room for your Full HD and 4K shows. 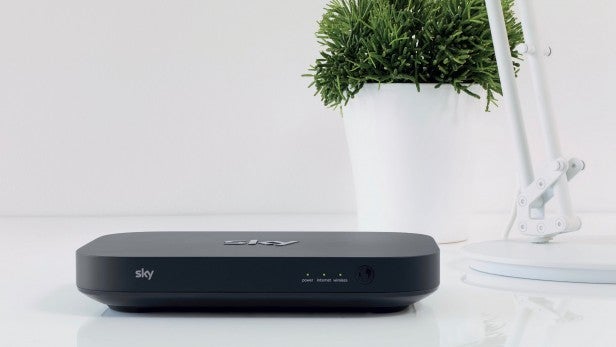 If you’ve got cables plugged into the Dish Input 1 and Dish Input 2 ports in your Sky+ HD box, you can record a maximum of two programmes at the same time. With the Sky Q box, that’s now grown to four, with the ability to watch another programme at the same time making it fit for the entire family. Additionally, the Sky Q service will also allow you to watch two shows at the same time using the Sky Q app or Sky’s new Q Mini boxes, which are basically like having an extra set-top box in another room. Only in a much sleeker design.

In the last couple of years Sky has added Wi-Fi support to its set top boxes both integrated into the hardware and via an additional adpater to access on deman services. With Sky Q, there’s support for 2.4GHZ and 5GHz dual band internet connections. Sky is also adding Bluetooth 4.0, which is used to connect the remote to the box and stream content from other devices. It could possibly open up the possibility of other Bluetooth hardware support in the future.

Sky has also added Apple AirPlay support so you can stream content like Spotify from your iPhone or iPad, plus the new box also adds Powerline connectivity support. That means you can utilize existing electrical cables in your home to spread internet connectivity throughout your living space and hopefully help improve coverage.

HDMI In is in

Somewhat surprisingly, among the physical connections added to the Sky Q box is an HDMI In port. So much like the Xbox One, you have both HDMI Out and HDMI In support. The former is pretty self explanatory. This is where you plug your box to your TV. The role of the HDMI In however is not entirely clear and Sky hasn’t explained how it will be used. We’d imagine it could be to support the ability to plug in a Blu-ray player or DVD player, making easier to switch between the two. We’ll let you know more once we’ve had clarification from Sky.

Related: Why Sky Q is meaningless to the Netflix generation 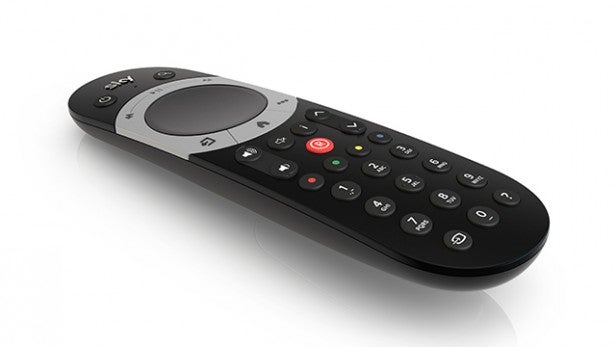 Getting touchy feely with the remote

The last time Sky gave its remote control a revamp was back in 2001, so it’s been long overdue a makeover. Swapping infrared for Bluetooth, the new Touch remote, which will land after the Sky Q box launch, adds a new touchpad to make it easier to navigate the revamped UI. There’s also a microphone built-in to add voice search although that functionality will be added at a later date.

If you’re always losing the remote, there’s a new Q button on the Sky Q that when pressed will send a beeping noise to the remote to help reunite you with your clicker. As far as existing features, there’s still a dedicated multi-function record button and it’ll still be able to control TV volume and turn the TV off when you’re done with your binging.

Away from live programming, Sky Q is going to push online content in a big way. Currently, you only have access to Sky’s own demand content, unlike Virgin’s Tivo box, which offers apps like Netflix and YouTube. With Sky Q, you can expect greater integration with Facebook to view your photos, the ability to view YouTube, stream music videos from a new Vevo app along with curated content from the likes of GQ, GoPro and Red Bull Media. If you want to keep in touch with the latest news and sport, there’s also new interactive sidebar apps to help you jump quickly into the content. 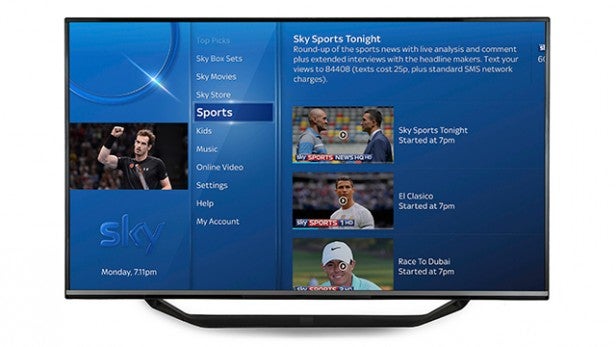 You can wave goodbye to the text-heavy user interface if you upgrade to the Sky Q box. Like Sky’s Now TV media streaming box, Sky is now moving to a more image-led UI with new sections and categories. There’s section for top picks and recommendations along with a new My Q section to let you know what shows you’ve watched at different times of the day and what shows you haven’t finished watching. Live, recorded and on demand content can now be universally searched making it quicker and easier to find what you’re looking for.

Along with a big Guide UI revamp, Sky is also turning its attention to support for mobile devices like tablets and smartphones. The Sky Q app, which will launch on smartphones first before landing on other devices, will introduce a raft of new features on top of existing Sky Go and Sky Go Extra features. You’ll still be able to view live and on demand TV and download shows (Sky Go Extra only). You’ll also be able to use your phone or tablet to activate voice search, pause viewing on your Sky Q box and resume on a Sky Q app-running device.

On paper, there’s a whole lot going for Sky Q. It’s made improvements in all the right places, adding future proofing features that should ensure the next generation set-top box is around for some time. It’s expensive, but then Sky has never really come cheap.