Which is the Best Virtual Assistant?

Digital assistants have been around for decades. Remember Clippy, the irritating Microsoft Word assistant, used as far back as 1997?

However, we are now starting to see them try to push their way into our day-to-day lives. The iPhone’s Siri, Android’s Google Now, and Windows 10’s Cortana are all highly advanced assistants, complete with artificial intelligence and remarkably accurate voice recognition. As long as you don’t have a thick accent, that is.

Now that Apple is set to introduce Siri to its Mac OS, we thought we might take a closer look at each of the digital assistants to find out which is the best of the lot.

Which phones use it? iPhones

How do you use it? You just press down on the main home button and wait for Siri to pop up. You can then talk to Siri, rather than typing into a box. She’s a good listener. You can choose her/his gender too.

It’s also possible to access some of Siri’s burgeoning pre-emptive suggestions by scrolling left from the main homescreen. This feature is nowhere near as advanced as Google Now as yet, but it’s there. 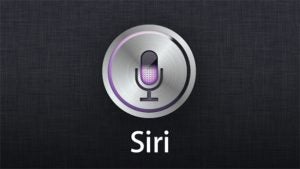 What can it not do?
• Send Facebook messages
• Interact with most third-party apps
• Pre-empt most of what you want
• Pull out info from your email 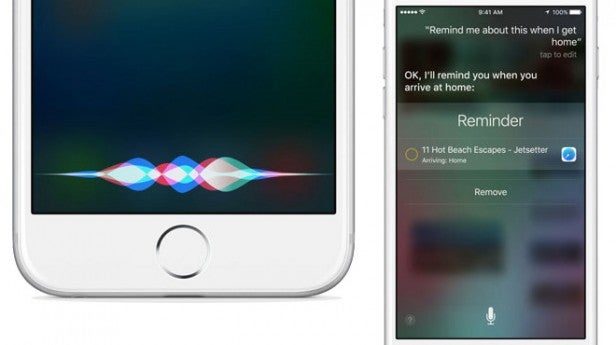 Is Siri any Good?
Siri is powered by some very interesting technology, which tries to understand not just your words but your sentences. Understanding meaning is a lot trickier than just identifying words.

It’s improved a lot with iOS 9, too. No longer is Siri a separate module within iOS, or one that exists merely because it’s cool. It’s now tightly integrated into Apple’s mobile OS, and has been rolled up with Spotlight Search into a dedicated screen to the left of the main home screen, Google Now-style.

This screen also shows off Siri’s newfound smarts, as it recommends contacts and apps, nearby services (through Apple Maps), and the latest news (via Apple News).

It’s still not as wide-ranging as Google Now, but Siri ties in better with the platform owner’s own apps.

Which phones use it? Android phones with version 4.1 or higher

How do you use it? It varies depending on the phone, but the consistent way to get Google Now up is to hold your finger down on the Home button until the Google button pops up. The Google Now Launcher, meanwhile, enables you to access it by dragging to the left of the main homescreen.

You don’t have to talk to Google Now – it’s not a primarily voice-driven assistant. Instead, it relays its information through info cards it gives you automatically. You don’t ask for these cards directly. Instead, Google Now pre-empts the sort of information you’ll need. Staples include the weather, the public transport route back home and new content on sites you’ve visited recently.

It’ll gather this information ‘organically’ as you use the phone, but you can tell Google Now about your preferences directly. You can let Now know about your favourite sports teams, the stocks you follow and where you work and live.

If you want to talk to Google Now, you can. Up at the top of the screen is a Google search bar, to the right of which is a little microphone to enable the voice feature. Some phones will listen out for an “OK Google” vocal prompt, too. 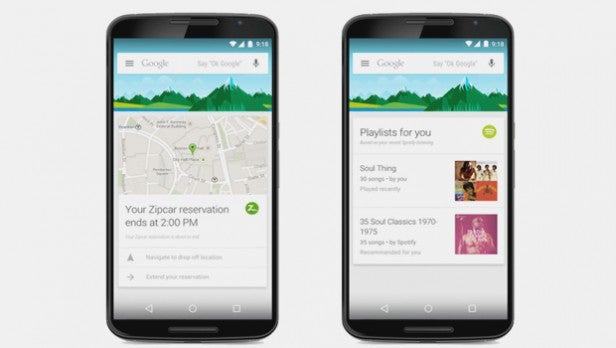 What can it do?
• Tell you the weather
• Tell you how to get home by car
• Tell you how get home on foot
• How to get home by bus/train
• Remind you about calendar events
• Notify you of emailed item dispatch notices, flight times etc
• Give you updates on your sports team
• Give you stock updates
• Offer info based on your web searches
• Lets you search the web with your voice/typing
• Launch contextual assistance based on what’s on screen (Android 6.0)
• Identify music
• Play music

What can it not do?
• Let you search for anything within the Now interface
• Search for photos 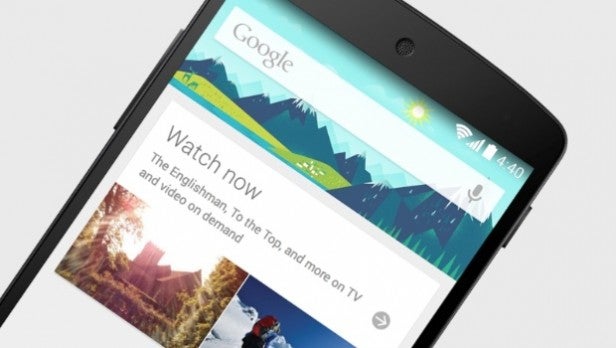 Is Google Now any good?

Google Now seems to have been built with the knowledge that not a great amount of people are that keen on using a voice assistant. Google has its own voice recognition and voice synthesis software that could have easily been made the front end of Google Now, but instead the voice feature is relegated. You can use it (there’s a mic icon at the top of the New screen), but it’s not really what Google Now is about.

The way it works can initially seem underwhelming, and we imagine that many Android owners don’t use it at all – even if they are signed up to use it. However, its laid-back style is rather less irritating and gimmicky than a voice assistant.

Since Android 6.0 Marshmallow, Google has introduced Google Now On Tap. This drags the platform out of its isolated screen and weaves it throughout the Android OS. Google Now On Tap gives you contextual assistance based on what’s on the screen at any one time. It’s a great idea, but Google’s initial implementation is too hit and miss to be truly useful. Watch this space, though.

Google Now arguably found its natural home as part of Google’s smartwatch platform. The information card-based system is at the heart of Android Wear, and feels like it was designed at least partially with the watch format in mind.

Which phones use it? Windows 10 phones (Cortana is also available on the desktop version of Windows 10)

How do you use it? Cortana is taking over as the Search part of Windows 10. It’s not just a speech assistant, but rather both a Siri-like voice assistant and an intelligent text analyser – so you can type, not just talk, to Cortana. You long-press the search button to make Cortana start listening, or a quick tap to type.

There’s also a Live Tile dedicated to the personal assistant, and you can configure a ‘Hey Cortana’ vocal prompt.

Cortana feels a bit like an amalgamation of the ideas behind Siri and Google Now. For example, you can tool Cortana up with information about your interests and life – such as your interests, hours when you don’t want to be disturbed, and so on. It also learns more about you based on your Bing search history. Or you can talk to it – your choice.

For a detailed walk-through of Cortana on Windows 10, see our ‘How to use Cortana‘ guide. 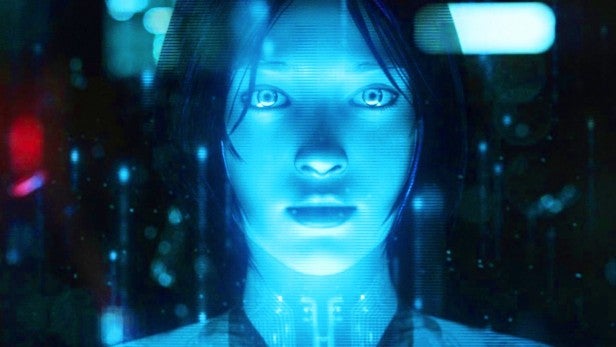 What can it do?
• Make calls
• Send text messages
• Search the web (using Bing)
• Show local events, restaurants, and the like
• Add/change calendar events
• Make notes
• Offer weather reports
• Tell you how long it’ll take to get to home/work
• Offer travel advice
• Identify music
• Check your flight status
• Set reminders when you next talk to a person 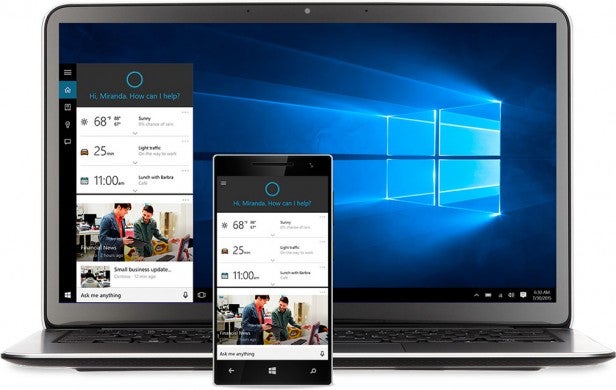 Is Cortana any good?

Cortana is arguably the most flexible personal assistant out there for the simple fact that it is built into the Windows 10 desktop OS as well as Windows 10 Mobile.

It mashes together some of the best bits of the other two, with the scheduling and email integration of Google Now and the personality of Siri.

However, Cortana is arguably the most hit and miss of the three in terms of results. When it works, it feels like it’s the best of the bunch – but it fails more frequently than Siri or Google Now.

It also has an over-reliance on simply offering up dumb web search results when Siri and Google Now (particularly the latter) will often try and contextualise or zoom in on a more precise answer.

Cortana feels like it’s in the earliest stage of development – because it is – so there’s plenty of scope for improvement here. It’s already handy in the way it tries to get to know your habits and interests, and being able to have it remind you of things the next time you talk to a specific contact is really cool. Right now however, it’s lacking a little polish and consistency.

So which is the best?

Cortana and Google Now are more clever and dynamic in their approach than Siri, which feels more like the ‘movie version’ of a virtual assistant than one people are actually likely to use. That’s improved in iOS 9, where Siri has been better integrated, but it’s still the least pro-active of the three assistants.

Siri does have the most personality of all three systems, however, and is the most comfortable with natural language.

Both Siri and Google Now are more consistent and slick experiences than Cortana, which is clearly the youngest of the three. Along with Google Now, however, its pre-emptive approach is pleasingly progressive, and it has bags of potential as both a desktop and mobile assistant – particularly when it comes to organising your daily schedule. 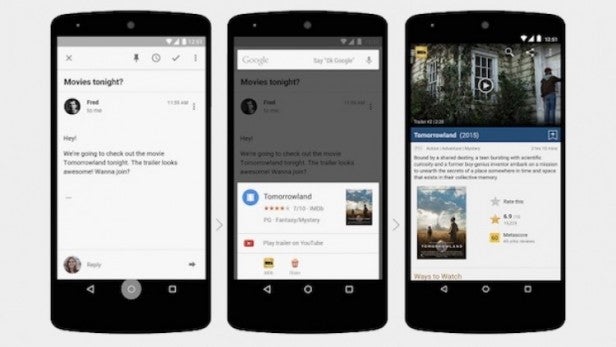 All of which means that Google Now is our pick for the best personal assistant of the three overall. It may lack the personality of the other two, but its consistency and accuracy approaches that of Siri, while its smartness and pro-activeness is top of the pile.

Meanwhile, Google Now on Tap shows that the system is going to become increasingly integral to the Android experience.

What are your thoughts on virtual assistants? Let us know in the comments below.