Sign In with Apple? More like V-sign at Google. While Apple was able to pack lots of practical and visually impressive things into its demo of iOS 13 during WWDC – things like a Face ID tune-up, Memojis, and new wireless music sharing service Share Audio – the most significant updates made were the company’s tightening up of user privacy.

In some apparent digs at Google and Facebook (but especially Google), director of product design Meg Frost took us through a refreshed version of Apple Maps, which features a new first-person perspective mode – dubbed ‘Look Around’ by Frost – giving you a “gorgeous, high-definition 3D view” of your surroundings. It is gorgeous, and it looks a lot like Google’s famous Street View, too.

The real kicker came seconds later though, courtesy of senior vice president of software, Craig Federighi, who said: “What’s most important is that [Apple] Maps has been designed to be private and secure. We always protect your identity and activity, and there’s no need to flip a switch to ask Maps to start respecting your privacy.”

Google wasn’t mentioned by name, but this is almost certainly a reference to the fact that last year, Google Maps was found to be harvesting location data even when you turned off location history – stopping Google from logging your steps required a bit more of a workaround.

Federighi wasn’t finished. “…at Apple, we believe that privacy is a fundamental human right, and we engineer it into everything we do. And this year, we’re doing even more.”

In iOS 13, apps requiring location information in order to work will have to ask you permission for location data every time. Alternatively, if you don’t fancy having to confirm or deny those requests each and every time, Federighi said that Apple will monitor what information services are saving, and will send you regular reports.

This way, if you’re not so keen on a company keeping tabs on you long after you’ve stopped using an app or service, you can make an informed choice to deny permission requests in future – or stop using that app altogether.

Again, without referring to Google – which has used Bluetooth to track Android users to better target them with ads – Federighi said “Some apps try to work around these protections by scanning for Bluetooth or Wi-Fi signals to infer your location – but we’re shutting the door on that abuse as well.”

Google’s introducing some much-needed security tune-ups with Android Q Beta 1, including tools that will limit app access to device information, which will also lock out scans of Bluetooth and Wi-Fi information as well as telephony and camera metadata

However, as is customary, Apple CEO Tim Cook began WWDC by pointing out how few Android users actually stand to benefit from such updates in the short term, highlighting that while 85% of iOS users are running the current most up to date version, iOS 12, just 10% of Android users have installed Android 9.0 Pie, which will eventually be succeeded by Android Q. 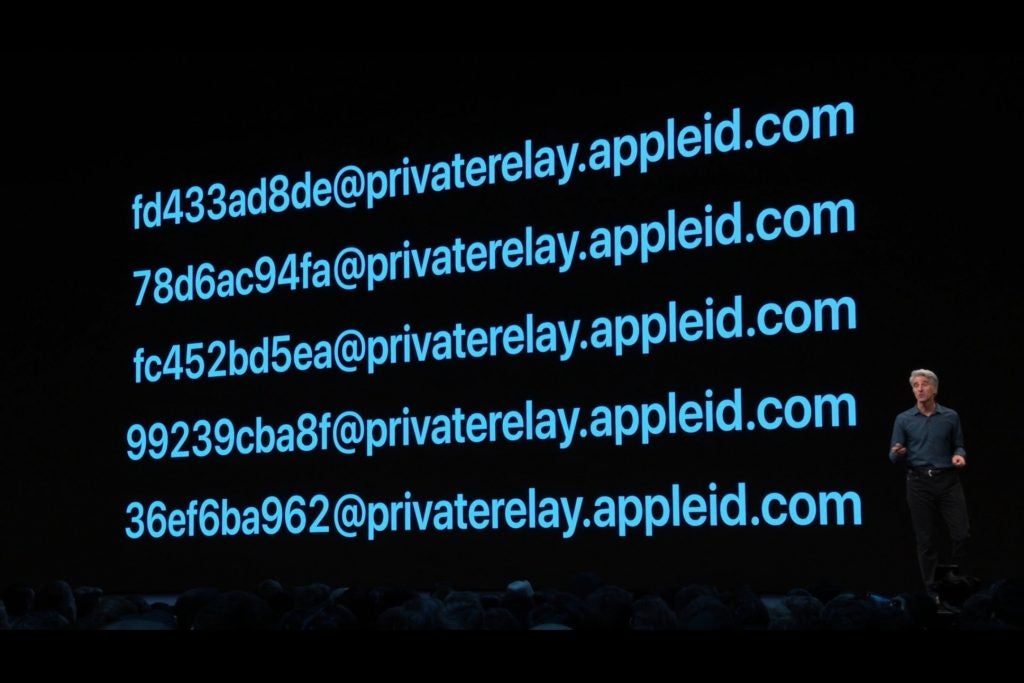 The next big nose-thumb came in the form of Sign In with Apple, the secure third party sign-in service.

This is “a fast, easy way to sign in without all the tracking” which uses Face ID to authenticate logins, and obfuscate your actual email address by creating a unique, randomised forwarding address for every app or service.

What’s more, a post on Apple’s developer site says that Sign In with Apple will be “required as an option for users in apps that support third-party sign-in when it is commercially available later this year.” So, no loose threads here.

Federighi went a step further. “This entire experience is meant to help you have control over your data.”

Gesturing at a slide depicting a MacBook, an iPad, iPhone and Apple Watch, Federighi said: “This [Sign In with Apple] is available across all of our platforms, and also on the web.”

Apple couldn’t have been any clearer to any potential customers anxious about the amount of data companies like Google have on them, regardless of the devices they’re using.

If you want to have greater control over your personal data, and to stop companies from tracking you when you’re not using their services, your choice of consumer technology ecosystem is obvious.