As the first Samsung device to introduce the ‘Ultra’ moniker, the Galaxy S20 Ultra marked a turning point for high-end flagship smartphones. But is the phone worth picking up over a year after its release? Let’s take a look.

It’s no secret that the Galaxy S20 Ultra stumbled out the gate when it first came to market. The eye-watering starting price of £1199 was difficult to stomach, and to make matters worse, the camera suffered from an autofocus problem that hampered the whole experience, despite the phone’s impressive specs on paper.

In the time since that debacle however, Samsung issued several patches to fix the autofocus issue and the once bank-busting price tag is now nowhere to be seen. In fact, it’s now fairly common to see the S20 Ultra available for under the £500 mark. I’ve been using the Galaxy S20 Ultra for a week now to see how it holds up in 2021, and here are my findings. 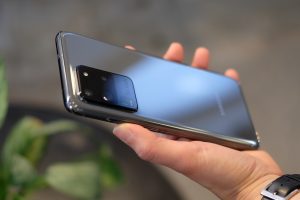 While it may have cost a fortune at launch, the Galaxy S20 Ultra 5G is now a fraction of its original price, making it an easy way of getting flagship specs on the cheap.

The massive 6.9-inch OLED display of the Galaxy S20 Ultra was always one of its strong suits, and that hasn’t changed at all. Just as trips into the office are becoming a regular occurrence again, I’ve been using the S20 Ultra to catch up on some Netflix shows during the daily commute. Having that larger display to show wide-screen content with minimal compromise feels like a huge step up from other phones.

The viewing experience is helped by a whopping 1400 nits of peak brightness, which really does make it feel like I’m carrying a mini TV in my pocket – and in more ways than one. Be aware that with that 6.9-inch display, the S20 Ultra is not for the small-handed or any small pockets for that matter. This is a hefty phone that requires two hands at all times for comfortable use.

Speedy enough for everyday use

It’s almost a given that all major flagships these days come with a Snapdragon 888 chipset included, but as the phone was released several months before the 888 ever made it to market, the Galaxy S20 Ultra packs an older processor.

In the US, the S20 Ultra shipped with the Snapdragon 865 processor, while folks in the UK received the Exynos 990. Having moved from a Snapdragon 888-powered Galaxy S21 for the purpose of this test, I did notice a slight decrease in overall speeds. However, this is an issue that won’t be felt by anyone who’s upgrading from an older device, like the Samsung Galaxy 8 or Samsung Galaxy 9.

In everyday use, the Galaxy S20 Ultra is still speedy enough that it doesn’t yet feel like an outdated phone. This is helped by the massive 12-16GB RAM that’s available (depending on which version you buy).

The camera can compete

Even against new contenders like the iPhone 13 Pro, the Galaxy S21 Ultra has stood its ground with some of the best smartphone cameras available right now – but what of the S20 Ultra? As previously mentioned, the once irritating autofocus issue now nowhere to seen, letting you enjoy the camera app without fuss.

Samsung’s signature saturated look makes a return here, but the style is elevated on the S20 Ultra. Outdoor shots with plenty of light just look phenomenal, and I found myself impressed by how the S20 Ultra could inject a serious amount of colour into an otherwise ordinary scene without feeling garish.

Portrait shots also have a good degree of competency to them, even if the bokeh effect isn’t quite as refined as it is on iPhone. There’s even a 40MP front-facing camera that imbues any selfies with a surprising amount of detail. Very rarely did I feel penalised for using the front-sensor.

Unfortunately, the same can’t be said for night-time photography, where the phone stumbles a bit. In outdoor scenes, particularly where there are still light sources available, the S20 Ultra can produce some fantastic shots – this snap from the River Thames is impressive, again for the amount of colour it’s managed to source from the scene. It’s during indoor scenes with low light that the S20 Ultra really struggles, coming away with blurry and uninspiring shots.

The 100x zoom is also just as daft as it first was upon release. Pictures taken from this perspective are so grainy that it usually just turns into a guessing game over what’s actually in the shot. You do get the ability to shoot footage in 8K, although this will really only appeal to people who already have an 8K TV in their possession.

Two days of battery life can be achieved

Living up to its ‘Ultra’ moniker, the S20 Ultra packs a massive 5000mAh battery. Even though that battery has to power all of the high-end specs of the S20 Ultra, it can still give you plenty of longevity – particularly if you find a new or unused model.

In some instances, I’ve been able to use the Galaxy S20 Ultra for almost two days before needing to find a charging outlet, meaning that at no point during the first of those two days was I ever worried that the battery might not hold out.

While many Samsung fans might have baulked at the idea of buying the once ludicrously expensive Galaxy S20 Ultra at launch, the high-end phone is now a far more tempting purchase in 2021.

Featuring one of the nicest screens I’ve ever used for watching content on the go, a fantastic camera array for daytime shots and massive two-day battery life, the Galaxy S20 Ultra is one of the best phones you can buy around the £500 mark.

While it may have cost a fortune at launch, the Galaxy S20 Ultra 5G is now a fraction of its original price, making it an easy way of getting flagship specs on the cheap.