What is Tizen OS?

Tizen has been in development for years. We
saw some phones running it at Mobile World Congress in Barcelona in
February, where Samung also announced the Tizen-powered Samsung Gear 2 and Gear 2 Neo. Finally Samsung has launched the world’s first Tizen OS smartphone in Russia —  the Samsung Z.

Up
until now Samsung has been using Google’s Android OS to run its range
of Galaxy smartphones and tablets. However, the Korean manufacturer has
confirmed its intent to go it alone, offering an alternative to Google’s
mobile OS, iOS and Windows Phone.

So how does Tizen differ from Android? Here’s six things we know so far about the operating system that joins Firefox OS, Jolla Sailfish and Ubuntu Touch in the bid to shake things up.

We were quite impressed by Tizen. If you want an in-depth view you can read our preview and first impressions of Tizen, for a quick overview read on.

Samsung
has worked with Intel to develop Tizen. It is Linux-based platform built from Nokia and Intel’s ditched MeeGo. The fact it is open-source, like Android, means that hardware manufacturers that choose to adopt it are
free to tinker with the interface and the UI to make it as unique as
they like.

Samsung has also taken some of the more interesting
features that cropped up in Bada, its first attempt to go it alone on an
operating sytem and built them into Tizen.

Tizen
is a HTML5-based operating system. This is good news for content creators since
the platform should allow for shorter development cycles, works intuitively with the web and should lower the cost of making apps.

For the user, it means we can expect
slicker mobile web applications for phones and tablets. There should be
greater native support for video, in particular, so you’ll no longer have to
download plug-ins to watch YouTube clips or to listen to a
song.

the real question as to whether users will adopt Tizen has to do with how intuitive and experience it will provide. Can it be as user-friendly as iOS or Android’s 4.4 Kitkat
operating systems? In its latest guise 2.2.1, Tizen doesn’t look
entirely different from a TouchWiz-layered Android as our Tizen first
look video above shows.

Running on a prototype phone, you can
see that Dynamic boxes play a big part in the overall feel of the UI and
can be re-sized to reveal more information from the app.

Tizen will also include the swipe down notification bar with toggle bar as used in the
TouchWiz UI and is set to support multitasking, integrated power
saving, a firewall to block sites and other features already
available in current Samsung phones.

4. It’s not just for smartphones

The
operating system aims to offer a unified experience across multiple
devices, so expect to see it featured in TVs, laptops and even crop in
the ‘bank and car industries’ according to Samsung Electronics co-CEO
J.K. Shin.

Tablets running Tizen have already reached the hands
of developers and the operating system has also been demoed running
inside in-car entertainment systems. The first official Tizen device,
the 20.3-megapixel Samsung NX300M camera was announced in late 2013. Now we have the first Tizen smartphone too.

As
we’ve seen with Windows 8/Windows Phone 8, apps are a very big deal the growth and success of any new operating system. The good news is that Tizen will support
native and web apps just as it did for Bada and existing Bada apps will
also be ported over. Cut the Rope and Gameloft’s Asphalt 7 are already
set for the open Tizen Store and gives you an idea of the calibre of
content you can expect at launch.

To help make sure the app
catalogue is fully stocked, Samsung also launched a Tizen app challenge
in 2013 handing out $4 million to the 64 winners who created a both
native Tizen apps and HTML5-based applications. 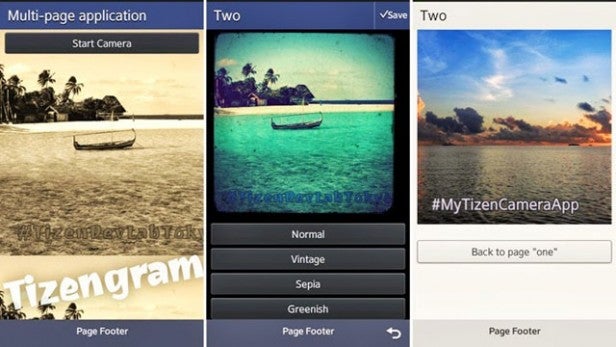 6. The future of Tizen

While Samusng has dipped its toe in the water with its first devices running the OS there’s still a long way to go before we see it as the main platform.  Will we see it in the Samsung Galaxy S6? It’s too early to tell but the Galaxy S5 maker is lloking at where to go next with Tizen. Version 3.0 is already in the works and some details were revealed at its Tizen developer summit back in late 2013, including support for 64-bit processors. We know that Google is also busy getting ready to release a 64-bit enabled version of Android.

Like Android, there will be multi-user profiles as well
as support for games and app that require more advanced 3D graphics.
This update is expected in early 2015.

Are you sold on the Tizen OS? Do you think it will be a success? Let us know your thoughts in the comments section below.