OPINION: What’s at stake for Microsoft and Windows 9?

Samsung has earned a reputation as a company for whom no consumer tech niche is too small.

Think about it. The firm has hundreds of smartphones and tablets in every conceivable size, spec set and price point. If you want it, Samsung has got it in three fetching colours.

There are curved screen phones, a phablet with an edge screen, optical zoom compact cameras with smartphones attached to the back, approximately 915,636 Galaxy ranges, umpteen variants of smartwatches no-one is buying, curved OLED televisions, virtual reality headsets and everything in between.

Indeed, the company’s willingness to cater to everyone makes last week’s decision to give up on the European laptop market a stunning blow for the faltering PC industry.

If the laptop sector is performing so badly that even a massively profitable company like Samsung is unwilling to tolerate any losses in order to stay the course, then what does that say for the future of our trusty notebooks?

What does this mean for Windows 9?

That decision has huge knock-on effects. It’s a massive cause for concern for Microsoft, it’s hugely worrying for chipmakers like Intel who’ve struggled to break into the mobile market, and very ominous for companies like Dell and HP for whom so much more rests on the prosperity PC industry.

All of this brings us neatly to Windows 9, which will be unveiled by Microsoft at a special event tomorrow. After the disappointing consumer reaction to Windows 8, the stakes are sky high.

If Windows 9 doesn’t convince users that a laptop is still the best way to combine productivity and portability, will there be many major manufacturers even making notebooks by the time Windows 10 rolls around?

However, it’s not obituary time just yet. In my opinion, there are enough reasons to believe Microsoft can and will find the winning formula for Windows 9.

Microsoft is making the right moves

Firstly, the company rarely makes the same mistakes twice. Before Windows 8, the last time Microsoft gave Windows a massive overhaul was Vista. Following that debacle, it rebounded with Windows 7, the most popular operating system in history. I’m not betting against the firm doing it again, especially with the decisive Satya ‘yeah, let’s unbundle that Kinect sensor’ Nadella at the helm.

With that in mind, Windows 9 looks certain to offer an experience that’s actually attractive to desktop and laptop users; a modern product that improves their productivity rather than slows it to a crawl. 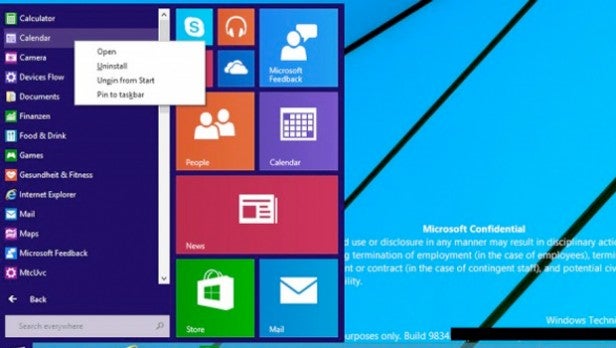 Leaked screenshots of the company’s technical build have shown it is bringing back the trusted Start Menu, which promises to be highly customizable and include the option to add Windows 8 live tiles on the right hand side. This, plus the ability to run ‘Metro-style’ apps in a window, rather than full screen, means Windows 9 will maintain some of Windows 8’s identity, while improving on the experience exponentially.

Curtainling the need for desktop to struggle on with Metro when using a mouse and keyboard will be a key to success. Microsoft seems ready to admit that a separate experience is needed for desktop and touchscreen. If Microsoft gets that balance right Windows 9 can finally be the master of all trades that Windows 8 was intended to be.

These adjustments aren’t the be-all-end-all solution but they will give those folks unwilling to leave their Windows 7 and Windows XP (XP still has a 24 per cent market share compared with Windows 8’s of around 13.5) machine behind something to hang their hats on and, importantly, buy new laptops or hybrids!

Don’t forget the Cortana wildcard either. Never has a desktop OS that integrated voice input with any modicum of success. The time has come for a smart personal assistant, worthy of the name, on a device that is truly designed to aid productivity.

“Pull up that email”
“When’s that appointment?”
“File this here”
“Where is this saved?”
“Turn on my do not disturb”
“Print this document”
“Order my lunch from Dominos”

Sounds pretty great to me.

The Grim Reaper may be ironing his cloak and sharpening his scythe just in case, but with Windows 9 baked in to some innovative new hardware solutions that combine desktop, touch, portability and productivity, the laptop could thrive for years to come.

Next, read how the iPhone 6 could kill the wallet