Gear Fit 2 vs Gear Fit: How has Samsung updated its quirky fitness band for 2016?

One of Samsung’s weirder products from recent years was the Gear Fit. A strange fitness band and smartwatch hybrid that looked good at first, but failed to impress thanks to dodgy sensors and an uneven battery life.

Sammy clearly thinks it’s a product worth improving though, as it’s just unveiled the Gear Fit 2. What’s changed, we hear you cry? Quite a lot actually. 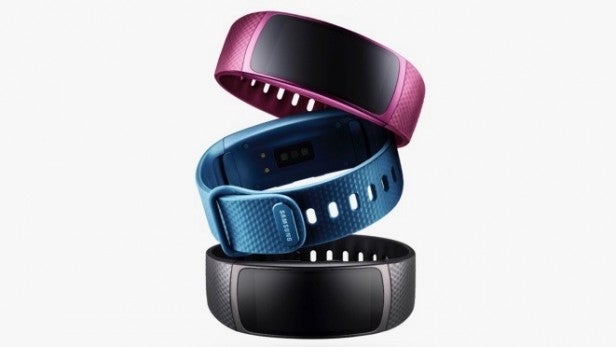 There’s now GPS onboard, and it’s much more focused on sport

For us, the standout update to the Gear Fit is the addition of GPS. A vital feature for those looking to actually track their runs without needing a tethered smartphone, adding GPS puts the Gear 2 right up against devices like the fantastic Garmin Vivosmart HR+ and Microsoft’s equally impressive Band 2.

We tend to rate fitness bands higher when they posses this tracking tech, so let’s see if that if that continues with the Gear Fit 2.

You’ll also be able to directly track your runs on the device itself and see your route on the display, another bonus.

The other sensors are the same as last time (heart-rate sensor, gyroscope, barometer) but we’d really hope the HRM is much more accurate, as that was one of our major concerns before. S Health has also been upgraded to support auto-workout tracking, so it’ll kick into gear and jump to the right activity without you having to manually select it.

The innards have been spruced up

Considering it comes in the shell of a fitness band, the Gear Fit 2 is a powerful piece of kit and a nice improvement over the original.

Specs wise you’re looking at a 1.55-inch, 216 x 432 pixel AMOLED display, a Samsung 1GHz dual-core processor, 512MB RAM and 4GB of internal storage (up from 2GB). It’s all running on Tizen too, though app support seems to be limited currently.

That’s a nice improvement in the screen department, with the previous Gear Fit having a lower-res 432 x 128 panel. A bump, albeit minor, in resolution is always welcome and it should make the band easier to read while off gallivanting through the countryside.

That curved AMOLED display is actually smaller than before, moving down from 1.84-inches to 1.5-inches. 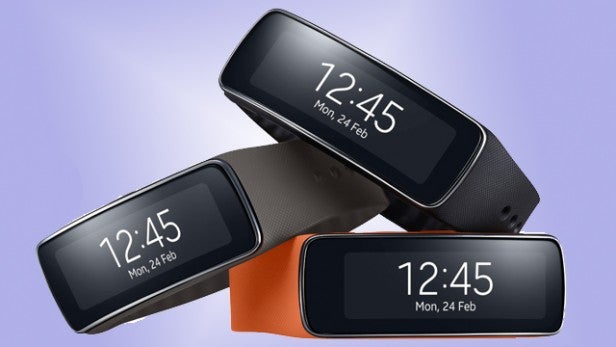 The overall design is very similar

Samsung hasn’t really changed a whole lot regarding the design of the Gear Fit 2. It’s still a slim cuff that sits on your wrist with a vertical display, but it certainly looks a lot more sporty this time around.

The elastomer strap should hopefully do its best to avoid sweat sticking around and the glass covering the display has been bumped to Gorilla Glass 3 for a hit more protection.

Samsung has slightly improved the water-resistance rating, moving from IP67 to IP68 and making it a little more usable for swimmers. You’ll be able to take it down to a depth of 1.5 meters for 30-minutes, which is helpful.

While the Gear Fit 2 is the same overall size as its outgoing predecessor, it now comes in two sizes. There’s ‘small’, which should cover wrists 125-170mm, and ‘large’ (155-210mm). Having multiple sizes is becoming a trend with wearables, ensuring you’re not frozen out because of your dainty or pudgy wrists.

It can act as a standalone music player, and there’s a Spotify app

Keeping with the sporty theme that’s running throughout the Gear Fit 2, there’s now support for direct music playback from the 4GB of internal storage. Pair this with the GPS and you can leave your phone at home, without sacrificing your tunes and tracking.

Of course, you’ll need a pair of wireless Bluetooth buds to connect up to the Gear Fit – maybe a set of Sammy’s new Gear IconX earphones?

Probably of more interest is the dedicated Spotify app – which also happens to be the only third-party app – for controlling music from your phone. Unlike the Pebble Core though, you won’t be able to download and sync playlists for offline listening. Boo.

The battery is smaller, but it works with more devices

The original Gear Fit had a 210 mAh cell keeping it running, but the Gear Fit 2 drops that to a 200 mAh version. Samsung says you should get three to four hours of juice, but that will diminish rapidly if you’re using GPS.

On a happier note, the Gear Fit 2 is now compatible with all Android 4.4 device rather than being restricted to a bunch of Galaxy phones. There’s still no iOS support, though.

The Gear Fit never really felt like a fully realised product, and in some ways it’s surprising to see a follow-up at all. Yet the Gear Fit 2 does already seem to have more selling points. The addition of GPS is a big one, with improved fitness software and a more sporty look putting it right up against the Microsoft Band 2. We’ve not had confirmed pricing details yet, but that will also play a big part in how tempting this wearable is.