The Samsung Galaxy S7 is without doubt the biggest smartphone launch of the year so far. LG might have something to say about that, but we’re not expecting the G5 until April.

If you’re already a proud owner of the Galaxy S6, should be getting your wallet out in anticipation of an upgrade?

Samsung arguably created its first truly beautiful, premium design phone last year, and it looks to have done the same with the follow up. But what’s changed? That’s the question we’re going to answer here.

Read also: iPhone 7: What you need to know

Samsung Galaxy S7 vs S6: A similar design, but we’re ok with that

After years of plastic, creaky and just rather ugly phones, the Galaxy S6 changed everything for Samsung. It was slick, metal and matched the iPhone for sheer high-end feel.

With the S6 being such a design departure for Samsung, it never looked like like the Korean company would be trying anything similar this time around. Apple keeps the same phone look for two years, so there’s no reason why Samsung couldn’t do the same thing again.

On the surface, the Samsung Galaxy S7 looks almost identical to the S6 but there are a few key differences.

The SIM-tray too has repositioned to the top and the home button has ever so slightly been squared off.

Flip it over and there’s another big change, the camera hump no longer sticks out. It’s now flush with the glass, which is a godsend if you’re a fan of knocking out an email with your phone on the desk.

If we were being really critical, we would say that in a perfect world Samsung would have ditched the glass back for something less delicate. But that’s picking at straws, the S7 is a beautifully designed phone.

Samsung has also managed to reintroduce waterproofing to the series. The S7 can be submerged in 1m of water for 30 minutes, and there’s no pesky seals taking away from the slick design. 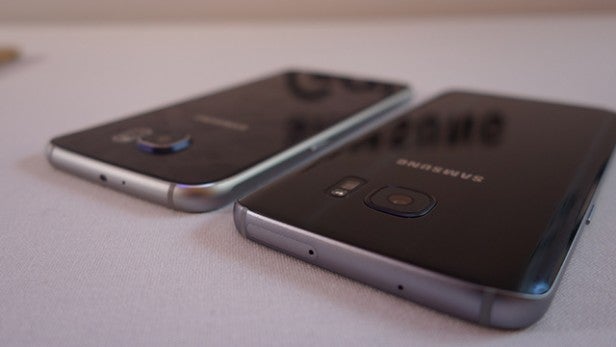 Samsung Galaxy S7 vs S6: Samsung is going back to Qualcomm, but not in the UK

After relying on Qualcomm and its hugely popular Snapdragon range of processors for the previous iterations of the Galaxy series, Samsung switched things up last year ditching the overheating 810 chip and using its own house-built Exynos processors.

This turned out to be a great, and very smart, move. The Snapdragon 810 seemed to hinder competing phones like HTC’s One M9, while the S6 soared through benchmarks and has performed admirably for us all year.

As most rumours suggested though, Samsung will be going back to Qualcomm for the S7, but not in the UK.

It’ll use the Snapdragon 820 in America and the Exynos 8890 in other regions, but with a few modifications including the addition of a liquid cooling heat pipe. Samsung were a little cagey on exactly how this works, but it should essentially keep everything cool when you’re gaming.

The processor is paired with 4GB RAM, that’s a 1GB increase upon last year and the same as both the Note 5 and S6 Edge.

There’s a huge improvement in benchmarked performance and a small jump in day to day use. But, the S6 is still a fast phone so the upgrades here are probably worth the change alone. 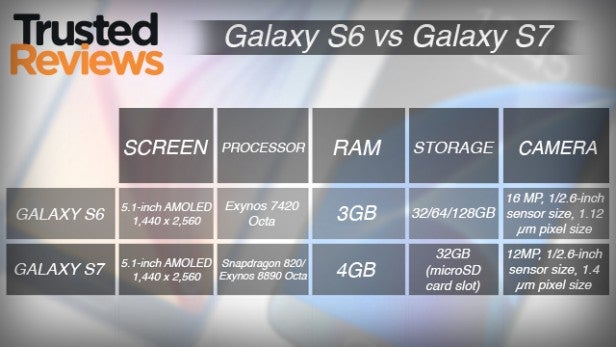 Samsung Galaxy S7 vs S6: The screens are pretty much the same

The Samsung Galaxy S6 and S6 Edge originally came in just one size, a 5.1-inch version. That was later joined by a larger Edge variant, the S6 Edge .

Samsung is sticking with the 5.1-inch quad-HD Super AMOLED display this time around, which is nothing to complain about.

The viewing angles are fantastic, colours bright without being oversaturated and it’s just a joy to look at. It’s easily one of the best smartphone screens around. 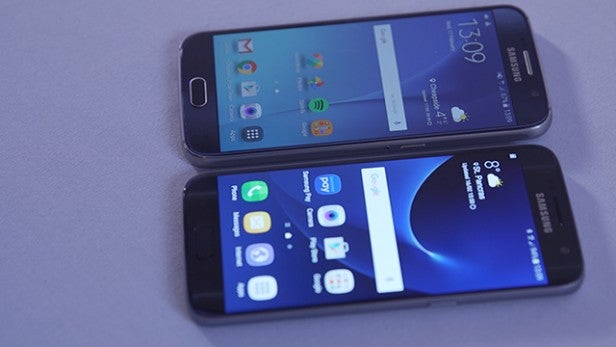 One new feature to appear this year is an always-on screen, so you can whip the phone out of your pocket and scan the time and if you’ve got any notifications without turning the whole display on.

Last year’s Galaxy S6 was a great phone, but it was let down by poor battery life.

The non-removable 2,550 mAh battery was a big drop on the 2,800 mAh cell that sat inside the S5, and that was removable so you could always keep a spare around.

Thankfully this year will see a battery life boost. Samsung has upped the battery spec to 3,000 mAh, and it’ll get you through the day.

Wireless charging is supported, and it’s slightly faster than before, and there’s adaptive fast charging too if you use the right cable and plug. 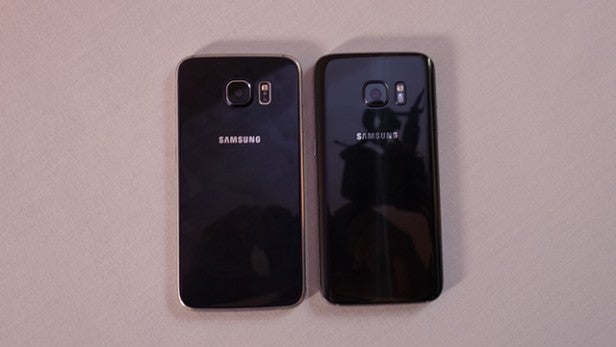 Samsung Galaxy S7 vs S6: A lot has changed in the camera department

The biggest news in the camera department is that it has actually seen a megapixel drop, going from 16MP in the S6 to 12MP. Now, don’t get angry just yet – this isn’t necessarily a bad thing.

Remember, the iPhone 6S – one of the best performing smartphone cameras around – also has a 12MP camera.

Samsung has completely rebuilt the sensor, making it much smaller yet without sacrificing any of the functionality. It says shots should be 95% brighter and the low-light autofocus has been dramatically improved. On the front there’s the same 5MP camera.

Just like we mentioned in the performance section, the Galaxy S7 doesn’t make a huge improvement to the overall picture quality of the S6. Daylight pictures still look gorgeous, but low-light is better and auto-focus is much faster.

Samsung Galaxy S7 vs S6: Pricing is a little cheaper this time

Back when the Galaxy S6 launched, Samsung’s newfound design chops came at a cost. Prices started from £599 for the entry-level 32GB model.

It’s still expensive, then, but at least it’s not quite as bad as before. Of course, you can currently pick a 32GB Samsung Galaxy S6 up through Samsung’s official website for £379, and it remains one of the best smartphones on the market. If you don’t demand the very latest tech, it’s a good buy.

It’s true, we’re mightily excited by the Samsung Galaxy S7. Even though it almost mimics an Apple ‘S’ release with minimal changes, there are enough new additions to make it a worthwhile update.

Adding back in the microSD slot is important, while making it waterproof is a nifty addition. Jacking up the size of the battery should also be key in making this an even better phone than the S6.

Then when you factor in the, hopefully, improved camera, speedier processor and cool always on display, you’ve got yourself a pretty impressive upgrade.