What is Britecell? Samsung’s tech to make the Galaxy S7 the best cameraphone yet

Samsung usually tries to stay as tight-lipped as possible about its phones before they’re announced. Officially, anyway. Leaks that tell you absolutely everything spoil the surprise, but always appear. However, Samsung detailed the hardware that will likely make up the Galaxy S7 camera months ago.

We’re talking about Samsung Britecell, a new sensor design style that we’ll probably see a whole bunch of times in 2016 Samsung phones. You could call it the follow-up to ISOCELL, the sensor style Samsung introduced with the Galaxy S5.

We’ll dig much deeper into how it works, but in a sentence: Britecell will give mobile phone camera sensors much better low-light performance for their size. Given low-light photography is the one thing phones are still pretty bad at, we’re excited. 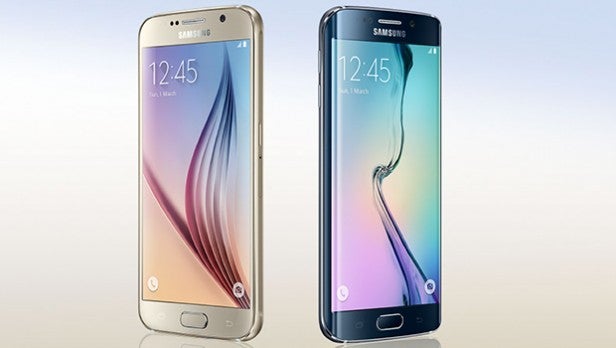 One of the main aims of Britecell is something that might make you sigh, though. A big part of its mission statement is to let phone camera sensors get smaller, while still progressing in image quality and resolution terms.

This is the problem with phone sensors. How do you make them take better photos when, with traditional sensors, the bigger its light-harvesting area is, the stronger its pictures are likely to be?

The major design change is that in place of green sensor pixels, Britecell has white/clear ones. To really ‘get’ what this means, we have to look a bit closer at how a camera sensor works.

Before light hits the sensor, which is the component that nabs the light with which to construct a photo, it passes through a colour filter. These separate the light into red, green and blue, similar in one sense to the red, green and blue sub pixels that make up your phone’s screen. 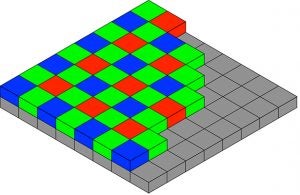 You can also think of it as a bit like a stained glass window, that filter component. It’s called a Bayer filter. And you normally get two green zones, one red one and a blue one in sequence. These four pixels are then interpolated to create one full piece of colour info.

By switching green for a clear or ‘white’ subpixel, the sensor actually receives more light per, say, square millimetre because those white pixels aren’t just getting the green we’re missing, but more red and blue light too. As you know, white is actually all colours smushed together.

The difficulty here is that the image processor has to pull out, to extrapolate, that green colour channel information because it’s not separated out as usual. Phone cameras are as great as they are because of clever processing, and it seems Samsung is just taking that a step further.

Related: Android 6.0 Marshmallow – When will your phone get it? 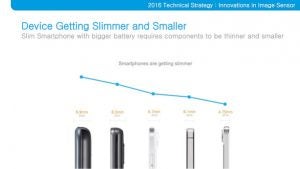 Samsung says the Britecell sensor is 17 per cent less tall than the current standard, which will — no surprise — let the Samsung Galaxy S7 get even slimmer than the already-skinny Samsung Galaxy S6.

We know more already, too. The Britecell cameras talked about in November 2015 have a resolution of 20 megapixels, up from 16 in the Note 5, Galaxy S6 and the other most recent top Samsungs.

Despite the extra resolution, the sensor area will be smaller, because its sensor pixels are reduced from 1.12 microns to just 1.0 micron.

Samsung’s claim is that you get “enhanced light sensitivity in low light condition with less color artifact,” even though news of smaller effective sensor area is the sort of thing that starts alarm bells sounding. 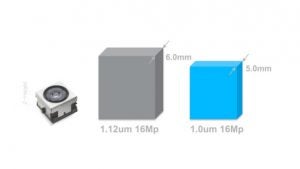 This is by no means the first time we’ve seen this sort of technology detailed. Back in 2013, the Motorola Moto X used a red-green-blue filter array plus another clear pixel. The idea was that this would get you much better low-light sensitivity.

It didn’t work tremendously well, though. We’ve found large sensor sizes and OIS to be far more desirable. But, hey, Samsung knows how to work a mobile phone camera sensor.

Since then we’ve also seen RGBW Sony sensors in several Huawei phones, including the Ascend P8 and Mate S. They have good but not world-beating cameras. 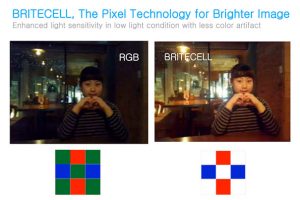 After the Moto X appeared, Sony detailed somewhat-comparable technology called APCS in 2014, or active pixel colour sampling. What this does is to use a moving colour filter so that you get full colour information for every pixel on the sensor, not just one tone for each.

Sony APCS is really another take on the future, of the camera sensor, and one a bit more dynamic than Samsung Britecell. There’s still interpolation involved with Britecell, after all. However, after speculation that a Sony Xperia Z-series phone might use an APCS sensor a couple of years ago, Sony’s top phones have actually used relatively conventional hardware. APCS is still AWOL.

Britecell is really here to mitigate the performance hit you get when shrinking a sensor. However, Samsung also talked about something else called WDR, wide dynamic range, in November. You’re probably familiar with HDR, high dynamic range, but this would appear to be a self-identified next-gen take on the same idea.

Oddly enough, Samsung security cameras use the same terminology, but it’s fairly safe to assume the Samsung Galaxy S7’s take on it will be something quite separate. It’s a multi-exposure mode that’ll make shadow detail far more prominent.

This will, of course, be used to further show off Britecell’s dynamic range abilities. Even if the results owe more to clever processing than the Galaxy S7’s actual hardware.

Any other tricks up Britecell’s sleeve? The other important feature is phase detection autofocus, something becoming more common by the month in top-end phones.

This is the sort of focusing system you get in DSLRs, but here it’s built right into the sensor. Other phones use just plain contrast detection, which is where the output from the sensor is assessed, and then the focus point of highest contrast is found, which is also the point at which the image appears sharpest. Phase detection assesses the phase of the incoming light to check focus, getting rid of the back-forth ‘seeking’ you always get with contrast detection.

It’s most likely a hybrid system, a lot like what you get on some compact system cameras (these are like a middle ground in-between compact cameras and DSLRs). A phone won’t always use phase detection because it doesn’t cover the whole sensor, and even when it almost does, I still end up seeing the tell-tale signs of contrast detection focus in use.

The latest Sony sensors offer 192 phase detection autofocus points, though, which is extremely impressive. Isn’t it?

How good does Britecell sound?

In its current form at least, Britecell seems to be about letting camera sensor tech move in-line with the design trends in mobile, towards progressively skinnier frames. That it seems we’re going to get an extra four megapixels to play with too is nice, but any leap in image quality is really going to be down to software smarts, which Britecell relies heavily on.

Even with all the software smarts in the world, the Samsung Galaxy S7 is definitely still going to need a stabilised lens to match or better phones like the S6 Edge and Note 5. Given most of Samsung’s latest have this feature, though, we’ll be very surprised and even more disappointed if it’s not on-board.

Are you excited about the S7 camera? Let us know in the comments box below