Every year, we get a new Samsung Galaxy S-series flagship and a new Note phone to back it up. We’ve had the Samsung Galaxy S5 for a good half-year, but only now have we been officially introduced to the Galaxy Note 4.

It is not completely different, but if you’re out for a new phone and like the sound of these two, you definitely need to check out this in-depth comparison.

We’ve complained every year about Samsung’s phone designs. They just don’t feel as expensive as they should, not when you often pay £500 or more for the very top-end phones – as it was with the just-released Galaxy S5 earlier this year.

However, Samsung is turning things around. With the Note 4 it is starting to embrace metal, trading-in the naff silver plastic trim of the Galaxy S5 for the real real.

The back uses the more familiar textured plastic, with a leather-like finish, but this helps keep the weight down. Metal is heavier than plastic, and it’s one of the reasons why the HTC One M8 is so much heavier than the Galaxy S5.

Using metal sides, the Note 4 has a slightly better in-hand feel than the Galaxy S5. However, we also find the Galaxy S5 much easier to handle.

While the Note 4 is impressively small given its screen size, it’s still a massive phone. Something with a 5.7-inch screen can only get so small.

If you’re new to large phones or have small hands, you should seriously think twice about getting a Note 4. Don’t say say didn’t warn you. 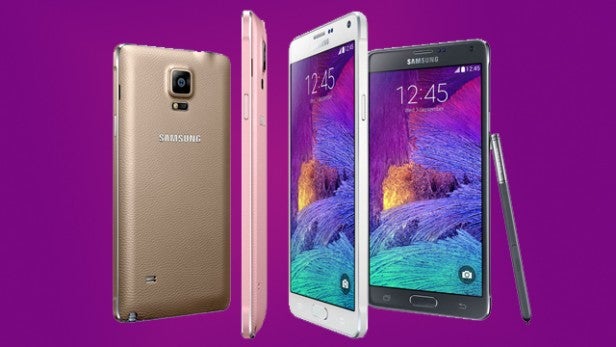 High-end Samsung Galaxy phones are a feature fiend’s dream. There’s a whole lot going on under the hoods of these phones. However, the Note 4 has even more than the Galaxy S5.

The main thing to check out is, of course, the Note 4’s S Pen. This is a digitiser stylus that communicates with a special layer in the phone’s screen. It’s anything but a dumb pen.

It’s pressure sensitive and can be sensed by the Note 4 when it’s a good centimetre or so away from the screen. As such, for doodling or note-taking in the traditional way, the Note 4 is far, far better than the Galaxy S5.

We also love that the S Pen fits into a slot on the phone.

Other than this, the phones both have a fantastically wide array of extras. The two Samsung specials are the heart rate sensor and the fingerprint scanner.

The heart rate sensor lives on the back by the camera, and the fingerprint scanner underneath the main Home button on the front. They’re not essentials, but they are nice little extras.

More commonplace hardware extras include the IR transmitter, Wi-Fi ac and NFC. There’s very little that gets by these phones.

The most obvious difference between the Galaxy S5 and Note 4 screens is that they the latter’s is much, much larger. The Note series has always been in a different size class to the Galaxy S phones, because they’re after slightly difference audiences.

We’ve found that Note phones appeal to both  the geekier crowd and people who tend to keep their phone in a handbag rather than a pocket – they’re not just for nerds. Do keep in mind that the Note 4 is a real pocket-filler, though.

If you don’t mind about the negative impact of the sheer screen size of the Note 4, it’s clearly the better display of the two. Both use the same core Super AMOLED screen tech, but thanks to a seriously high-resolution panel, the Note offers higher pixel density despite being a lot larger.

Both screen are sharp, but the Note 4 has even more pristine images when you get real close-up.

As you’d expect of two top Super AMOLED screens, contrast and black level are superb in both the Galaxy S5 and Note 4. Colour accuracy is good too, as long as you pick the right mode. As usual for a top-end Samsung phone, you can choose between a few different display modes that alter the character of the screen quite significantly. 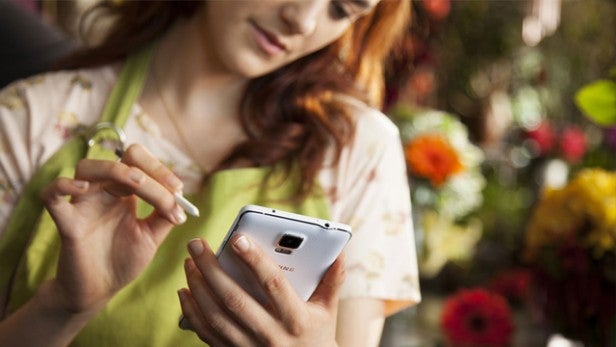 There are a couple of different variations of the Note 4 and Galaxy S5, but the ones we’re most likely to see in the UK are the Qualcomm Snapdragon versions. The Galaxy S5 uses a Snapdragon 801 2.5GHz chipset, Note 4 a Snapdragon 805 2.7GHz CPU. Both are quad-core processors. Both are very snappy.

However, there’s not quite the generational leap in performance you might be expecting, not in pure CPU power at least.

The Snapdragon 805’s CPU part is actually very similar to the Snapdragon 801’s, with the same core architecture that uses a 32-bit brain rather than a 64-bit one. We’ll see more technically advanced chipsets appear in 2015.

Where there’s a bigger advance is in the GPU part of the chipset. The Note 4’s Adreno 420 GPU is about 40 per cent more powerful than the Adreno 330 of the Galaxy S5.

Of course, it really needs this power because it has such a higher-resolution screen. The extra GPU power means than when developers start really optimising high-end games for screens like the LG G3’s and Note 4’s – those with absolutely loads of pixels – the phone will have the power needed to keep up.

The Samsung Galaxy S5 and Note 4 both have 16-megapixel sensors. However, they’re two very different sensors.

Where the Galaxy S5 uses a camera sensor made by Samsung, using its fancy new(ish) ISOCELL technology, the Note 4 uses a Sony IMX240 sensor. We imagine this may be because Samsung’s camera sensor division is already stretched keeping up with Galaxy S5 production, not to mention having to work on the upcoming Galaxy S6’s camera sensor.

While the Note 4’s performance may not be quite up to the Galaxy S5’s because of its more traditional sensor style, we expect the phone to be a top performer. And it has something the Galaxy S5 lacks – optical image stabilisation. This should give it better low-light performance than the Galaxy S5.

We find that the Galaxy S5 can produce pretty decent low-light photos, but it is rather slow when the lights go down. This should be more-or-less fixed with OIS if it’s implemented properly.

However, the Note 4 doesn’t have one other special feature that the Galaxy S5 does have – hybrid phase detection autofocus. This kind of focusing is used by DSLRs, as is quicker than the pure contrast detect autofocus used in most phones, including the Note 4. 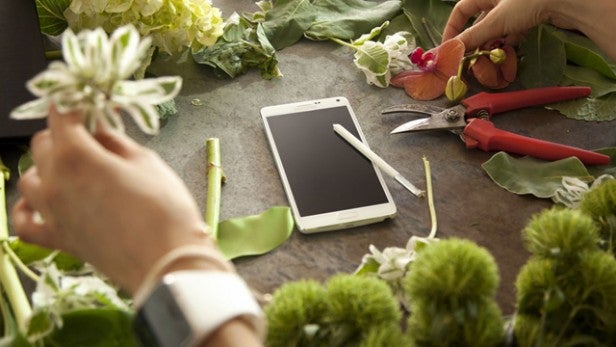 There are no surprises in the storage of either the Galaxy S5 or Note 4. The S5 has more varied storage options on offer, as it comes in models from 16GB to 64GB. The Galaxy Note 4 is only available with 32GB internally, but at least both have a microSD memory card slot.

Having the microSD card slot to hand means that demand for the higher-capacity versions just isn’t that high. Memory cards are just too cheap.

The Samsung Note 4 is a seriously powerful phone, and one that has a few clear technical benefits over the Galaxy S5: faster processor, and a larger, sharper screen.

We are a little disappointed that it doesn’t have one of Samsung’s ISOCELL camera sensors, and misses out on a 64-bit CPU, but until 2015 comes around it’ll be one of the most capable phones in the world.