With the Samsung Galaxy S4 set to be formally unveiling in New York City on March 14, the tech world has turned its attention to what the South Korean manufacturer will do with the eagerly awaited Samsung Galaxy S3 follow-on.

Widely expected be the next true rival to the likes of the iPhone 5 and the Google Nexus 4, the as yet unconfirmed Samsung Galaxy S4 has been tipped to play host to all manner of technical wizardry, with everything from flexible displays to eight-core processors having been at one point been mooted for inclusion.

Launching in the Big Apple, New York, the Samsung Galaxy S4 launch event, which you can follow with TrustedReviews, will kick off at 6pm PST (11pm GMT). Here is what we expect to see from the Samsung Galaxy S4, from its camera, design and CPU to its screen, price and release date. 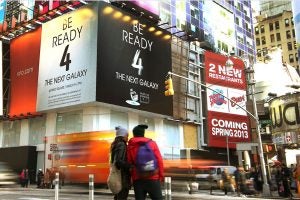 Expected to be packed with high-end market leading features, the Samsung Galaxy S4 will seemingly hit the realms of reality with an all new form factor. Although expected to come in for a change it is not believed the handset will stray too far from its S3 design aesthetics, maintaining a plastic construction while taking on a slightly more square-edged finish.

The Galaxy S3 launched in Marble White and Pebble Blue colour schemes, but we can’t see that being the case for the Samsung Galaxy S4. Having been caused considerable manufacturing issues with the blue hued device, Samsung has teased that the new handset will be made available in white and black finishes, erecting two billboards in New York City (one in white, one in black) stating simply “Get ready 4 the next Galaxy.”

Away from the hardware and on to a software front, the Samsung Galaxy S4 seems all but certain to play host to new ‘Smart Scroll’ and ‘Smart Pause’ features. Both leaked multiple times in prematurely outed screenshots, the inbound features will utilise the handset’s 2-megapixel forward-facing camera. Smart Scroll sees the handset automatically scroll through content dependant of where the user’s eyes are tracking. On top of this, Smart Pause will instinctively pause video content when it has detected a user has turned away from the screen.

Adding further insight into the new features, recent leaks showed that Smart Scroll will work across a selection of content, including the likes of ‘Chrome web pages’ and ‘the body of Gmail messages’.

What’s more, it has been revealed that the Smart Scroll setting options will allow users “Select the speed of scrolling in smart screen,” as well as being able to “select how fast scrolling accelerates in smart screen based on the angle of your face.”

Having teased the inbound features in a recent patent filing, Samsung described the software features as “computer application software having a feature of sensing eye movements and scrolling displays of mobile devices, namely mobile phones, smartphones and tablet computers according to eye movements.” 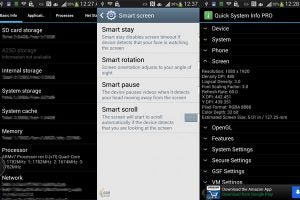 One of the most uncertain of all the Samsung Galaxy S4 specs, and a feature currently crowded in many conflicting reports, the Samsung Galaxy S4 processor has been rumoured to be either a quad-core offering or a CPU that would transform the device into the world’s first eight-core smartphone.

Despite reports earlier this week which cited unnamed “trusted sources” in claiming the device will be the first octa-core handset, recently leaked Samsung Galaxy S4 screenshots have pegged the device as hosting a more conservative 1.7GHz quad-core offering.

Making speculation around the handset’s CPU as clear as mud, further rumours have seen the handset pointing towards a 2GHz quad-core processor or a 1.8GHz eight-core chipset.

Having weighed up the bevy of conflicting options, we believe the Samsung Galaxy S4 will be an eight-core offering, helping distinguish the company’s new flagship model from the onslaught of high-end competitors such as the HTC One and Sony Xperia Z.

Although this eight-core CPU might not be wholly necessary, it is hard to believe Samsung would formally unveil the 1.8GHz Exynos 5 octa-core processor at CES 2013 earlier this year if it did not have plans to implement it within its leading handset lines. 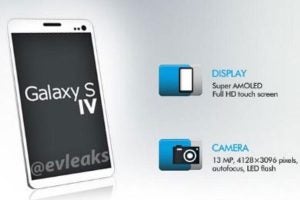 Again an area of slight uncertainty, it is believed that the Samsung Galaxy S4 screen will hover around the 5-inch mark with conflicting reports pointing at either a flat 5-inch or marginally smaller 4.99-inch option. One thing, however, is certain, the device is going to be a beast.

With past reports of a flexible display being on the cards widely rubbished, industry sources recently declared “flexible screens are still a while off.”

Even if the handset’s display does line up at 4.99 inches, we expect the Samsung Galaxy S4 to be touted as a 5-inch handset. What’s more, based on a selection of recent leaks, we can see the device featuring a Retina display-beating 440 pixels-per-inch image density and a multimedia appeasing 1080p Full HD resolution.

Although making a jump to a 5-inch display could be cause for concern for those with smaller hands or pockets, we can’t see the overall size of the device making too big a jump, instead, we believe Samsung will have dramatically reduced the handset’s bezel, improving on-screen real estate without adding unnecessary bulk.

Offering backing to these beliefs, a claimed “insider at Samsung” recently declared that the handset “will feature a bezel much thinner than on previous models,” a move that would be sure to appease many users.

Although it had been suggested Samsung would drop its AMOLED display technology for rival panels, we cannot see this happening with the multipurpose manufacturer having too much invested in its own screen tech.

Read on for details of the Samsung Galaxy S4 camera, release date, price and accessories>>