Samsung Galaxy S4 vs S4 Mini – which should you buy?

But does it really offer the same level of quality in a smaller body? Let’s take a closer look.

The Galaxy S4 Mini is, predictably, cheaper than the full-size S4. But by how much?

Given the spec compromises involved, which we’ll cover later, this makes the S4 seem like a bit of a bargain, and the S4 Mini over-priced.

That the S4 Mini is brand new does not help. The phone is expected to go on sale in July 2013, while the larger Galaxy S4 was released back in April – what a difference a few short months can make.

As its name suggests, the Galaxy S4 Mini is the spitting image of the Galaxy S4. It’s smaller and lighter, but its curves are almost identical.

However, the Mini is actually a bit chunkier than the S4 – by a full millimetre. This ensures that it doesn’t feel quite as slender as its big brother. 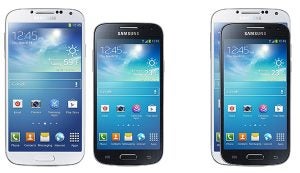 That smaller phones tend to be that bit chunkier makes sense, though, as they have to fit roughly the same internal components into a smaller area. The Galaxy S4 Mini only comes in black and white finishes, and has the same faux-metallic (i.e. plastic) finish as the full-size S4.

When the S4 launched, it came in two colours, white and blue. However, now you can get the phone in white, blue, black, red, brown and grey shades. Not all are widely available in the UK, though. 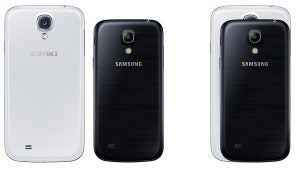 To go with the smaller body, the Galaxy S4 Mini has a smaller screen. It’s 4.3 inches across instead of a full five inches. Many people argue that 4.3 inches is a more sensible size because a body as large as the Galaxy S4’s is just too much for some people – saying that, Samsung’s clever design makes the S4 almost exactly the same width as the Galaxy S3.

The S4 also has a much more advanced screen than the S4 Mini. They use the same basic panel tech – Super AMOLED – but the resolution of the larger phone is much higher, both in plain numbers and relative to its screen inches.

The S4 Mini as 255 pixels in every inch of screen, the S4 has a mammoth 440. As a result, the full-size Galaxy S4 display is much, much sharper. 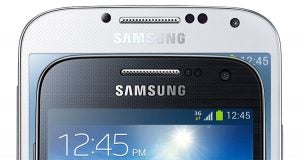 In an IPS-based LCD display, 256dpi would give a pretty sharp image, but as the S4 Mini uses a PenTile display (PenTile is a kind of sub-pixel arrangement) its images won’t be as sharp. In other words, the S4 Mini screen isn’t just a step down in size, it’s a step down in quality too.

Continuing the trend of being cut down in every sense, the Galaxy S4 Mini has 8GB of internal memory while the Galaxy S4 has 16GB. Samsung also produces 32GB and 64GB editions of the 5-inch phone, but they’re not widely available in the UK.

Both phones have a microSD memory card slot, which minimises the negative impact of this cut in storage. It doesn’t get rid of it altogether, though.

The issue is that most apps can only be installed to the internal memory, not memory cards. However, the 5GB or so that will be accessible in the S4 Mini will be more than enough for most people.

MicroSD memory cards are dirt cheap these days, and 32GB ones can be had for well under £20. It’s a great solution if you want to use your Galaxy phone as a music or media player, and these files can happily live on a memory card.

The processor of the Galaxy S4 Mini is a lot less powerful than the Galaxy S4’s – more proof that this really isn’t just a shrunk-down S4. It uses a Snapdragon 400 dual-core chip running at 1.7GHz.

The Samsung Galaxy S4 has a quad-core Snapdragon 600 chip running at 1.9GHz. Both are based on the Krait architecture.

There is a little less RAM in the S4 Mini too, although not a great deal. The 3G version uses 1.5GB of RAM, which is actually more than features in the Galaxy S3, while the S4 has a full 2GB.

It’s less powerful, sure, but the Galaxy Mini’s specs make it a mid-range mobile rather than a low-end one.

The interfaces of the Galaxy S4 and S4 Mini are almost identical, both based on a recent version of Android with the Samsung custom UI TouchWiz splattered on top.

TouchWiz is the interface Samsung has used in its phones for years. It has come a long way in those years, but its present focus is in adding reams of features you don’t get in Android, some of which are little more than filler fluff. 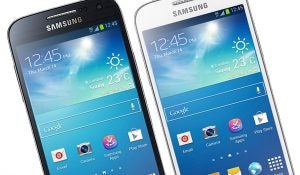 Extra features include an exercise tracker, language translator, a custom speech recognition app and more. Most feature in both phones, including WatchON, which uses the IR transmitter to let you control your TV (and other equipment) with the phone. This is missing in the Galaxy S3 because the phone does not have an IR transmitter – it’s a neat extra for a lower-cost phone like the Galaxy S4 Mini.

Both phones also have TouchWiz’s more annoying features – such as Smart Scroll, which lets you tilt the phone or nod your head to scroll through articles.

The Samsung Galaxy S4 Mini has a camera that’s roughly a generation behind the Galaxy S4, with an 8-megapixel sensor rather than a 13-megapixel one – seen in most top-end Android phones of 2013.

As this point, we do not know if the S4 Mini uses the same sensor as the Galaxy S3, which also has an 8-megapixel camera. If it does, there shouldn’t be a massive disparity between the image quality of these two phones. As we saw in our comparison of the iPhone 5 and S4, there’s not a huge gulf between good 8-megapixel and 13-megapixel phone cameras.

They are similarly constrained by the tiny size of sensors of this type. We’ll be back with a full look at the S4 Mini’s photo capabilities when we get the chance to take the phone out for a camera test drive.

Both phones also has high-quality front cameras – the S4’s uses a 2MP sensor, the S4 Mini’s a 1.9MP sensor.

For a closer look at what the S4 camera is capable of, check out our Galaxy S4 vs iPhone 5 comparison.

Like the S3 Mini before it, the Samsung Galaxy S4 Mini is not really a shrunken version of the S4. Its screen is not only smaller but worse too, its processor is slower, it has less storage and a weaker camera. However, in each field it packs enough of a punch to offer a solid mid-range Android experience. If you want everything the S4 has but in a smaller body, however, this isn’t it.