The Galaxy series has taken over Android in many people’s eyes. But there’s more to the series than just the Galaxy S flagships.

The Galaxy Note 2 is one of the most interesting Android phones out there thanks to its clever stylus, but how does it compare to the Galaxy S4? Let’s find out.

The Note 2 and Galaxy S4 use the staple Galaxy-series design template. That means a removable plastic rear that flexes a good deal when taken off the back. It’s super-thin.

This style has earned the phones a lot of criticism, but drop tests show that it’s not a bad kind of construction – the plastic soaks up impact much better than metal, which tends to transfer more of the force to the highly-smashable screen. 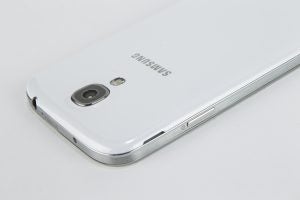 Gorilla Glass is great at avoiding scratches from things like keys and coins, largely removing the need for a screen protector unless you really want to keep your phone pristine in order to sell it on down the line.

There are also clear advancements in its body shape. The Note 2 is significantly chunkier than the S4, a full 1.5mm thicker. It’s also a whopping 55g heavier. 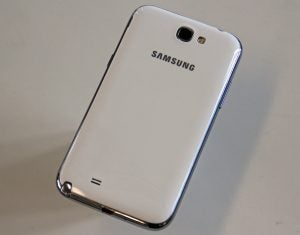 Some of this is down to Samsung getting to grips with how to make its phones slimmer, but there’s also the stylus to consider. The Note 2 has a cubby hole to store its digitiser stylus down the bottom – and this is the top reason why the Note 2 isn’t super-slim.

The Galaxy S4 has double the number of pixels, an eye-opening 2,000,000-plus against the Note 2’s 900,000-odd. However, the Note 2 remains pretty sharp because, unlike the Galaxy S4, it doesn’t use a PenTile array display.

OLED screens like those of the Galaxy series of phones often use a PenTile array, which is an uneven sub-pixel arrangement that reduces sharpness. It was pretty noticeable in the Galaxy S3, but in the S4 the 1080p brings high enough pixel density for the problem to fade. As it doesn’t use a PenTile display, the Note 2’s 267ppi display looks fairly sharp too.

Let’s not overstate things, though – the Galaxy S4 is still in another class. Contrast and top brightness are superior. The Galaxy S4 has a truly zingy, impressive screen. 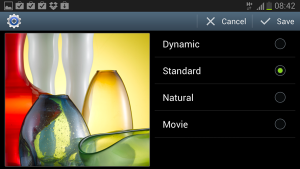 Both phones also give you some customisation of the screen’s settings. Super AMOLED displays tend to oversaturate colours, but both phones have a menu that lets you set the screen to ‘neutral’ colouring for a cooler, more relaxed look.

The Galaxy Note 2‘s key selling point is its digitiser. This is a special screen layer that lets the phone interact with a special stylus that slots into the phone’s bottom edge.

The digitiser is made by Wacom, which produces ‘industry standard’ graphics tablets like the Wacom Intuos 5. It allows for 1,024 pressure sensitivity levels – enabling some pretty convincing drawing apps. The stylus rib is made of rubbery material, which gives a pretty natural-feeling response on the display’s glass too. 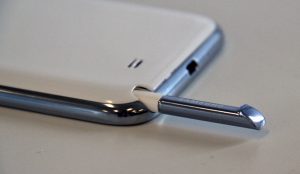 Some people think the stylus is a bit of a gimmick, but in use it’s great – and the preinstalled S-Note is a great stylus-optimised app that lets you takes notes, make presentations and all sorts.

The Samsung Galaxy S4 does not have a digitiser layer. You can use a stylus, but it’ll have to be the standard capacitive kind, which simply responds in the same manner as your finger. There’s no pressure sensitivity, and no sensing of the stylus when it’s hovering above the screen.

There is another bit of tech that impersonates this, though. AirView makes the phone respond to your finger when it hovers above the screen, using super-cranked screen sensitivity.

The two phones use Samsung’s long-standing TouchWiz interface, laid on top of the Android operating system. The Galaxy S4 is a generation ahead of the Note 2, and it has several extra bits of functionality.

One of the most significant – and one that can’t simply be added with an update – is IR blaster functionality. This lets you control your TV with the Galaxy S4, using the WatchOn app. AirView is another feature that may come to the Note 2. For more on these, read our round-up of the best new TouchWiz features. 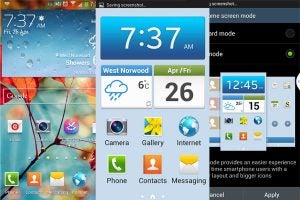 Other features, such as Smart Scroll, S Translator and Smart Pause, are likely to come to the Note 2 with a software update.

The two versions of TouchWiz look more-or-less identical too – the Samsung Android style has remained fairly consistent over the last few years.

Software features that the Note 2 can brag about relate to its stylus. The Note 2 lets you scrawl over the screen wherever you are and save your notes as images for retrieval later on – and the S-Note drawing/note-taking app has been thoroughly optimised for the pen. 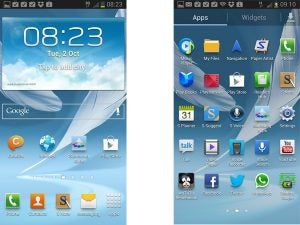 At present, the Galaxy S4 uses a slightly more up-to-date version of the Android OS, with 4.2 Jelly Bean rather than 4.1.2 Jelly Bean. It’s not a huge difference.

The Galaxy Note 2 was one of the first phones to ship with 2GB of RAM, setting the standard for this year’s 2GB RAM phones, including the Galaxy S4.

The CPU is another matter, however. Both phones use quad-core CPUs, but there’s a generation gap between the processors.

The Galaxy S4 has a Snapdragon 600 chipset clocked at 1.9GHz. It doesn’t sound like a huge difference, but the two have completely different architecture types. The Snapdragon 600 uses a 28nm process, while the Note 2’s Exynos 4412 is stuck with ‘old’ 32nm. Increased miniaturisation means higher efficiency, more power.

AnTuTu benchmark tests tell the story in an empirical way. The Note 2 scores around 18,000 points, the Galaxy S4 around 25,000.

The difference between the two isn’t massive, but the Adreno is a little more powerful.

As the phones both have 2GB of RAM, the difference in performance is not huge, but the Galaxy S4 is clearly the more powerful phone.

It’s not quite as big an upgrade as it may sound, though, as the size of the sensor hasn’t really increased. Samsung has simply crammed more sensor pixels into the same space. 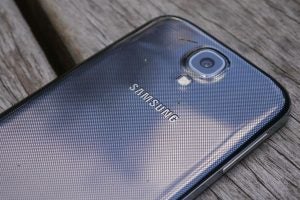 The higher resolution of the Galaxy S4 makes shots taken in good lighting more detailed than those of the Note 2.

Both cameras are a delight to use, though, with good macro skills and quick focusing.

The Galaxy S4 is more advanced in other respects too. It has an f/2.2 lens while the Note 2 uses a slower f/2.6 lens. A slower lens means the camera needs to use longer exposure times, and reduces the depth of field effects a camera can produce. This is where the background appears out of focus, while the foreground is pin-sharp.

In most respects, the Samsung Galaxy S4 is clearly a generation ahead of the Note 2. A faster processor, more advanced screen, better camera and newer software age the Note. However, none of the new features are total deal-breakers, and the digitiser of the Note 2 is still a huge draw.