The Samsung Galaxy S4 is here and it comes, as Samsung’s head of Mobile Communications JK Shin put it, with “So many features that were inspired by the people of the world.”

Some of these new features are undoubtedly impressive and one or two could prove great enough to persuade even a die-hard iOS fan to switch. Other, though, feel less crucial. Its not that they aren’t innovative, but rather that they seem a bit unnecessary.  Is Samsung just adding new features for their own sake?

Piling it On
This may seem like a silly, even churlish thing to say about the launch of a new phone. Shouldn’t we just be pleased that our new toy comes packed with cool new tricks and abilities? Isn’t more always better?

The fact is, every feature added to a phone comes at a price – either literally or the opportunity cost of choosing one feature over another. The rather elaborate Broadway production at Samsung’s launch event for the Galaxy S4 was designed to show us how useful these features are but there is no guarantee that all of them will prove to be so outside the confines of a product demo.

Smart Scroll? Smart Fail
Take the much-rumoured eye-tracking features – Smart Pause and Smart Scroll. The latter turned out to be somewhat less impressive than we were led to believe. Essentially, rather than letting your scroll the screen by tracking where you are staring on the page, the phone simply detects that you are looking and then lets you scroll by tilting the phone up or down. Early reports imply this works rather better on paper than in practice.

Smart Pause on the other hand appears to work exactly as advertised. The Galaxy S4’s eye-tracking again detects when you are looking at the screen while watching a video and will then pause the action the moment you look away.

This works fine, but is it a feature you would actually want? Quite often when watching a movie or TV show on my phone I look away for a moment if what is happening on screen is less than compelling. Smart Pause removes the ability to dip in and out of viewing and instead turns watching a video into something that you MUST DO AT ALL TIMES. Imagine if you couldn’t look away during the adverts on your TV without pausing them. Now imagine shouting  “You’re not the boss of me!!” at your phone and the other passengers on the train staring at you, piteously.

Rotten to the Core
One of the headline features of the S4 even before it launched was its Octa-core processor. Adding extra cores should make the phone perform extremely well but one has to ask just what we are meant to need all that processing power for. Games seem like the obvious answer, but until there are more phones on the market that are similarly equipped, it simply is not worth it for developers write games targetted at such high specs. This is not to even mention the numerous articles suggesting that current versions of Android can’t really do much with more than a couple of cores anyway. 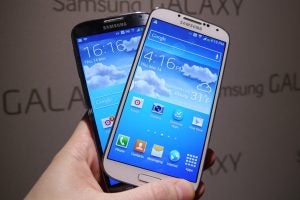 Several of the new features seem particularly processor intensive – almost as though they have just been included as something for the 8-core CPU to do.  If there was no compelling need for these apps then why couldn’t Samsung have focused on less showy features that consumers do want? Battery life is still cripplingly short on most smart phones and an Octa-core processor twinned with a tri-core GPU and that enormous screen is going to eat into your charge like a toddler in a sweet shop.

It was telling that although the very first feature mentioned in the main Galaxy S4 presentation was the 2,600mah battery, at no point did we hear how long that battery was meant to last. That the presenter then enthused about the fact that the battery was removable (and thus swappable for a second, pre-charged spare) does not exactly inspire confidence that Samsung has cracked that particular nut.

If Samsung had decided to use a less powerful processor in the Galaxy S4 – and been forced to leave out flashy, marginally-useful features like Smart Pause – could we have traded that speed for a few hours longer between charges?

When Features Become Gimmicks
Some of the S4’s features seem particularly out of place – almost as though they are intended for an entirely different device. Gesture controls, eye tracking and the physical monitoring of the S-Band all seem like ideas that are being tried out in public with an eye to fleshing out a future wearable computing project.

This wearable device might feature a heads-up display that uses a combination of eye tracking and subtle gestures to operate its UI. It could monitor your heart rate and log the calorie count of food it spots passing in front of your face. It probably won’t be a phone.

There is one final danger with Samsung’s feature-packed approach (and it is not just Samsung – this applies to all the major Android phone vendors.) Every new feature that they build into the OS of your Android-derived phone takes it slightly further away from stock Android. Conventional industry wisdom is that consumers don’t care about the ‘purity’ of the Android OS and this is broadly correct.

However, the Android ecosystem is very important to them, whether they realise it or not, because ultimately what they love about smartphones is the apps. If Android is weakened and Samsung (or whoever) is able to pull away, then it remains to be seen if developers will follow in the numbers required to keep the all-important apps flowing.

Samsung is locked in a head-to-head fight with Apple for smartphone dominance. Both companies are trying to cram in as many new and innovative features as possible in order to tip the balance and convince users to switch – but that approach may not be sustainable. Rather than simply trying to jam as many tech buzzwords together as possible and turn the resulting madlibs into product features, Samsung and its competitors might do better to focus on simply making the better phones that customers actually want.