Big screen phones are here to stay. Two of the most interesting we’ve seen yet are the Samsung Galaxy Note 3 and the Nokia Lumia 1520.

The Note 3 uses a clever stylus to make the most of those screen inches while the Lumia 1520 is the first Full HD Windows Phone mobile we’ve ever seen. But which is the better phone?

But it is not a revelation. It’s grippier than the old Samsung style, but still doesn’t feel super high-end.

The Nokia Lumia 1520 is quite different. It’s a unibody phone that uses the colourful polycarbonate material seen across the Lumia range.

Polycarbonate is little more than a fancy word for plastic, but the plastic Nokia uses in its high-end phones is most impressive. The Lumia 1520 feels and looks great. However, you don’t get access to the battery.

The Lumia is also slightly thicker than the Note 3 – at 8.7mm to the Note’s 8.3mm. However, it’s not a huge gulf and both mobiles are skinny enough to feel like ‘thin’ phones.

At present, the Galaxy Note 3 comes in white, black and pink while the Nokia Lumia will be available in the Lumia series standards of white, black, yellow and red. 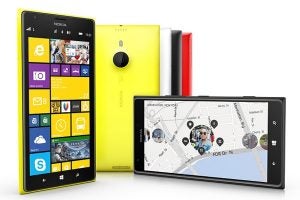 The original Note was one of the original ‘giant screen’ phones, but in its third generation it looks quite small against some of the competition. Where phones today stretch to 6.4 inches, the Note 3 is just 5.7 inches across. It’s huge, but it still feels like a phone.

Nokia’s Lumia 1520 is a bit bigger at six inches, and does push/break the boundaries of what is acceptable for some people.

We recommend getting your hands around the phones before buying, especially the Lumia 1520. The Nokia is 85.4mm wide, 6mm wider than the Note 3 and 20mm wider than an iPhone 5S. That makes a huge difference to how the phone feels to use.

Looking a little closer at the displays, the Note 3 and Lumia 1520 use completely different display technologies, but offer similar – and pretty excellent – results.

The Galaxy Note 3 has a Super AMOLED screen, the Lumia 1520 an IPS LCD screen. The big difference between the two is that while the Nokia uses a universal backlight, the Samsung does not.

In lesser IPS screens there’s a noticeable difference in contrast and black level between the screen types (Super AMOLED being superior), but here the difference is not clearly evident unless you’re in a completely dark room. It’s all thanks to the ClearBlack screen ‘technology’ the Lumia 1520 uses.

All ClearBlack is really is Nokia’s branding for its attempts to reduce screen reflections, increase contrast and improve outdoors visibility all-round. But it is a pretty reliable seal of quality.

Sharpness, colour reproduction, brightness and clarity are great in both screens. The Note 3’s colours are a little hot as standard, but you can easily customise this in the Settings menu.

The most important feature of the Galaxy Note 3 is its S Pen stylus. It’s a digitiser stylus that’s much smarter than the capacitive styluses you can use with a Lumia 1520.

There’s a separate digitiser layer in the Note 3’s screen that senses the S Pen stylus and can tell how hard you’re pressing it on the screen. It’s the same technology used in high-end graphics tablets like the Wacom Intuos 5.

Apps that make use of the stylus’s pressure sensitivity are included with the Note 3 too – most notably SketchBook Pro.

There’s no inbuilt pressure sensitivity in the Lumia 1520, and it doesn’t come with any stylus at all – you’ll have to buy your own capacitive stylus separately. Just as important, there’s nowhere to stash any stylus you do buy within the phone’s body. The Note 3 has a little hole in which the S Pen lives (seen top-left in the pic below). 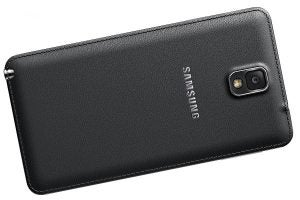 These phones use the same processor type – a quad-core Qualcomm Snapdragon 800 chip clocked at 2.2GHz – and that means they also have the same Adreno 330 graphical processor.

The Snapdragon 800 CPU is one of the most powerful mobile processors currently available, roughly on-par with Nvidia’s Tegra 4. Looking deeper, it uses four Krait 400 cores, based on the ARMv7 architecture.

Everyone loves hardware, but in the comparison of the Note 3 and Lumia 1520, we can’t forget software. The Samsung phone runs Android 4.3, the Lumia 1520 Windows Phone.

The Note has many more inbuilt features, not least because of the extras Samsung has crammed into the phone with its TouchWiz interface.

Check out all the latest Samsung Galaxy software features

Windows Phone is still a bit slicker and smoother than Android, and thanks to the sheer number of extra bits and bobs on the Note 3, the Lumia 1520 is a bit easier to use.

However, if apps and games are your thing, the Note 3 is a far better choice. The selection is much better with a Note 3.

It’s closer to the quality of the Sony Xperia Z1 than the Lumia 1020, but that doesn’t mean it’s not a cracking camera.

The Lumia 1520’s flash is also superior to that of the Galaxy, with a dual-LED model rather than a single-LED one.

Big phones need big batteries, and both the Galaxy Note 3 and Lumia 1520 have very large units. The Lumia’s is 3400mAh, the Note 3’s only slightly smaller at 3,200mAh.

Although a technical victory for the Note 3, real-world use is much more important. We’re yet to see how Windows Phone manages power with a 1080p resolution phone (this is the first one we’ve seen) and the Note 3 aleady has pretty strong battery life.

However, these are two of the biggest batteries available in a smartphone, so stamina should not prove a problem in either case. Two days’ use off a charge should be a stretch, but do-able.

These phones are interesting in their own ways. The Nokia Lumia 1520 is a genuine ‘first’ and the Note 3 is quite unlike any of its peers. Abstracted from any market context, the Note 3 is the more interesting phone, offering loads more functionality and flexibility. However, if camera quality is a top concern, the Nokia is the winner.

Next, read our Note 3 vs Galaxy S4 comparison