One of this year’s most anticipated Android gadgets is the Samsugn Galaxy Note 2. The original was a surprise hit – it was massive and quite geeky, but has found quite a following. It has already sold between seven and 10 million units, and is still very much a current device. More sales on the way…

But the Galaxy Note 2 is on the horizon, and set to be unveiled later this month at the IFA press conference. We’ll be there with all the official details as they’re released, but if you can’t wait, here’s how the two compare.

Please note: this article is based on rumours and unconfirmed reports. We’ll update it with the official rock-solid info as soon as possible.

We don’t expect that a great deal will change design-wise in the second Note phone-tablet. The whole idea rules-out too much of a design shift. The thing is – necessarily – about 90 per cent screen and any change in the materials used, plastic aside from the glass front in this case, would have too much of an effect on weight. 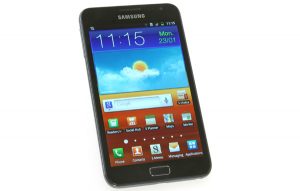 A few little tweaks we’d bet on are that the main “select” soft key will use a slightly different shape – something close to the Samsung Galaxy S3 – or could even disappear altogether.

There haven’t been any rumours about how weighty the Note 2 will be as yet. However, the first Note was a fairly light 178g, and the next one is unlikely to stray above this. And even though it has a slightly larger screen, this will be sucked-up by the previous bezel area, for the most part – it’s unlikely to be much larger as a whole.

The giant screen and stylus ability have always been the main attractions of the Note, earning it the awkward and kinda cringy title of “Phablet”. Samsung’s second go will offer evolutionary – but pretty impressive – display upgrades.

The most immediately obvious will be the 0.2in increase in size. Why bother with such a teeny enlargement? We’d bet that the screen will simply bleed into the small amount of bezel of the first Note, giving an even greater impression of being “all screen”.

Two other rumours persist too – that the resolution will be higher and that it’ll use new panel technology. The resolution quoted is 1,680 x 1,050, over the original Note’s 1,280 x 800. However, we’re having a little bit of trouble believing it. 1,280 x 800 pixels is already a great resolution for a 5.5in device, and the higher spec would bump it up to 360dpi pixel density. That’s a 100 more than the new iPad, and 45 more than the upcoming iPhone 5.

It would no doubt look pretty incredible with the Super AMOLED panel providing excellent contrast to boot. But we just don’t buy it. We could easily be proved wrong, though…

Next up for dissection is the idea that the Samsung Galaxy Note 2 will feature flexible panel tech. So… the Note 2 is going to be bendy? Not quite. The UBP (Unbreakable plane) panel reduces thickness by 0.4mm, potentially letting Samsung make the phone thinner, or reduce the ill effects of a larger battery.

The S Pen is the Note’s stylus. What makes it far more useful than a basic stylus for a capacitive screen is that the Note has a digitiser layer, as seen in graphics tablets. It’s made by Wacom too, the star player in the field.

Samsung’s original S Pen and the Note’s digitser layer offer 100 levels of pressure sensitivity – much less than the graphics tablet standard of 2,048, but not bad. What’s more of an issue is that hardly any Android apps support pressure sensitivity – it needs to work on the software side as well as the hardware side. 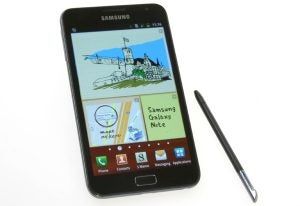 There’s also the issue of the screen surface. Dedicated stylus surfaces use a textured finish to emulate the feel of paper, but Gorilla Glass feels a bit too hard for an entirely natural writing experience. Next to anything else in its field, though, the S Pen comes out smelling of roses. For casual note-taking it really is quite excellent.

Will the S Pen change much in the second version of the Note? We expect that the basic technology making the whole shebang work will remain the same, but a patent document suggests that a new version of the S Pen may double as a wireless headset, jamming-in a microphone. Pressure sensitivity will also reportedly increase to 256 levels.

The actual patent application details a capacitive stylus – therefore one that can be used with virtually any phone rather than just a Note – but having a mic attached makes sense in some scenarios. We’ll leave off calling someone with the thing, thanks, but what about getting a voice recoding during a lecture, while you’re making your own written notes? Yes please.

RAM will also be upgraded from 1GB to 1.5GB, and some rumours suggest the upgrade will bump the phone-tablet all the way up to 2GB. Either way, you can expect the Note 2 to run like a demon. At least once it gets the update, anyway…