Two tech heavyweights have just launched high-profile smartwatches, the Samsung Galaxy Gear and the Sony SmartWatch 2. But which is the better of the two?

One of the traditional problems with smartwatches was that they looked like blocky monsters, as if you’d strapped a retro 80s gadget to your wrist in hipster-esque fashion. The Sony SmartWatch 2 still has a whiff of this look.

We wouldn’t be surprised if the retro look is deliberate, but the blocky appearance of the ‘brain’ of the SmartWatch 2 is likely to put some people off. The Samsung Galaxy Gear has gone for a look that’s smoother, with more continuous lines than previous smartwatches.

With the screen set to display a clock and nothing more, you could almost believe it’s just a new-fangled digital watch from Japan. The Gear also offers more customisation, with six strap colours and ten virtual clock faces. With the SmartWatch 2, you only really get to choose the colour of your rubbery watch strap. 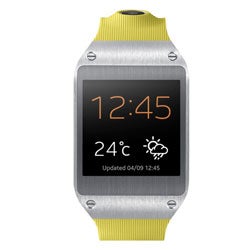 The Samsung Galaxy Gear screen is a tiny bit bigger than the SmartWatch 2’s. It’s 1.63 inches across, next to the Sony’s 1.6-inch display. Both are pretty small.

However, there’s a big disparity in screen quality. The Sony SmartWatch 2 uses a fairly unremarkable 176 x 220 pixel LCD display, where the Galaxy Gear has a rather good 320 x 320 pixel Super AMOLED screen. It’s far sharper, and its screen type offers better sharpness and clarity than the Sony SmartWatch 2.

Both of these watches offer a bit of weather resistance. Sony says the SmartWatch 2 is water resistant, but shouldn’t be worn in the bath, or even the shower. So basically it rains you’ll be ok, but with anything remotely monsoon-like you’re looking at a dead digiwatch.

The Samsung Galaxy Gear is – once again – the more impressive of the two. It’s certified to the IP67 standard, meaning that it can be submerged in shallow water for up to 30 minutes. Take it in the shower? Why not? You could even risk taking it swimming, but we wouldn’t advise it.

Other than its higher-quality screen, the Galaxy Gear is the more expensive of the two watches because it packs in way, way more features. The SmartWatch 2 has NFC and Bluetooth to connect to a phone, and little else.

You need a Bluetooth headset to make calls with the thing and it doesn’t have an internal speaker. The SmartWatch 2 is really for relaying messages from your phone, and controlling things like music, and little else.

The Samsung Galaxy Gear is a different proposition altogether. In true Samsung fashion, it tries to do just about everything. It has a 1.9-megapixel camera, it has a gyroscope, it has an accelerometer. It has a speaker, and two microphones. This means you can take calls with it, monitor you movements with it, take photos and even video.

There is no competition here. The Galaxy Gear can do much, much more than the Sony. And while both have apps made for both watches, Samsung was keen to big-up that loads more apps are coming too. It’ll have 70 for launch, apparently.

As it has to do many more demanding things, it’s no surprise that the Galaxy Gear has more powerful specs than the Sony SmartWatch 2. Both sound pretty weak by smartphone standards, though.

The Galaxy Gear has a single-core 800MHz processor, the SmartWatch 2 a piddly 200Mhz chip. The Gear also has 512MB of Ram and 4GB of internal storage. We don’t know how much RAM the Sony smartwatch has – probably not much. 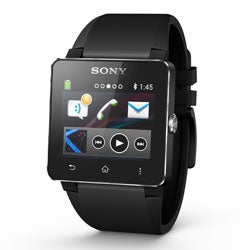 Both these phones use Bluetooth and NFC as their primary means of connecting with a phone. The NFC makes the connection and the Bluetooth actually transfers the data once the two are paired-up.

The Galaxy Gear has a slightly more advanced version of Bluetooth, version 4.0 where the SmartWatch uses 3.0. This makes the Gear compatible with Bluetooth Smart devices – designed for low power use.

However, the other connections you’d expect to find in a phone are absent. There’s no GPS, no Wi-Fi, no 3G. It’s all pretty basic.

GPS would have been a great addition to the Samsung Galaxy Gear, enabling it to function as a standalone sports watch. As-is, it can’t map your runs accurately without piggy-backing off a phone’s GPS, assuming it can even do that.

An IR transmitter would have been useful too, letting you control your TV with your watch. Gimmicky? Sure, but we are talking about smartwatches after all.

One clear win (finally) for the Sony SmartWatch 2 is price. It’s available for just £130 in the UK – you can pre-order it from a number of places online already.

The Galaxy Gear is much more expensive. It’s set to sell for $300 in the US, suggesting we’ll have to pay around £280-300 in the UK. That’s a whole lotta cash for a watch – on par with the rather special Garmin Forerunner 910XT GPS watch.

It makes us wonder – who on earth is going to buy a Galaxy Gear? It may be a lot better than the Sony in many respects, but the pricing makes the Sony SmartWatch 2 a far less daunting prospect.

The Sony SmartWatch 2 is also far less demanding product in terms of the things it’ll work with. Right now the Galaxy Gear only work with the Note 3, with support for other Galaxy devices like the Galaxy S4, Galaxy S3 and Galaxy Note 2 coming later in the year.

The SmartWatch 2 will work with any device running Android 4.0 or newer – that’s a whole shedload of phones and tablets. This is the main merit of producing a simpler, less feature-packed device. It doesn’t need a very specific phone on the other end to play with.

From a tech purist’s point of view, the Samsung Galaxy Gear is the much better smartwatch. It does more, it looks a bit better and it’s far more ambitious. However, we’re not convinced Samsung’s usual ‘more is better’ approach works here.

Perhaps we’ve be bowled over when we get to live with one for a while, but – stepping  back for a while – the SmartWatch 2 might actually be the more sensible smartwatch.

Which would you prefer, if any? Let us know in the comments.