Colourful lighting (RGB) on gaming PC components is big business, but is the latest extension onto your desk via £70 mousemats a step too far? Peripherals reviewer Marcus Cole explores this latest trend.

We’ve come a long way from the beige computer towers of old, but there are times we should perhaps question whether things have gone too far. So far, 2017 has very much been the year of RGB lighting, with seemingly every new piece of gaming hardware flying the RGB flag.

But there’s one controversial piece of tri-coloured equipment that’s causing quite a stir. Can RGB mousemats possibly be worth their large price tag? On the whole, a RGB mousemat is the same mouse gliding surface that you’ve probably been using for years – but with two significant differences. The first, as you may have guessed, is the colourful array of RGB lights surrounding the central pad. This is mainly a visual affair, but some actually integrate with games, allowing for reactive lighting for events such as cool-down timers.

The second is much less glamorous: all RGB pads will require a USB connection for power, resulting in yet another ugly cable trailing across your desk. Lovely. 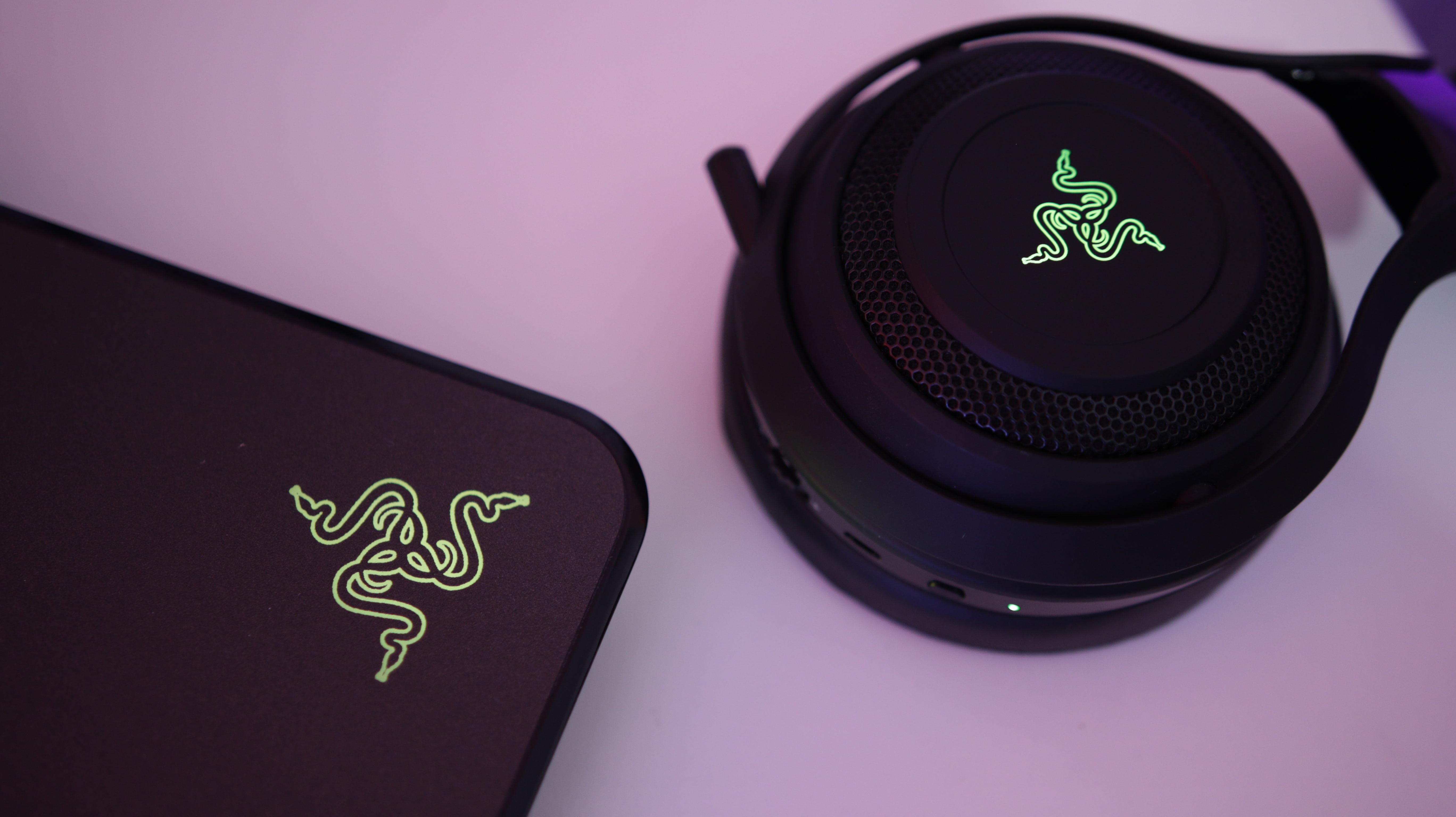 The Razer Firefly alongside the Man O’War headset

The oldest player in the game is Razer, with the Firefly. This charming mat is the smallest of the three I’ve seen. The RGB lights are located under each edge of the mat, resulting in an underglow neon effect (think Need For Speed: Underground 2). A large Razer logo sits on pad itself, which is illuminated with a soft coloured glow. The Firefly is available from £64.99, and comes in both soft cloth and hard matte plastic surfaces. 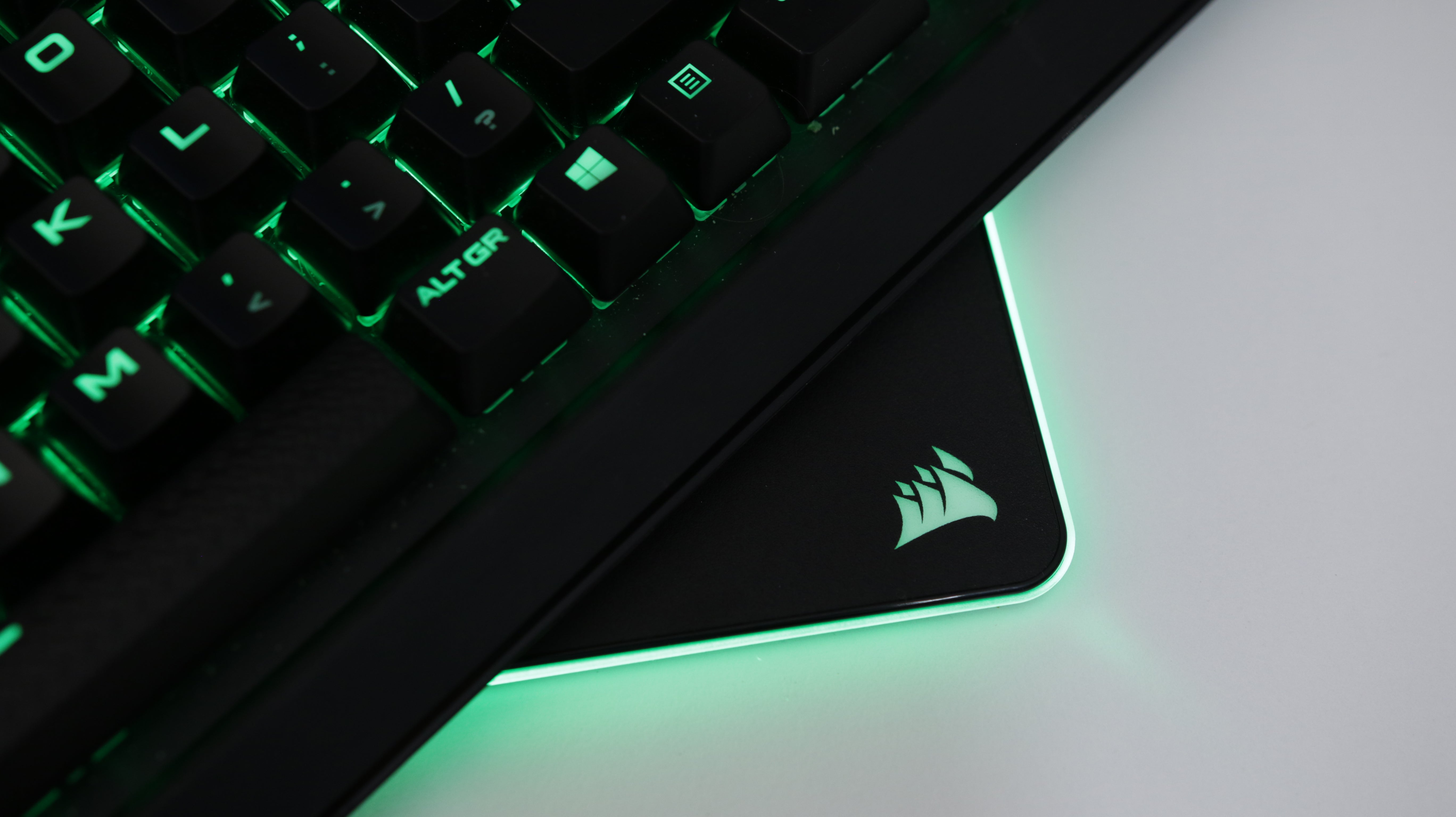 Corsair threw its RGB hat [editor’s note: wouldn’t an RGB hat be amazing?] into the ring late last year with the Polaris MM800. Costing £59.99, the Polaris takes a similar approach to Razer, with edge lighting that’s split into separate RGB zones. There’s less of a lip on the Polaris mat, though, so the overall effect is more pronounced. Helpfully, Corsair has also included a USB port for passthrough on the top of the pad, although this elevates the tip of mat, causing it to occasionally catch the cord of a wired mouse. Like the Firefly, the Polaris comes in both cloth and plastic flavours – although, at the time of writing, the cloth pad is US only. 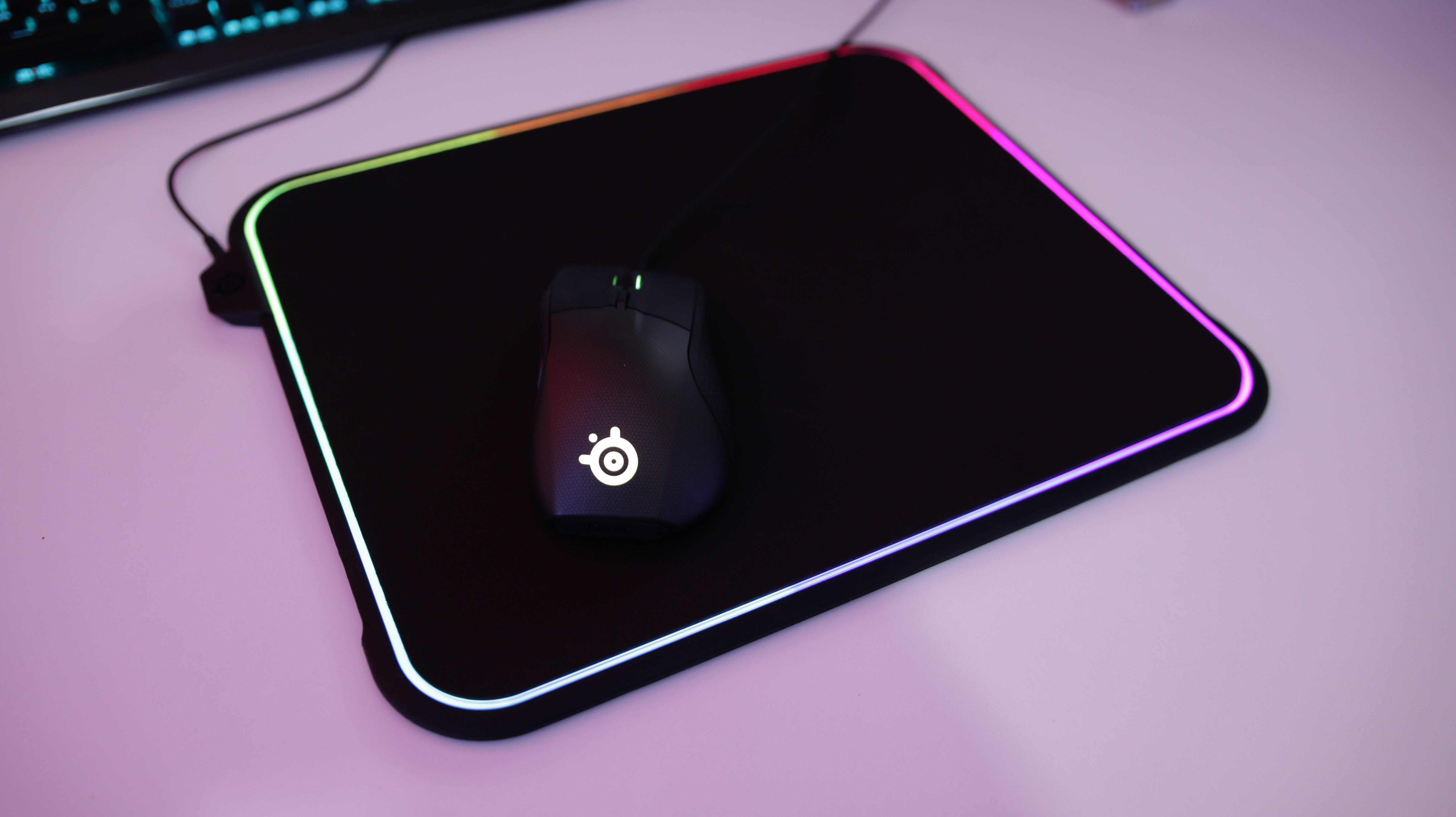 Finally, we have the SteelSeries QcK Prism, with an RRP of £69.99. It’s the most recent pad in the group, and offers a slightly different design. For starters, the Prism is reversible, with both cloth and plastic surfaces available – handy if you’re undecided on which to go for. There isn’t a USB passthrough, but the cord is connected on the top-right corner of the pad, which eliminates the risk of any cord-catching. The RGB ring sits on the top of the pad, as opposed to the edges of the mat in rival models. The overall look is rather different to the others, which I’m sure some will appreciate. Personally, I prefer the aesthetics of the Firefly and Polaris.

As you’d expect for such an expensive mousemat, the tracking is excellent on each of the pads – but let’s be clear: the surface material can be found on mousemats costing half the price, plus there isn’t any tactical advantage to be gained from additional investment.

Remember, the hard surfaces are much better for longevity; plastic surfaces will resist marks and stains. Mice travel much faster over the micro-textured material too, so if you’re a gamer that values speed then the hard surface is for you. 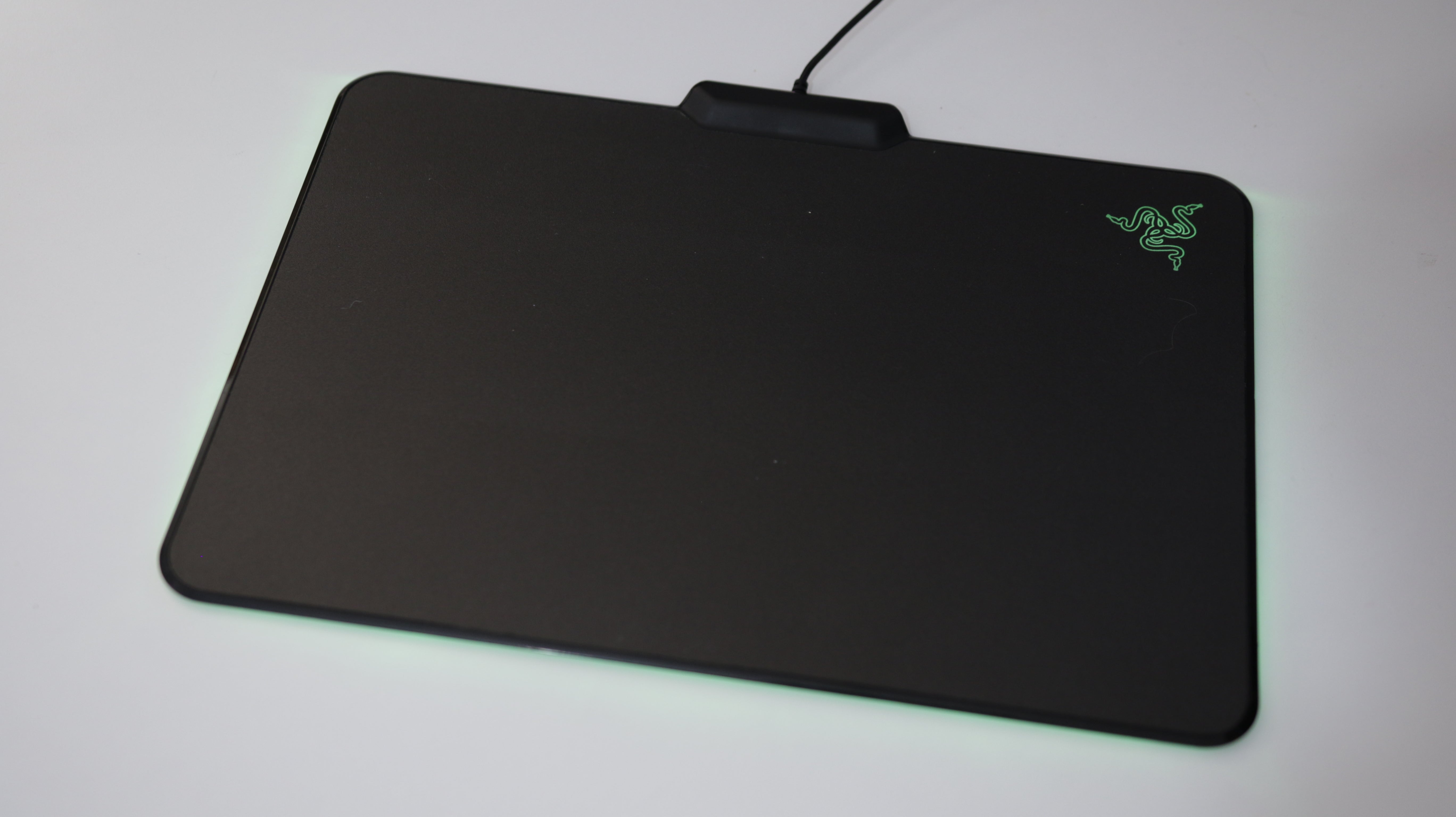 The Razer Firefly is much more subtle

The cloth surface, on the other hand, allows for greater precision – and it’s my surface of choice, despite the more limited lifespan of soft fabric.

The RGB lighting is of course the star of the show here, and sure enough, each pad will transform your desk into something a little bit more colourful. The Corsair Polaris is the brightest on test, with 15 zones of vivid colour blasting out from every corner of the pad. I find it doubtful that you’d complain about the lighting on any of these models, since each looks great in its own right, with minor details dividing the bunch. 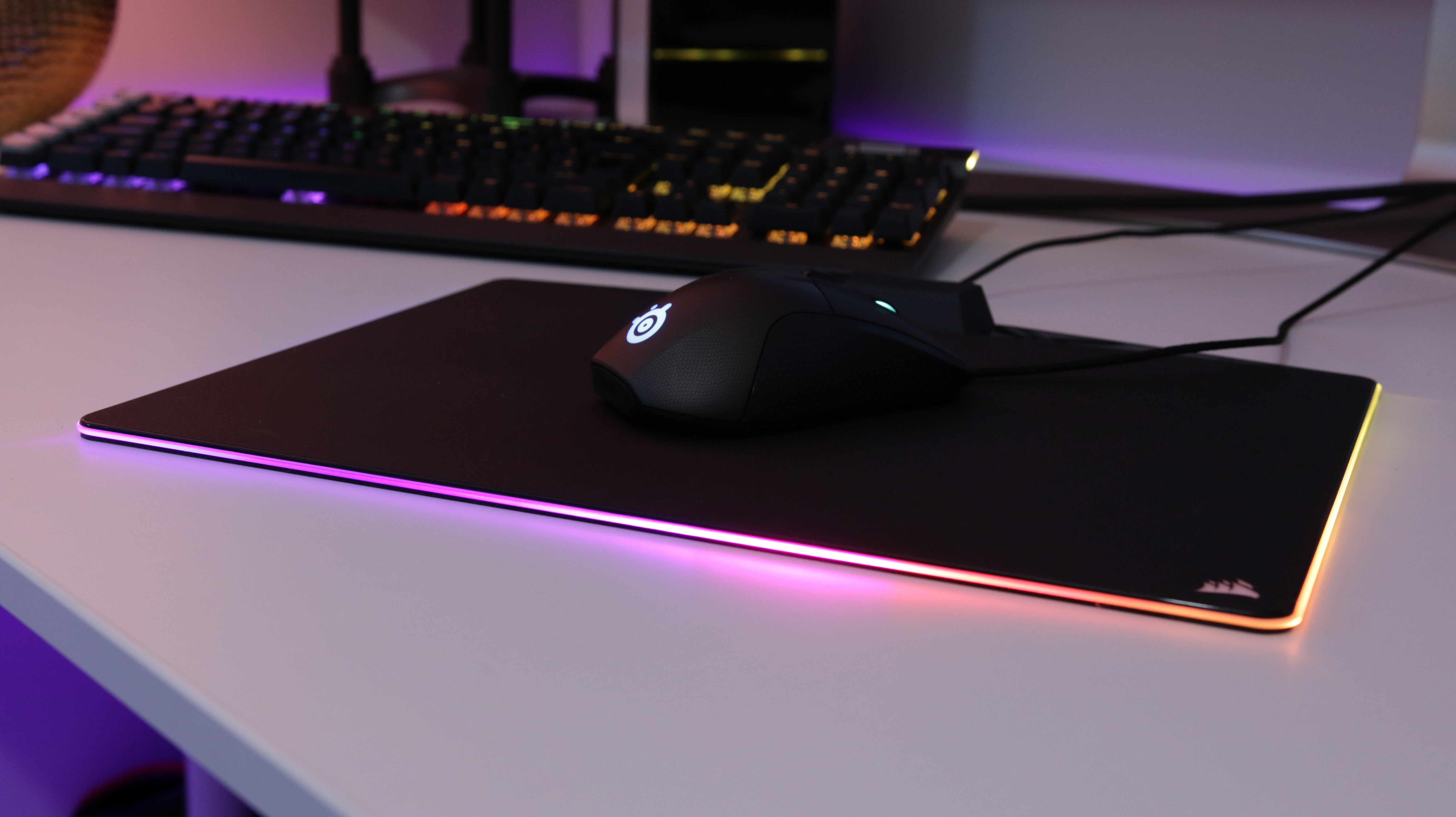 Lighting control is achieved with bespoke software, with Corsair’s CUE, Razer’s Synapse and SteelSeries’ Engine. You can choose from an array of options, including rainbow spiralling, colour fading and light chasing. If you’ve already invested in the brand ecosystem, you can also connect other peripherals in the range to neatly interact together. It should be noted that Corsair and Razer currently have a greater number of RGB peripherals available.

Are they worth it?

As someone who has an office filled with coloured lights, glowing motherboards and flashing keyboards, it should come as no surprise that I’m guilty of being taken by RGB fever. Having said that, I’m also someone who likes a tidy desk, and while I don’t always succeed, I try to keep my area as clutter-free as possible. As such, the addition of another cabled device isn’t necessarily a great idea, especially at a cost of more than £50. Instead, you could invest in some smart lights or grab a set of LED strips to arguably achieve a stronger overall effect.

Nevertheless, these are well-made pieces of kit; they have one function, and they do it very well. If you’re prepared to spend the money, and don’t mind the extra cable, you’re in for a RGB flavoured treat.