Which of Speccy’s second comings is the better Spectrum?

After waiting 30 years for a decent revival of the classic Sinclair ZX Spectrum, 2015 has delivered not one but two different machines produced by totally separate companies. These things are truly like buses, it would seem.

In the red corner we have the Recreated ZX Spectrum, a full-sized reproduction of the seminal ’80s home micro, faithfully cloned right down to the full QWERTY keyboard. It’s produced by Elite, a publisher and developer whose history goes back to the Spectrum days.

But, in the blue corner you’ll find the ZX Spectrum Vega, which is the work of Retro Computers and has been designed and conceived with input from Sir Clive Sinclair himself.

The objective of these systems is largely the same. They allow fans to play old Speccy titles without having to dust off their original hardware and cross their fingers that the delicate cassette tapes haven’t degraded over the past three decades. But, they are very different in form, function and execution.

With both costing £99 each, which one should get your money? 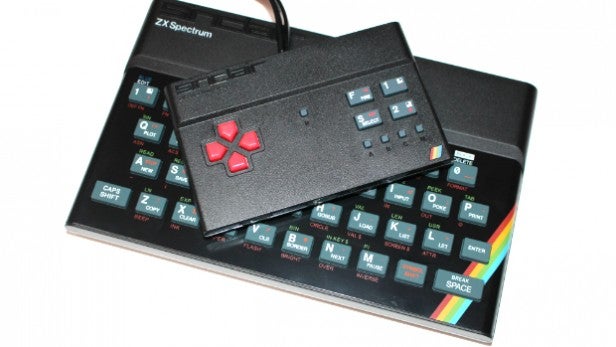 They may be replications of the same iconic hardware, but in physical terms the Recreated ZX Spectrum and ZX Spectrum Vega couldn’t look any more different. Sure, there are elements which are consistent across the two – the rubber keys, the famous rainbow stripe on the bottom right edge and of course that iconic Sinclair logo at the top – but these are cosmetic features that hark back to the original system so it’s understandable that the two machines would share them. In practically every other respect, the similarity ends there.

The Recreated ZX Spectrum has been designed to look as close to the original as possible, right down to those unmistakable rubber keys. It’s only when you look around the back of the device that you spot some new additions. There’s a switch to toggle between gaming and keyboard mode (it doubles as a Bluetooth keyboard), a micro USB socket (for power) and a button to initiate the Bluetooth pairing process. On the underside you’ll find a battery compartment for powering the Recreated ZX Spectrum when you want to be away from the mains.

The ZX Spectrum Vega on the other hand is much smaller, and hasn’t been designed to imitate the real thing aside from some aesthetic touches. It’s like a traditional gaming controller and even comes with a D-Pad and action buttons. It can’t be powered by batteries and has two cables leading out of the back – one for power (via USB) and the other to link it to the television via a composite connection. The only other aspect of note is the microSD card slot on the bottom edge.

In terms of design and build quality, there is one clear winner here. Elite’s machine looks like the real deal and is solidly constructed, while the Vega feels cheap and a bit flimsy. 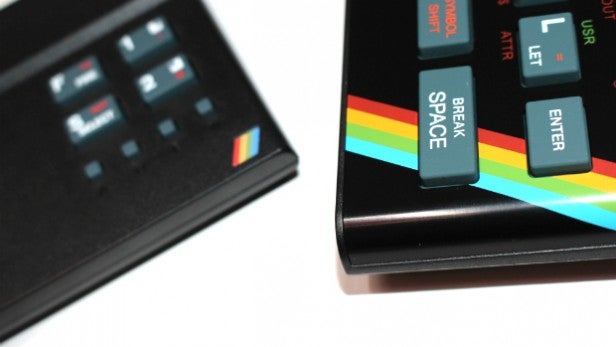 While the Vega is an all-in-one solution that plugs directly into your television set, the Recreated ZX Spectrum requires additional hardware and software to operate. At the moment it only works with iOS, but Android support – including streaming to Google’s Chromecast – is on the way.

The Recreated ZX Spectrum’s functionality is totally reliant on the companion application, which handles all of the emulation. Via this app you can purchase more games, tinker with settings and even find out a little more about the history of the system, and how this new edition came to pass.

The Vega is a little more basic, and offers a bare-bones menu system that allows you to scroll through the 1000 pre-loaded titles as well as load up more via the microSD card slot.

Both machines support save states so you can pause the game and return to it at a later date. Emulation performance is pretty much perfect across both machines, with games looking, sounding and playing just as you remember them back in the ’80s – just without those painfully long loading times.

While you might assume that the Vega’s plug-and-play capability makes it the clear winner here, the Recreated ZX Spectrum’s companion app offers a wide range of options and will surely improve and mature as time goes by. Granted, Vega’s firmware can also be updated using the microSD card slot, but it’s clear that it’s never going to be as slick as Elite’s offering. 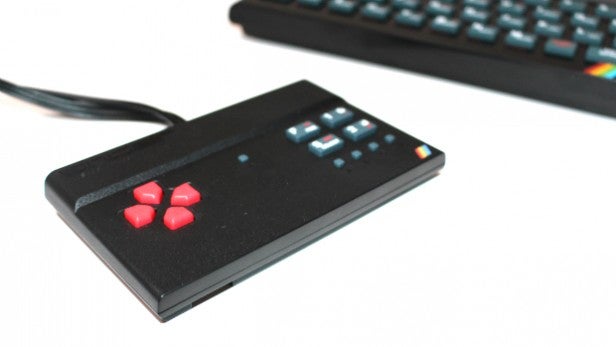 Because the Recreated ZX Spectrum is linked to your tablet or phone, the image quality is only as good as the screen you’re using. With pretty much every smart device boasting a HD display these days, the definition of the image is fantastic. When you stream to a television set, you’re getting a HD signal, too.

The Vega loses out in this area because it lacks HD output. It uses an old-school composite cable, and on a large-scale flatscreen television produces an image that is muddy, fuzzy and lacks clarity. Composite was considered a bit iffy a decade ago, but shipping a product with it in 2015 – and one that costs £99 – is a bit cheeky.

While purists could argue that by offering such a ropey connection the Vega is more faithful to the original hardware, the gulf in output quality between the machine and its Elite-made rival is striking. 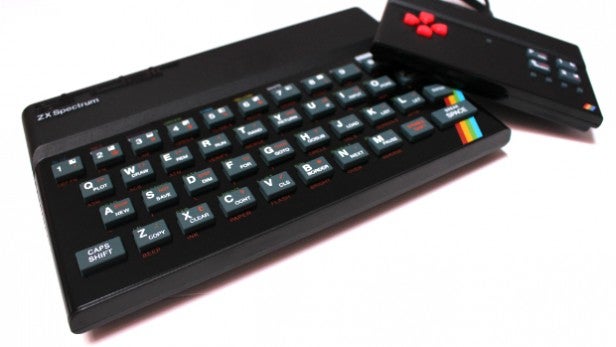 The Vega comes up trumps here. All you need to do is plug it into your TV, locate a USB power point and you’re away. There’s no need for any additional hardware or app downloads, and you can be playing Spectrum games in seconds. It’s much easier to get set up.

That’s not to say that configuring the Recreated ZX Spectrum is a pain, it just takes a little more effort. You have to pair the device with your tablet or smartphone and then download the app itself. It’s possible to stream the gameplay to a TV, but that’s an additional step that slows the whole process down.

It’s also worth pointing out that the Vega automatically maps controls to suit its new D-Pad and button setup, and for total newcomers this will present a less daunting physical interface than that of the Recreated ZX Spectrum.

Elite’s machine is trying to be as faithful as possible, right down to retaining the confusing control setups for all of its supported games. Bearing in mind that most Spectrum titles used entirely different keys for control, you’ll need to memorise several different layouts if you want to have multiple games on the go. Thankfully Elite has included an i-Daptive control option, where the controls are consistent across all titles.

For pure ease of use, the Vega comfortably comes out on top. It’s incredibly easy to boot up and play. The only complexity to consider is text input. Because there’s no QWERTY keyboard, the system uses an on-screen keyboard accessed by pushing a direction on the D-Pad to cycle through various letter groups, each assigned to one of the four action buttons. It’s not as elegant as the full keyboard on the Recreated ZX Spectrum, but it still works well enough. 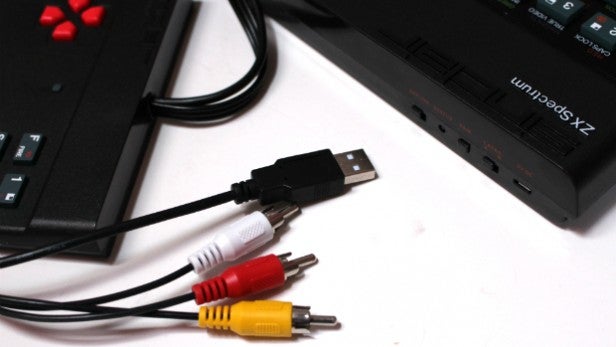 The Recreated ZX Spectrum’s companion app comes with around 40 games, although not all of them are free to play right from the off. You will have to pay 79p to unlock some of the juicier games though.

That might seem like a cheek when you’ve just splashed out £99 for the unit itself, but it does at least mean that the original developers are getting some kind of reward for making their games available on the machine. That should hopefully enable Elite to tempt more devs and publishers to support the device with software.

The Vega on the other hand has 1000 games pre-loaded onto it, all of which are accessible from day one. Quality varies dramatically, with boda fine classics like Knight Lore and Jetpac rubbing shoulders with some totally forgettable vintage offerings and more recent “homebrew” titles. It’s worth noting that Manic Miner, Chuckie Egg and Jet Set Willy are all exclusive to Elite’s system, although by using the Vega’s microSD card slot you can load these titles up if you have access to the ROM files.

The Vega is the obvious choice in this regard, as it not only comes with more games built-in but also allows you to augment that selection for free by loading ROMs onto the machine via the microSD card slot. However, this process is legally questionable and means that the copyright owner gets nothing for their efforts.

If you’re passionate about supporting the Spectrum development community – both past and present – then you won’t begrudge the 79p that is being asked for new games on the Recreated ZX Spectrum. 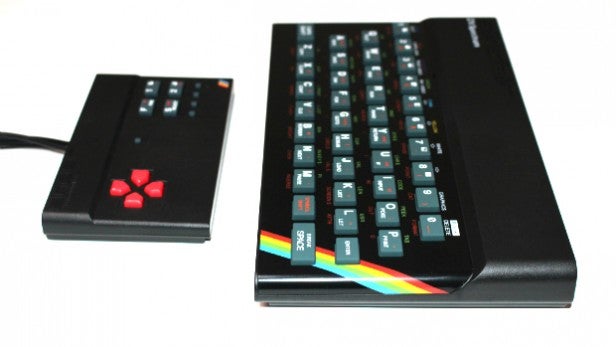 Both of these systems have good and bad points. The Recreated ZX Spectrum offers the most authentic experience and presents its titles in the best way – in HD – but is too reliant on additional hardware and has a limited selection of games available.

The Vega comes with a thousand games pre-loaded, is easier to use and allows you to upload games from its microSD card slot, but its composite output is disappointing for a device released in 2015 and the build quality leaves a lot to be desired.

The irony of these two systems launching at the same time is that the perfect Spectrum replication would ideally combine elements of both. The Recreated ZX Spectrum’s QWERTY keyboard offers the most faithful interface, but there are times when the Vega’s simple D-Pad and button setup makes more sense. Offering content via a companion application means Elite’s machine can deliver a slicker experience which has the ability to evolve over time, but the Vega’s plug-and-play approach means it’s better for quick gaming sessions.

Ultimately, which one you choose will be determined by the kind of experience you want. If you’re a hardcore Spectrum fan and will accept nothing but the very best replication of Sir Clive’s legendary micro, then the Recreated ZX Spectrum is the better choice, despite its lack of software and requirement for a smartphone or tablet. The fact that it doubles as a Bluetooth keyboard is a neat bonus, too.

However, those of you who want to casually dabble in the world of the Spectrum but cringe at the idea of using a full keyboard for control may want to consider the Vega, which has the added benefit of offering a wider library of titles from the get-go – and the ability to upload more via microSD card.

The Recreated ZX Spectrum is available direct from Elite.

The ZX Spectrum Vega is available from Funstock.co.uk.