Raspberry Pi Hardware
The Raspberry Pi computer comes in two
configurations (Model A and Model B). Both computers are equipped with
an RCA video port, a 3.5mm audio jack, a USB port, a microUSB power
port, an SD card slot, an HDMI port and as we said, a 700Mhz Broadcom
SoC.

You
will have to boot the machine from an SD card but a USB hard drive can
take over after the initial boot. It is not possible to boot without an
SD card. Switching it on and off is simply a matter of plugging it in
and out. 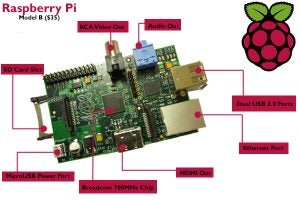 What will I need to get it working?
The
people behind Raspberry Pi have developed it to help keep costs down,
and therefore a lot of people will already have the extras needed to get
it working. For the display, you can plug it into an old analogue TV
(composite), a digital TV (HDMI) or a DVI monitor (using an adapter).
There is no VGA support but if you so desire, a rather expensive adapter
can be used.

Keyboards and mice are connected via USB in the
same way they are in typical desktop set-ups. The Raspberry Pi is
powered over microUSB and most people will have a microUSB phone charger
hanging around the house which can be used.

What software will the Raspberry Pi use?
Continuing
the low-cost, back-to-grass-roots approach, the Raspberry Pi computer
will initially use the open-source Linux software, which will have to be
stored on your SD card. The Raspberry Pi foundation recommends the
Fedora distribution of Linux for users initially, but other flavours of
Linux will also be supported, including Debian and ArchLinux. However,
because of issues with newer releases of Ubuntu, Canonical cannot commit
to supporting Raspberry Pi. Pre-loaded SD cards will go on sale soon after
launch. 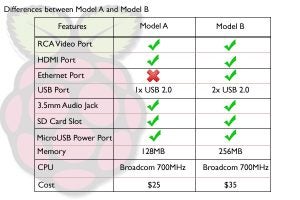 Those
hoping to run Windows on one of these machines will be disappointed
though as this is ARM-based hardware and even Windows 8 on ARM won’t run
‘officially’ on the computer as Microsoft and team Pi are not partners.
Android may run on the Raspberry Pi, but would require a developer out
there to port a version of Google’s software to work with 256MB of RAM.

Who is the Raspberry Pi aimed at?
The
Raspberry Pi was developed to help students learn computer programming
and there will be a second version of the Pi released in September which
will come with a case, to make it more sturdy (which the Raspberry Pi
Foundation says won’t add to the cost).

While the educational
sector will no doubt attract the majority of orders, there will also be a
lot of interest from the developer community and amateur enthusiasts
who will want to rediscover the joy of programming their own computer.
Some developers who’ve got their hands on one of the few Raspberry Pi
beta boards have already begun tinkering with them and you can see
below an AirPlay app working perfectly with an iPad.

When and where can I get a Raspberry Pi?
The
first batch of 10,000 Raspberry Pi units is rolling off the production
lines in China this week and will be shipped back to the UK before
hopefully going on sale early next week.

There is currently no
option to pre-order one of the units from the first batch of computers.
When they finally do go on sale, it will be only through the Raspberry
Pi website, with orders limited to one per person for the first batch.
This will be relaxed once production is in full swing.

You will
be able to pay by credit card, PayPal as well as offline payment options
being available. Pricing is in dollars even though the company is
UK-based because all the components were priced in dollars. The $25 and
$35 prices do not include local taxes and the mini computer should be
available internationally from launch. Shipping prices have not yet been
revealed.

We would love to hear from you about the
Raspberry Pi and whether or not you think it could be the catalyst for a
rejuvenation of computer programming skills in the UK and elsewhere?