Rainbow Six Siege has just received its Operation Chimera update, which adds an entirely new co-op zombie mode: Outbreak. But how does it stack up against the shambling hordes of other zombie games and modes out there?

Outbreak mode is the new co-operative addition to Siege, which pits the elite unit against an insidious zombie outbreak in a backwater US town. A Russian satellite crashes just outside the small town of Truth and Consequences, causing a virulent infection to spread from the Soviet relic, turning the population into zombies. Each mission is introduced by a pre-rendered cutscene, which sets up the scenario and gives some welcome characterisation to several team members. It’s nice to confirm after all these years that Thermite is, in fact, a bit of an arse.

The new game mode spans three missions, which chronicle various attempts by Team Rainbow to combat the infection and save the small town. Each of these missions is split into two halves, with a break (and a loading screen) between them. One operation has the team taking out a nursery for the infection, while another sees them mount a daring rescue of a doctor who may hold a cure; the big finale sees the team attempt to secure the Russian satellite that caused the outbreak. 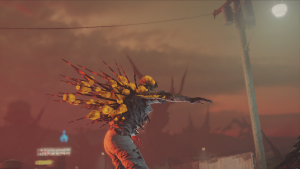 In practice, it plays a lot like Left 4 Dead, Valve’s co-op zombie shooter. You and your team must work together to push through the map, taking out the undead horde that stands in your path. Along the way, you have to defend key objectives or escort characters to safety.

It seems strange to praise a game for innovation because it has added a zombie mode, but Siege makes the most of its existing strengths with Outbreak.

The core shooting mechanics are fantastic, and they’re used to full effect in Outbreak. Enemies will drop to body shots eventually – but, like every zombie game ever made, if you want to bring them down quickly then you have to shoot them in the head. Siege’s tight gunplay and unique gadgets allow for deep tactical gameplay, as you sweep and clear rooms or hunker down and lay traps to fend off an enormous horde.

In addition to increasing the damage the enemies inflict on the players, pandemic reintroduces friendly fire into the equation. Teams must properly co-ordinate their lanes of fire and work together to avoid getting killed, either at the hands of the enemy or each other.

The zombie horde – known as the Roaches – consist of several variants each with their own strengths, weaknesses and combat styles. The standard enemies, Grunts, are weak on their own but can overwhelm in large numbers. Beyond these basic foes there are special infected zombies such as the Breachers, which explode upon death; or the Apex, which spawn and buff other enemies. It’s nice to see some imagination and variety here, when other games inspired by Left 4 Dead have just copied and pasted the special infected types. 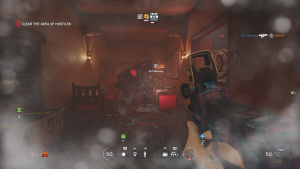 This dedication can be seen in the environments too. It would have been entirely reasonable to just zombify some of the existing maps. Instead, we get several entirely new areas to explore.

The new environments are gorgeous, if you’re into the whole infected, smashed-up town look. There’s great variation in the environments you fight in too, with open-ended street sections leading to close-quarters combat through the corridors of a hospital.

The Chimera update also brings two new operators, and unlike the Outbreak game mode, they’re sticking around permanently. Instead of giving us an attack and a defender like usual, Ubisoft has thrown two new attackers into the character pool: Lion and Finka.

Lion’s device sends out a drone, which – after a brief warning period – scans all enemies and reveals their positions, but only if they’re moving. This brief warning period balances Lion’s overpowered sounding ability, giving the defenders a valuable few seconds to get behind some cover and wait out the scan.

This ability is best used in conjunction with other gadgets such as Fuze’s Cluster Charge, which forces the defenders to move. Finka’s gives the attacking team a medic at long last, although her gadget functions are nothing like Doc’s Stim Pistol. Finka’s Adrenaline Burst ability temporarily buffs the entire attacking team, increasing their health slightly, reducing recoil, and reviving any downed team members.

Both Lion and Finka join a selection of returning characters in Outbreak mode. Some, like Ash and Thermite, are there for story reasons, while others are present for the suitability of their gadget. For example, Buck’s underslung shotgun attachment is perfect for those close encounters. Tachanka also makes an appearance and finally has a purpose in life, with his mounted turret being perfect for defensive situations. 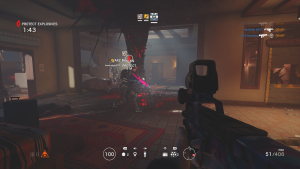 Left 4 Dead offered a great amount of unpredictability as a result of its AI Director, sadly Outbreak doesn’t offer nearly as much. Some encounters play out differently on repeat playthroughs, mixing up the enemies it throws at you or moving the defend objectives around the map. Nevertheless, it pales in comparison to the level of depth seen in Valve’s effort.

There are other minor complaints to levy at Outbreak, too – but the most glaring issue is that Outbreak is a time-limited event, meaning the entire game mode will disappear at the end of the month. It isn’t unusual for games to do this, with Overwatch running time-limited events such as Junkenstein’s Revenge around Halloween, but they all seem to be doing it for the same reason – to sell loot boxes.

Outbreak adds a whole host of new character and weapon skins, some of which look absolutely gorgeous, but all of which can only be bought using real currency. It feels like the time-limited nature is designed purely to appeal to people’s “gotta have ’em all” nature.

The random element of loot boxes also means that there’s a good chance you won’t get the skin you’re after, leading players down a rabbit hole as they chase that elusive skin. There are no duplicates, so there’s an upper limit on how much you can spend on the Outbreak packs. But if you want everything then it will set you back around £100.

Ultimately, if you can keep your wallet in your pocket and knuckle down to play the game, Outbreak is a worthwhile addition to Siege. While the loot box issue will sour the experience for some, it shouldn’t stop you from enjoying what the mode has to offer. 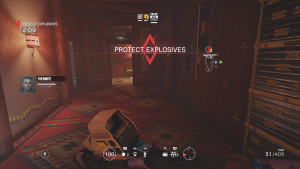 Unique enemies and situations held up by Siege’s already fantastic shooting mechanics make Outbreak one of the most engaging zombie-killing experiences of this generation. The time-limited nature of the game mode is a shame, but it may serve to cover for the fact that once you’ve played Outbreak a handful of times, there isn’t much reason to head back in for more.

Still, the star that burns twice as bright lives half as long, and Outbreak burns so very brightly on your first few runs.

Now you’ve read what we think of Outbreak mode, why not check out some of our other zombified articles: