Icelandic developer CCP’s sci-fi MMO EVE Online is set in a future where humanity has reached the stars, building new lives in a distant region of space known as New Eden. While the game itself is filled with peril – mostly from other gamers, who perpetually scrap over resources in the unregulated depths of space – players of EVE are also engaged in a more peaceful pursuit: searching for real-life exoplanets in the infinite cosmos.

The scheme is called Project Discovery, and it’s a ‘citizen science’ project run in conjunction with the University of Geneva and Massively Multiplayer Online Science. Researchers feed datasets to CCP, which gamifies them into its fictional universe as studies being conducted by in-game factions. Players can then opt in to analyse the information and feedback their results, earning game-relevant rewards for their efforts.

The hunt for exoplanets is actually the second iteration of Project Discovery. In 2016, CCP launched the first version alongside the Human Protein Atlas, which saw players investigating ‘strange biological matter’ – in reality, categorising the millions of proteins in the human body. 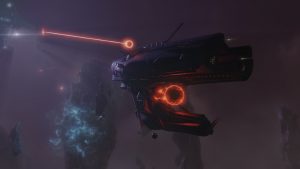 “It really resonated with us, this idea of giving back and helping to push science forwards,” says Bergur Finnbogason, development manager of Project Discovery at CCP. “We wanted to make sure that the data was of an altruistic nature – things like figuring out cures for diseases or finding exoplanets.”

EVE Online players responded extremely positively to the endeavour, blasting their way through the data in record time.

“With the Human Protein Atlas, we reached the first consensus on the whole data set in three weeks. We were planning between three and four months,” says Finnbogason. “We actually ran that dataset a few times through [the players] to absolutely get a consensus on the consensus; to see if it matches the first time around.”

The benefits for the researchers back at the University of Geneva are clear, providing access to a living processing network of volunteers, able to accurately work through reams of data far faster than even a dedicated university team.

“All of a sudden, we had a system where we could run [the data] a few times – this is impossible if you have post-doctoral students just manually looking at this data and categorising it,” explains Finnbogason. “Even running though the Human Protein Atlas two times would be like ‘you poor person!'” 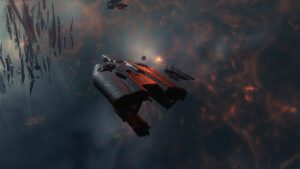 However, while there’s a fantastically huge number of proteins in the human body, there are still only a finite number to identify, while the universe itself is infinite. After winding the project down, CCP and MMOS turned their attentions to something even more fitting to EVE – helping search for evidence of exoplanets.

Players are fed images taken from telescopic observations of deep space, and are trained through gameplay to look for dips in the luminance of starlight. These instances of darkness can indicate an object passing in front of a star as observed from Earth, helping researchers determine where to focus their attentions in searching for stellar bodies.

Not all dips will be planets – some might be comets or even stellar dust – but the player activity helps narrow the focus to more likely candidates for actual planets beyond our solar system.

As you might expect from a game centred largely on spaceships and far-off worlds, the reaction of EVE players to the exoplanet-focused Project Discovery has been hugely positive.

“We’re one year into the exoplanets project and we’re seeing way, way, way, more participation than the Human Protein Atlas,” says Finnbogason. “We got around 32 million total classifications from the first iteration of Project Discovery, and we’re at around 80 million classifications now. The engagement is way higher.”

With players earning in-game rewards for their participation in Project Discovery, CCP does have to account for those who may want to just bag the sweet virtual loot and not honestly engage with the science of the feature. To counter the risk of the data being corrupted by people thoughtlessly clicking through datasets, Finnbogason’s team put a few safeguards in place. 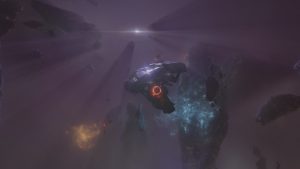 “We’ve had some issues with people trying to game the system, [but] we put in some ‘levers’ to help us deal with that,” he explains. “With the Human Protein Atlas, what [we] did was actually hold a bot challenge, an AI challenge, to see who can write the best AI to find [other cheating bots]? The approach was to just challenge the community, like ‘you guys write crazy bots to solve this – show us, teach us, let’s work together’.”

“We also have what’s called ‘standard data’, which basically does a trick of capturing somebody who’s lowering their accuracy,” Finnbogason continues. “Once your accuracy gets really low, you stop receiving rewards.”

While player efforts in EVE Online have yet to identify a scientifically recognised exoplanet, it’s more a matter of ‘when’ rather than ‘if’ they do. The datasets being provided to CCP are constantly improving, and with new satellite telescope deployments due to deliver even clearer images of the far universe, the chances of the community helping whittle down the noisy data to find actual candidates for recognition only increase. The question then is: who gets to name the new-found worlds?

“There is actually a naming convention to planets,” Finnbogason says. “So I guess the scientific community will have a fancy-schmancy name, but we’ll just call dibs on naming it. With peer pressure, maybe EVE players can make a name stick!”