The future of console gaming will be game streaming. It’s happening to movies with services such as Netflix and Amazon Prime Instant Video, and it’s happening to music with Spotify and Tidal.

With OnLive now bought out by Sony, there are two big players in the gaming streaming game – Sony and Nvidia.

Nvidia unveiled its Nvidia Grid game streaming service in November 2014, with the beta released in December. PlayStation Now on the other hand was unveiled much earlier, at CES 2014 in January last year, but has only just started arriving in beta form in the UK this month.

Both offer a similar functionality, albeit for different game platforms as we’ll explain below, but the general idea is that Nvidia Grid lets you stream PC games from the cloud straight to your Shield device without the need to install them on your device. PlayStation Now does the same on the PS4 with older PlayStation titles.

Currently both gaming streaming services are in beta in the UK, so at the moment you won’t get the full experience of either service.

But we’ve been lucky enough to trial both services in the UK and can give you all the information about how the two services compare in their current state.

See also: What is PlayStation Now? A guide to Sony’s streaming service 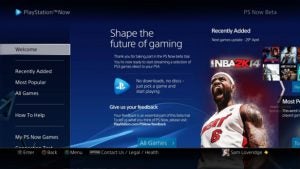 Nvidia Grid and PlayStation Now are fairly limited when it comes to their actual availability.

PlayStation Now is currently only for PS4 owners who applied to be part of a closed private beta via the PlayStation Now website. In the future, PlayStation Now will be available on PS3, PS Vita, select Sony Bravia TVs and PS TV, and one day to Samsung TVs and Sony Blu-ray players as well.

Until 30 June 2015, Nvidia Grid is in beta and is therefore being offered for free on those devices. But after that date, we expect Nvidia may extend the service’s availability as the paywall is put up.

See also: Nvidia Grid cloud gaming service – What is it and how does it work? 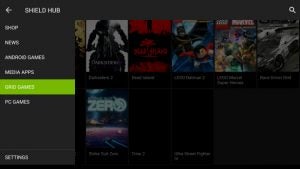 As both game streaming services are still in beta, you get access to the full array of titles completely free of charge. That means at the moment we don’t know how much PlayStation Now or Nvidia Grid rentals will cost.

As the games are all cloud based and you just stream them to your device, there’s no need to have anything installed on your console. That’s why both services are offering games on a rental basis rather than being able to buy them. 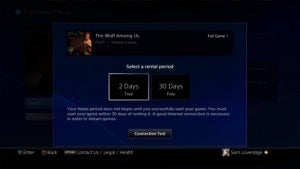 The pricing for Nvidia Grid has yet to be revealed, but subscriptions will start from June.

That means that, at the moment, you can get access to both services for free in the UK. Well, if you’ve got a PS4 or a Nvidia Shield Tablet or Nvidia Shield portable, that is. 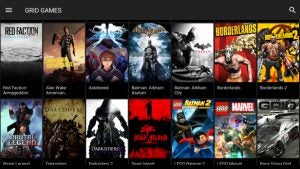 Officially, PlayStation Now requires a steady internet connection of 5-12Mbps in order to work properly. Of course, the lower the ping that your connection has, the better your game streaming experience will be.

If you have the option to used a wired Ethernet connection, you will also have a better connection.

For Nvidia Grid on the other hand, the internet requirements are a little more complicated. Game streaming quality automatically adjust according to the speed of your broadband connection. The recommended Wi-Fi speeds are 5-10Mbps for 720p HD and 30-50Mbps for 1080p Full HD.

You’ll also need a ping time of less than 60ms. Plus, Nvidia claims that you should use an Nvidia Shield ready router, which you can find the full list of on the Nvidia website. (http://shield.nvidia.com/routers) Plus, if you’ll definitely need a Bluetooth controller – even if it’s not the official Shield Controller – to play Nvidia Grid games on the Nvidia Shield Tablet. It’s impossible otherwise. 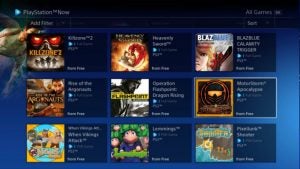 The Nvidia Grid service is therefore a lot more demanding in terms of what hardware you’ll need for the best connection. That’s partly down to the fact that you can’t hardwire the Shield Tablet or Shield Portable. You will, of course, be able to take advantage of the Nvidia Shield’s Ethernet port when it arrives later this year.

We expect most of you will be using your standard router provided by your broadband supplier, so we tried out both services using our pretty unreliable Sky broadband with the standard white Sky Hub.

Our home broadband speed averages out at about 7Mbps, so it falls within the recommended range for PlayStation Now and the lower 720p tier of Nvidia Grid.

As long as no-one in our home was streaming content from Netflix or any other service, we could access both services perfectly. There were occasionally connectivity issues when the Wi-Fi speed dipped, but overall, even when playing top-end PS3 games on PlayStation Now and PC titles through Nvidia Grid, we had a silky smooth experience.

Of course, as soon as anyone started to do anything vaguely bandwidth-hogging in our home, we couldn’t even get a connection to either service. So if you’re part of a busy household, you might need to look at your internet speeds before trialling the game streaming services. 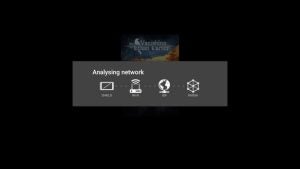 The major difference between Nvidia Grid and PlayStation Now is the games they offer.

PlayStation Now currently has a range of PlayStation 3 games on offer, although the idea is to extend its catalogue to PlayStation One and PlayStation 2 titles as well in the future.

On the PlayStation Now website, Sony claims the service offers over 200 PS3 titles to rent and over 100 of those are accessible via the subscription models. However, that’s only in the US at the moment.

In the UK it’s a rather different story. At the time of writing, the UK closed beta for Playstation Now offers 54 PlayStation 3 titles, the majority of which we wouldn’t actually want to play.

The highlights of those currently on offer include The Wolf Among Us, Batman: Arkham Origins, NBA 2K14, Killzone 2, Saints Row The Third and Far Cry 3: Blood Dragon.

Although the selection may feel a little limited at first, know that Sony is adding to the library. The next drop will occur on April 29, so hopefully they’re fairly regular. 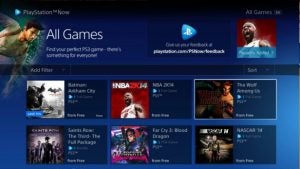 Nvidia Grid actually has less titles on offer than PlayStation Now at present. Nvidia’s streaming service currently has 46 titles to its name, but a couple of new titles get added systematically every week.

With Nvidia Grid, we actually feel that there’s a better selection of games when compared to PlayStation Now. Although there may be fewer games, you’ll find huge titles like The Vanishing of Ethan Carter, Dead Rising 2, Dead Island Riptide, Metro Last Light Redux, Saints Row IV, all the Batman: Arkham titles, a plethora of Lego games, Borderlands and Borderlands 2 and even Trine 2 nestled in the Grid library.

With the arrival of the Nvidia Shield in May, the Nvidia Shield service will also get bigger and better – especially when you think Crysis 3, The Talos Principle and Borderlands: The Pre-Sequel are all coming to the Android TV console. 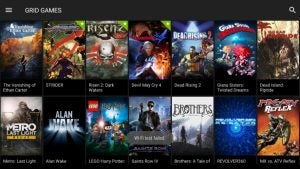 Unless you’ve got the UK’s most stable, powerful and speedy Wi-Fi connection, there are always going to be potential issues with streaming quality with Nvidia Grid and PlayStation Now.

As we’ve outlined before, if our home Wi-Fi network scenario is perfect and we can have the whole bandwidth to ourselves, the game streaming service is flawless and totally lag-free.

However, as soon as we started to see some other internet activity on our home Wi-Fi, there were some issues. With PlayStation Now, it started with a small notification with a yellow lightning bolt in the top-right-hand corner that indicated there were some connectivity issues. Then there was some serious pixelation.

However, you’ll notice that PlayStation Now has significantly shorter loading times in comparison to Nvidia Grid, and the service checks your connection before the game boots up – meaning you know in advance if you’re on the cusp of the recommended internet speed limits.

Nvidia Grid, on the other hand, we found to have a lot longer loading times for games, but experienced fewer connectivity issues when the game actually loaded.

Although Nvidia Grid sometimes runs a connectivity test before you start streaming a game, we’ve found that this doesn’t happen every time we start a Grid session. Because of its infrequency, we couldn’t work out that if Nvidia Grid recognises you’ve got a strong enough connection it doesn’t run the tests or it’s just a little temperamental. 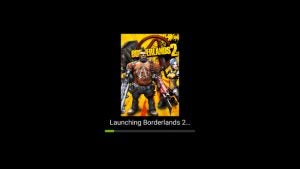 However, Nvidia Grid doesn’t seem as fazed by slight dips in internet speed mid-game. You’ll notice some gameplay input lag when this happens, but we’ve never experienced the pixelation issues we’ve had with PlayStation Now.

However, these were issues we experienced when no-one else was home. If anyone else is using up bandwidth, you can forget about game streaming unless you’ve upgraded your router and broadband.

We’re going to install one of Nvidia’s recommended Grid routers and see how that makes a difference to Nvidia Grid and PlayStation Now and will update this piece with the results.

PlayStation Now might not have the strongest line-up of games as yet, but it’s definitely the easier entrance point to the world of game streaming. If you’ve got a PS4, you’ve already got everything you need to get started, even if you’ve only got your basic broadband router equipped.

Nvidia Grid has the better game library full of highly rated AAA games, but you need a stronger internet connection to reach 1080p Full HD, preferably one of the recommended routers, an Nvidia Shield device and a Bluetooth controller just to get started.

At the moment, PlayStation Now is definitely the stronger choice for ease alone, but it’s early days for both these services, so everything is still to play for.