2015 is definitely shaping up to be the year of virtual reality. We’ve seen the HTC Vive with SteamVR, which will be a purchaseable consumer product by the end of the year and now we know we’ll be able to buy Project Morpheus too in the first half of 2016.

Oculus is still chugging along well with its latest Crescent Bay headset, but without a release date and lacking the controller input, we fear they might be left behind a bit.

With the latest Project Morpheus headset, Sony is pushing the technology, offering a resolution of 1920 x 1080 pixels per eye. The OLED displays allow for low-persistence while the 120Hz refresh rate means incredibly smooth gameplay.

And, just to top it off, games can be rendered at 120fps, which Sony claims is the ideal for virtual reality. As for latency you’re looking at under 18 milliseconds, which is less than half the original Morpheus headset. 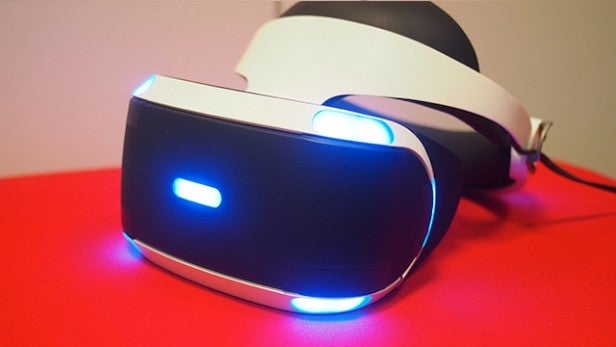 TR: Do you think VR can ever be truly immersive if you’re always tethered to a console or PC?

Dave – Good question. If you do The London Heist, you can probably make a good decision yourself on that. The experiences we’ve been playing with, you kind of forget. I understand what you’re saying in that there’s obviously limits to placement, but even if you’re not tethered there’s walls and things. We’re doing a lot of experimentation, so there’s probably another layer for us to go through in terms of safe play space and that sort of thing. But PlayStation is used to that kind of thing.

George – There are a bunch of different types of experiences as well. So some of them at the moment have been quite physical, you might have to stand up to play. But there are a few that you can play from a seated position, so you not restricted in your motion and your movement then. I think it just depends on the experience at the moment.

TR: Do you think that VR experiences are going to change now that we’ve got the newer headset that supports 120Hz? Are developers going to focus on the actual gameplay, or just the immersion?

Dave – There’s technical presence and then there’s forgetting. To be honest it’s really that we’re trying to make people forget that they’re in VR and think they’re somewhere else.

George – In terms of the immersion, if we were trying to do this demo on the previous Morpheus headset, there’s certain things that we can do now with this headset that means we can push the technology and push the concept further.

Allowing players to have that autonomy over the desk and be very close up and personal to all the different things there, and having that tactility of being able to open drawers and desks, pick things up and have it close to their face – we would have been quite wary of that with the previous headset because obviously the resolution is higher now.

Dave – If you look at The Deep [Sony’s shark-cage Morpheus demo] last year, to The London Heist this year, The Deep encouraged you to look around slowly. It’s a bit more passive. Now we’ve got pixel persistence, you can dodge bullets and you can actually move quicker. The main thing is you forget that you’re in VR and you’re in this other place then. 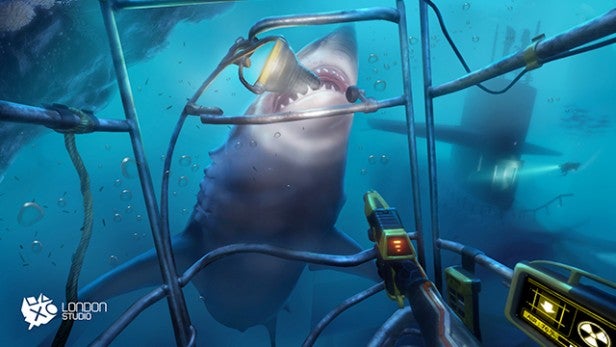 George – If you look at The Deep, obviously you’re in murky water and it descends hundreds of feet into the ocean, you can get away with the visual fidelity not being super sharp. Same with VR Luge, because you go really fast down a track, you’re not stopping to explore.

Dave – You’re distracting the players with what’s happening anyway. But with the new headset we were all really pleased for a number of different reasons. Internally you’ve got the upgraded panels and the fact that there’s no blur. But it’s also the comfort of it. I mean I have really big glasses – the second biggest glasses in our studio – and early doors I went out and bought some disposable contact lenses to try out demos on various headsets. But now it’s fine. The whole weight of the new headset is so much lighter.

Early, early, early days it was like a cycling helmet with the move controller taped on. It was super weird. At that point, I was really like “are we really going to get to a point where we have a credible consumer product?” But what they’ve done here is brilliant. 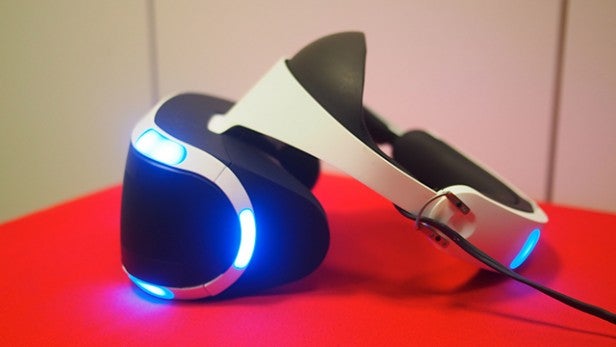 TR: How do you think the DualShock 4 makes Morpheus a slightly different virtual reality experience to others around at the moment?

George – It’s the controller input again. You’ve got the gyroscopes, you’ve got the touchpad, you’ve got all the haptic feedback that you’re going to get back from that system as well. And because you’ve got the camera it becomes a peripheral that can be tracked, so it opens up a lot of interesting opportunities. Where some of the controllers I’ve seen so far have felt like an interesting step, but they feel like they’re almost too conventional steps in terms of the way they’re trying to control those game systems.

This is offering a little more variety overall and a bit more flexibility from a creative perspective in particular.

Dave – What I think about is the PlayStation eco-system. There’s quite a few different components, but at the same time it’s uniform. The fact that every PS4 is the same is a huge benefit.
So we’ve got quite a few things to play with there: we’ve got the DS4, the Morpheus itself, we’ve got Move and that’s quite a lot of flexibility for us as developers, with the backdrop that they’re the same for everybody. So I feel like we’ve got the best of both two worlds with that. 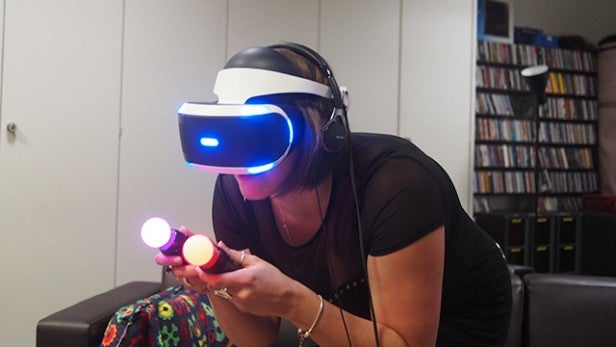 Dave – For me, from a studio perspective, we put quite a lot of people onto it a couple of years ago, and at the time it felt quite risky to be honest. We were super excited about it, but over that time, seeing the amount of support and excitement grow and the number of developers I talk to or I interview for jobs that say “Yes, I’ve got a kit at home because I want to dabble”. The excitement around it has been phenomenal. It’s a validation of what we’re doing.

It’s really nice to be a part of that.

George – It’s more competition. But also it’s healthy competition. If it wasn’t an area that could grow in the future, I don’t think you’d find many people that were in that space. The fact that lots of people are jumping in is really good. It validates that it’s a space that a lot of people want to get involved with. A lot of money is being pumped into VR now around the world.

Dave – And in a lot of industries now too.

TR: Do you feel like devices such as Google Cardboard and Samsung’s Gear VR headset cheapen what you’re doing or detract from the bigger VR picture?

Dave – It’s just a different kind of experience. It’s like the difference between mobile gaming and console gaming. They’re different experiences and people consume them in different ways. 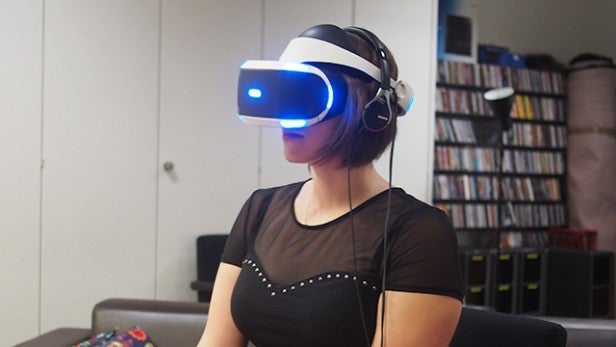 TR: How important do you think audio experience is for virtual reality and Morpheus is?

Dave – I think it’s hugely important. I used to run the audio department back in the day for Sony and I’ve been a musician so I’m really into audio anyway.

We’re all talking about virtual reality like you can see everything, but actually we have looked at what it’s like to just have that binaural audio. As a sense it’s amazing. To have that feeling of someone coming really close and whispering, it’s intense.

George – I think it’s hugely important. From a creative perspective as well, it opens up a lot more opportunities to diffuse the visuals to a degree, to really amplify the sound. Again, with a more traditional experience, you need the graphics to be up to a certain level, the visuals have to be on point, the effects have to be great, the sound has to be equally on a par. But what we’re finding is that when you take a few components away and just focus on one or two, like a demo that’s all about 3D audio for instance, it’s a completely different experience altogether. It does really focus your mind the less you have to see, you’re kind of desensitised and your ears take over to make everything really amplified.

Dave – Audio can be a great cue for players. You’re looking over here and then you hear something. That’s very instinctive because you’ll look. You can use it to guide the player to look where things are happening next.
TR: Do you think Morpheus experiences will start off being shorter until people get accustomed to virtual reality?

George – It depends. If you’ve got the right experience, you can stay in Morpheus or any VR headset for a long enough time. The nausea is the biggest issue in terms of whether you can stomach it, but the presence is now to a point in terms of the latency and the refresh rate and the high fidelity visuals that it has reduced dramatically and isn’t as much of an issue.

But it’s making sure that the experience you build is suitable.

Dave – Suitable for the length of play and engaging enough too. I think you could make experience where you could be in there longer. I mean you’re not talking about The Matrix here, but yeah, longer than five minutes. 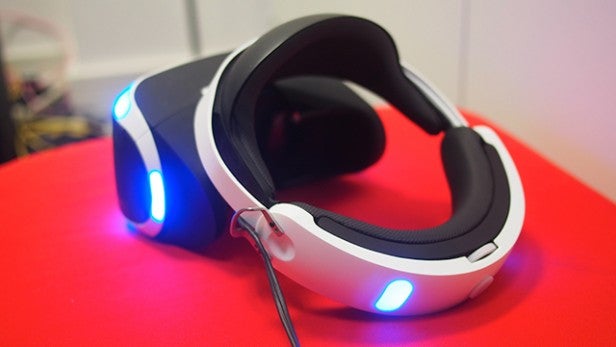 TR: How do you think developers are going to adapt to VR?

Dave – The fundamental thing that we’re seeing is that there are two approaches. One is from the ground up, what can we do with this? Or, it’s here are all these game mechanics that have worked before, I’ll try and get them into VR.

George – It’s definitely one of the key things that we’ve realised.
I’ve said to the designers time and time again, everything you’ve learnt up until now, just throw it away. Even the simplest of things like having an UI on the screen, it’s a three dimensional problem now. It’s not just a case of 2D artwork. It’s really eye-opening how many things you have to relearn.

It’s a great thing too, because it opens so many doors and opportunities to explore different kinds of experiences.