The wide price variations mean that there are plenty of cards to choose from. At the bottom end of the scale you’ll find GTX 980s that run at stock speeds or with modest overclocks – one card from Zotac boosts the core to 1,165MHz, while another from MSI ups the core to 1,216MHz but adds just 10MHz to the memory.

More money means better overclocks. Spend £500 on an EVGA Superclocked card and you’ll get a core that runs at 1,241MHz, and £527 will net a card with a core and memory clocked to 1,291MHz and 7,200MHz respectively. 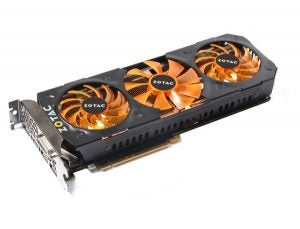 It’s a similar story if you’re buying AMD. More affordable R9 290Xs come with 30MHz or 40MHz core overclocks with no memory speed boosts, with higher tweaks available if you spend more – some cards that cost more than £300 run memory at 5,400MHz rather than 5,000MHz.

It’s become the norm to get free games with high-end GPUs, and nothing is different here. The GTX 980 comes with three top-notch and brand new Ubisoft titles: Assassin’s Creed: Unity, Far Cry 4 and The Crew. AMD’s card is part of the latest Never Settle bundle, which gives gamers the chance to pick three free games from more than thirty titles. The current bundle is space-themed and includes Alien: Isolation, Star Citizen, Deus Ex: Human Revolution and many other games.

As usual, run through a checklist of common pitfalls before buying a new card for your PC. Make sure your PSU has enough connectors, that your motherboard has the right PCI-Express slot – a 3.0 slot with 16x bandwidth will be perfect – and that your case has enough physical room to accommodate the card.

Also consider future upgrade paths. Both of these cards touch on 4K gaming, but neither will run every game smoothly at this high resolution – to get those frame-rates you’ll need a second card. If that’s something you’ll consider, make sure your motherboard has a second full-size PCI-Express slot that runs at 8x speed – the minimum amount of bandwidth required to get these cards running at top speeds. 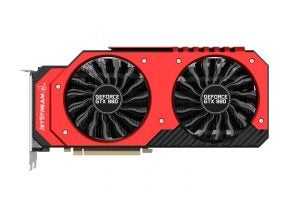 Nvidia’s GTX 980 deploys a newer, faster and more efficient core, and it’s the clear winner in a straight fight between these two cards. It’s got the pace to handle any game at 1080p and 1440p, and even coped with four out of the five test games at 4K – only Crysis 3 proved beyond its abilities.

The R9 290X proved almost as fast at 1080p and 1440p, but it wasn’t quite as good at 4K gaming, and its theoretical results showed its relative lack of power. It’s hotter and consumes more electricity than Nvidia’s card too.

The R9 290X also faces unexpected competition from Nvidia’s GTX 970. The AMD card is equal or better than its rival in most of our benchmarks – but only just – and it’s got more grunt in the theoretical benchmarks.

Our conclusion, then, is that it’s less about competition between these two flagships – and more about different usage cases.

The R9 290X is a superb card if you want to play 1080p or 1440p games, it’s not as expensive as the GTX 970, and adding a second card is a potential upgrade to 4K. The GTX 980 costs more, but it’s markedly more powerful and much more efficient, which means it’s the current leader when it comes to single-GPU PC gaming.

Next, read our comparison of the Best SSDs right now