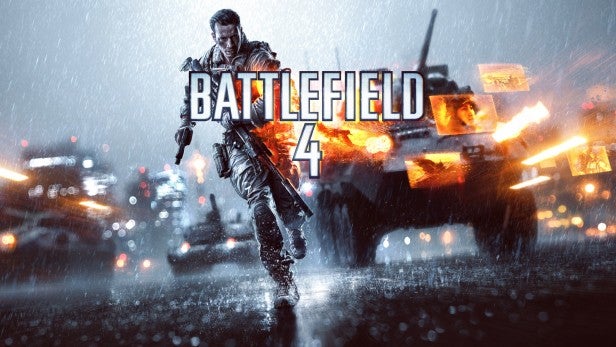 Battlefield 4 is one of the less demanding games in our test suite, which means that both of these cards can shoot for 4K resolutions – as long as the conditions are right.

Suffice to say that neither GPU had an issue with running the game at 1080p. The AMD card’s average of 72fps is excellent, the GTX 980’s 86fps result is even better, and both GPUs saw their minimum framerates rise above 60fps, which means perfectly smooth gameplay.

Neither card struggled with 1440p, either. Nvidia took the lead with a 55fps average and, while the R9 290X’s 46fps result is slower, it still won’t have any issues running the game.

In our 4K benchmark the R9 290X returned minimum and average results of 29fps and 37fps, but those results were beaten by the 31fps and 41fps speeds of the GTX 980. We achieved those scores by running the game at Ultra quality with only anti-aliasing disabled – with this feature added, neither card averaged above 30fps.

AMD’s GPU proved capable in Battlefield 4 at every resolution but, in every test, it was soundly beaten by Nvidia’s newer hardware. It’s also worth looking elsewhere: the R9 290X’s averages were exactly the same as the GTX 970, which is available from £247 – a little less than the AMD card. 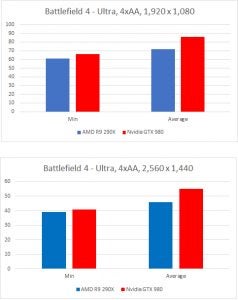 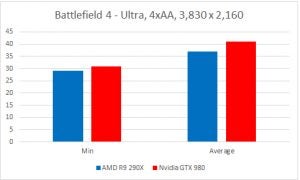 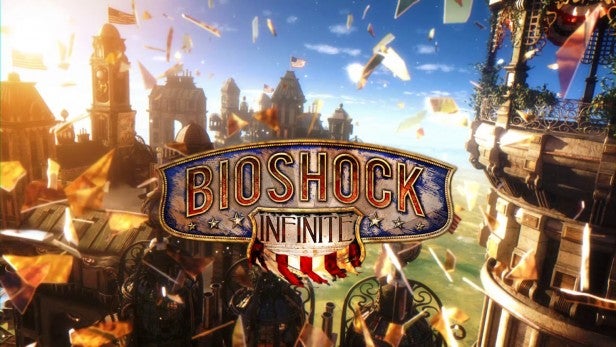 Nvidia’s card maintained its good form in Bioshock Infinite, with an average framerate of 107fps at 1080p – far beyond the 88fps that the R9 290X could manage. That gap was maintained at 1440p: Nvidia’s GPU led the way with 77fps, with the AMD hardware fifteen frames behind.

Neither card will have difficulty playing Bioshock at these two resolutions, though; every average was beyond 60fps, and the lowest minimum came from the AMD card at 1440p, where it hit 51fps. That’s still a superb result.

The GTX 980 led the way at 4K with minimum and average framerates of 34fps and 41fps. The R9 290X’s average of 30fps indicates that the game will be playable on AMD hardware at such a high resolution, but its 25fps minimum means that graphics won’t be totally smooth.

Once again, it’s a convincing win for the Nvidia card. The R9 290X doesn’t just fall behind the Nvidia flagship, either – it’s also slower than the GTX 970 in every Bioshock benchmark. 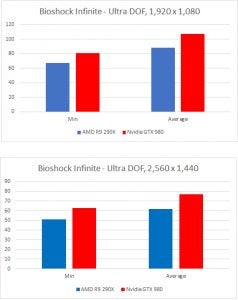 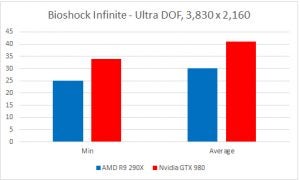