I was never a fan of the Note series. For me, ‘phablets’ are the antithesis of everything I want from a mobile phone, but I’ve long since accepted that other people disagree. The success of the range, and the way rivals have imitated Samsung’s bigger is better approach, is proof enough that I was wrong.

But I don’t think I’m wrong about this – Samsung has abandoned its hardcore fans.

Personally, I think a 5.7-inch phone with a stylus is bonkers, but some people love it. Moreover, they love it not just because it’s big and has a stylus, but because the Note phones have always catered to the ‘power user’.

They had microSD cards, big and removable batteries, bleeding-edge features like USB 3.0 and always introduced a faster, more capable processor than the ‘S phone’ that preceded it.

This year the Galaxy Note 5 doesn’t have microSD, it has a smaller battery that’s non-removable and it uses the same processor as the S6. It’s a big S6 with a stylus and a few token upgrades, such as faster wireless charging and 4GB of RAM – 1GB more than S6.

Meanwhile, the likes of the OnePlus 2 are beating Samsung to the punch in adding USB-C, the kind of feature past Note phones would have pioneered.

The fan reaction has been predictable.

The top post on the Galaxy Note 5 community on Reddit simply reads: “It’s official, everything we didn’t want the GN5 to be, it is.”

One commenter rules out upgrading from the Note 3: 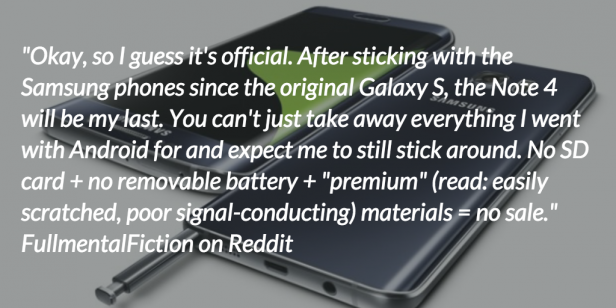 While another bemoans the fact that Samsung hasn’t listened to its fans. 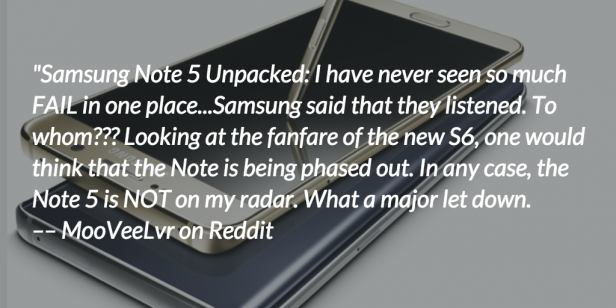 And they are joined by a chorus of other hardcore fans on Reddit and other enthusiast sites, many of whom have bought every version of the Note range, who won’t anymore.

They’re frustrated that Samsung seems to have ignored everything they liked about the Note series. This is, in their eyes, Samsung behaving like Apple – dictating what’s right, rather than listening to what people want from the Note.

Samsung’s choice seems all the more baffling given the simultaneous launch of the S6 Edge+. It’s basically the same phone without the stylus. It’s perfect for anyone who wants a big, attractive phone – it’s the perfect rival to the iPhone 6 Plus. Samsung didn’t need to neuter the Note 5 to attract the design conscious consumer.

I suspect this is why Samsung isn’t planning to sell the Note 5 in the Europe and UK. It’s simple enough when one version of a phone is smaller and one is bigger – it’s personal preference. But how do you explain two nearly identical phones that are the same size? Perhaps someone in Europe understands that better than head office.

The implication from Samsung is that Europe and the UK care less for the stylus, which I can understand – it’s a more popular feature in Asia than it is here. But I can’t believe there aren’t ‘power users’ in Europe who would like a phone with a bigger battery, a microSD card slot and the flexibility to replace and upgrade the battery.

After all, the Note series clearly sold well here before – if it didn’t, Samsung wouldn’t have persevered for so long.

Whatever the reasons, Samsung doesn’t seem keen to explain its choices in detail. Perhaps the Note 4 was a flop, perhaps it wants to focus on being cooler and more mainstream?

One thing is for certain, though – Samsung just lost a great many loyal fans.