Which is the best budget Windows phone?

Nokia has just announced the Lumia 530, the first Lumia phone to sell for under 100 Euros from day one. We may not buy phones in Euros here in the UK, but that means it should be comfortably the cheapest Windows Phone yet within a few months.

But what’s new, and is this phone actually better than the Lumia 520? Let’s take a closer look at how the two phones differ.

The most obvious difference between these two phones is that the Nokia Lumia 530 ships with Windows Phone 8.1, while the Lumia 520 is still waiting for its upgrade from Windows Phone 8. It is coming, but when? Nokia has said we’ll get the Lumia 520 update in August, but having experienced more phone update delays than we can count, we’re not relying on it landing on time.

There’s also Cortana, Windows Phone’s digital assistant, but it’s only in Beta at present (the full release is due in mere weeks, though).

The Nokia Lumia 520 was a bit like a more angular version of the Lumia 620, an even older Windows phone (which we loved, incidentally). Nokia has tweaked the design again for the Lumia 630.

You still get a removable plastic back that’s super-colourful, but the silhouette of the phone has been softened a little. The slightly severe edges of the Lumia 520 have been tamed into curvier contours, giving it a look that’s actually a bit closer to the older Lumia 620.

It’s also a bit softer-looking than another recent Nokia we reviewed, the Nokia Lumia 630. The back of the 530 is a single smooth curve, where the 630 has a bit more edge to it.

While a doctor might not agree, there’s nothing wrong with carrying a little extra weight around the middle, especially if you’re a sub-£100 phone. You can get the Lumia 530 in the now-standard green, orange, yellow and black shades.

Nokia told us it likes to move with the fashion on colours, and last year the Lumia 520 was all about bright yellow, red and blue/cyan (as well as black and white). 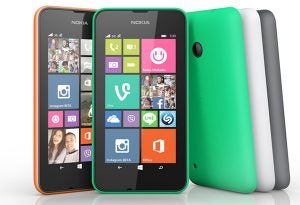 Aside from being a bit tubbier than the old model, the Lumia 530 is similar in size because it has a 4-inch screen, much like its predecessor. But it’s a standard TFT LCD screen, where the Lumia 520 had an IPS display.

This is quite disappointing as more basic TFT display offers poorer viewing angles than the IPS type. Tilt the phone the wrong way and the colours will invert – it’s not pretty.

Consequently, image quality may actually be better in the old model, although Nokia has also bolstered resolution in the new model. It has a 854 x 480 pixel screen where the Lumia 520 has a 800 x 480 one. Both are a little on the low side for a 4-inch screen, but let’s not forget these are entry-level phones.

Why the extra pixels? It’s because the Nokia Lumia 530 does not have hardware soft keys, the persistent nav buttons that sit at the bottom of the screen.

Instead they’re built into the touchscreen, meaning they take up a bit of extra space. So while we may say the Lumia 530 and Lumia 520 have the same size screen, their aspect ratios are actually a little different.

You might think that these touchscreen buttons will cut into the screen too much, but Microsoft has made sure Windows Phone 8.1 soft keys are as small as possible while still being easy to use.

These software keys were actually not possible in older phones like the Lumia 520 because Windows Phone 8 demanded that a phone have hardware soft buttons. With each update we see Microsoft gradually strip away the minimum spec guidelines initially put on the system’s hardware. Is that a good thing? The jury’s out, but it makes cheaper phones like the Lumia 530 possible.

One negative knock-on of the loosening of Windows Phone’s restrictions is that Nokia can now produce Windows phones that have hardly any internal memory. Where the Lumia 520 has a respectable 8GB of internal memory, the Lumia 530 gets just 4GB.

If you got a full 4GB to play with we’d be happy, but once the OS and inbuilt apps have had their share, you get significantly less. If you want to store any music or videos on your phone, you’ll definitely want to invest in a microSD memory card – the Lumia 530 has a memory card slot under its plastic back.

We’ll admit – seeing Windows Phone essentially become like Android in its ‘race to the bottom’ is a bit disappointing, although probably necessary for Windows to hook in more new fans.

So far, the Lumia 530 seems like a Lumia 520 that’s had its edges shaved off, both in terms of spec and design. It’s also true when we look at the phone’s engine, the CPU.

At first glance, the Lumia 530 seems a solid upgrade to the Lumia 520. It has a quad-core 1.2GHz processor while the Lumia 520 has a dual-core 1GHz one. More cores, higher clock speed – what’s not to like, right?

It’s not quite that simple. The Lumia 520 uses a pair of Cortex-A9 cores where the Lumia 530 has four Cortex-A5 cores. The older phone has the more powerful cores, by quite a margin.

We imagine this may mean that the Lumia 530 may struggle to provide consistent frame rates in 3D games, but we’ll check this out in our full review, coming soon.

Is there no end to the Lumis 530’s cuts? It appears not. Its camera has dropped the autofocus feature of the Lumia 520, adopting a fixed focus lens.

This means that you can’t alter what you take a photo of by pressing the touchscreen. You just have to press the shutter button and hope for the best. The main issue with fixed focus cameras – other than that they’re generally rubbish – is that you can’t take pictures of anything close up. Macro-style photography will not be possible with the Lumia 530. The Lumia 530 also loses the physical shutter button, seen in the 520.

Both the Lumia 530 and Lumia 520 have 5-megapixel sensors, though, so with good lighting and a subject that’s far away, image quality should be roughly comparable (ie. ok-ish).

The Lumia 530 is a significantly lower-end phone than the Lumia 520 in many respects. Before thinking a higher number means better hardware, think twice. Once the Lumia 520 gets in on the Windows Phone 8.1 action, it’ll be the better phone to buy, if it’s still available by then.