The Nikon 1 V3 is a new compact system camera. It builds on the foundation laid by the two former generations of 1-series cameras, sticking to the 1-inch sensor size that has been seen in every model in the range.

However, it’s the most dramatic change we’ve seen in a V camera to date, so exactly how does the Nikon 1 V3 differ from its predecessor the Nikon 1 V2? 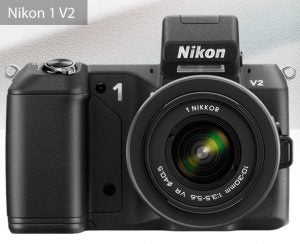 The Nikon 1 V3 design is a lot more accessible to most eyes than the V2 model. The angular look and large handgrip have gone. You could almost mistake the V3 for a compact camera from a distance.

We’ve seen other compact system cameras go down this route in recent times too. The Panasonic GM1 is another tiny CSC with near-compact proportions.

The lower-end Nikon 1-series cameras have always used small, very compact bodies, but in previous generations the higher-end V-series models were chunkier. This time the V3 is actually a bit of a looker, if in a fairly conventional sense.

Many of you may miss that hand grip, though. To compensate, Nikon will offer a handgrip accessory with its own shutter button, control dial and function button. 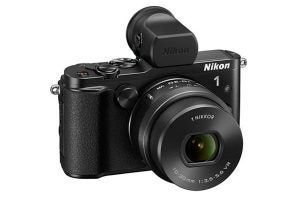 The inbuilt Viewfinder is gone

The key part of the V3’s slimmed-down design change is Nikon’s dropping of the viewfinder. A viewfinder accessory will be available, but it’ll no longer be built into the camera as it was in the Nikon 1 V2. Last time around, a big protrusion on the top plate added a flash and EVF. In the V3, there’s a pop-up flash, no viewfinder.

Even the look of the optional Nikon 1 V3 EVF has changed. It’s small and round, again discarding the angular design associated with the V2. In pure aesthetic terms the V3 is much better than the V2.

Many photo enthusiasts will not be impressed by Nikon’s decision to drop the inbuilt EVF – which was the whole point of the Nikon 1 V2 for many. However, Nikon has mitigated with a tilting LCD display. Last time, the LCD was fixed.

A tilting screen is indispensable when you want to compose a scene from a tricky angle. Particularly for ground-level shots, it is at times much more useful than a viewfinder. 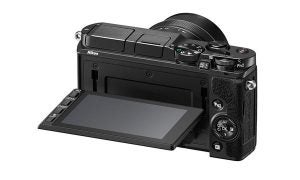 Nikon has removed the AA filter from the Nikon 1 V3. This is a trend we’ve seen a few times recently – most notably in the FujiFilm X-trans sensors used by cameras like the FujiFilm X-E2.

An AA filter is used primarily to avoid weird moire visual effects in tight-knit patterns, but taking it out can increase detail in photos.

There’s clearly a focus on ‘photo detail’ in the V3, as the megapixel count of the sensor has also been increased, from 14 megapixels to 18.4. Of course, as the sensor is still fairly small an just one inch, whether this extra resolution will actually be beneficial is up for debate.

Shooting speed is even faster

The Nikon 1 series cameras have always been some of the fastest CSCs around, and the Nikon 1 V3 is even faster than the last models. It claims some pretty jaw-dropping figures.

Burst shooting with continuous autofocus is up to 20fps, and without refocusing it’s up to 60fps. This decimates much of the CSC competition, and is up from 15fps (with AF) in the Nikon 1 V2.

Its relatively small sensor guarantees the Nikon 1 V3 won’t be able to compete on pure image quality with Micro Four Thirds and APS-C sensor cameras, but for action shooting this is starting to sound like one of the best interchangeable lens options.

High-speed video is another solid addition for the action photographer. The Nikon 1 V3 can shoot at 120fps, 720p resolution – a video mode commonly seen in high-end phones, like the iPhone 5S, these days.

In the Nikon 1 V2, usable (ie 720p or higher) video is limited to 60 frames per second, which gives a much less marked slow-motion effect.

Nikon has taken a lot out of the V3, but Wi-Fi has been added. It’s an obvious extra, something that is really required in a new mid-range or high-end CSC.

In the last generation, you had to buy a separate Wi-Fi accessory dongle to get connected wirelessly, the Nikon WU1. It costs around £50, so it’s good we won’t have to worry about it in future.

Nikon’s new approach to the Nikon 2 V3 does confuse its 1-series line-up a bit. The V-model is no longer the geeky brother among the 1-series cameras. And buying the extras Nikon has chopped out – the handgrip or the viewfinder – will be expensive. However, many of the improvements to speed are impressive, and we much prefer the look of this new model.

Next, read our best cameras round-up or What Digital Camera’s Nikon D4S vs D4