The new iPad is almost guaranteed to become the best-selling tablet of the year, but can it really replace a dedicated ebook reader like the Amazon Kindle? In the past we’ve have said no. But can the “iPad 3” change that?

The top benefit of a dedicated ereader like the 2011 Kindle or Kobo eReader Touch is an eink screen this looks completely different to an LCD screen, and functions differently too. Behind the E-ink screen front are thousands of black and white microcapsules pulled forward or back to form text and images.

There’s light emitting-element involved, making the display much easier on the eyes. Light-emitting screens like the iPad’s can cause eyestrain – especially when reading, which makes your eyes focus much more intensely than when watching a movie, obviously.

Anatomy of an E Ink screen

The new iPad doesn’t change any of this. While the screen is a massive improvement over the iPad 2’s, it uses the same basic IPS technology. IPS, or in-plane switching, is a type of LCD designed to improve viewing angles. It works wonders, but the light-emitting backlight is still there underneath.

If you get headaches after using a computer screen for a few hours, E ink is the best reason to buy a Kindle over an iPad. However, the increased resolution of the “Retina Display” screen of the third-gen model will make the display much more pleasant to peer at. 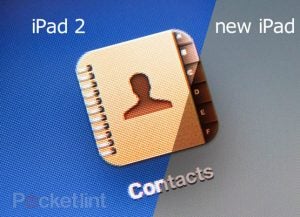 Part of the reason why LCD screens can be so tiring is that your eyes can discern the pixel structure behind an image. While the iPad 2 didn’t have a downright ugly screen like the Archos 70b, its 1,024 x 768 pixel display made it easy to discern each dinky dot. The whole point of Apple’s “Retina Display” ideal is to remove this effect. And from what we’ve seen, it works here in the new iPad just as it does in the iPhone 4S.

When reading, this will make text much, much smoother – more so than on a Kindle. However, E-ink still has its advantages. Zoom in far enough and you’ll see that the new iPad screen is still an arrangement of red green and blue sub-pixels, where the black and off-white of E-ink is made by elements of that colour. 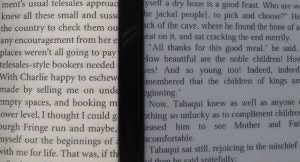 The E Ink screen of the Sony PRS-T1

Many are still put off by the greyish background of E-ink screens, however. After all these years of development, the contrast level of these screens is still limited, and is less than a real-life book or an iPad screen.

The greatest practical benefit of a Kindle over an iPad is its smaller size. A Kindle will fit into many a coat pocket, the iPad will not. This doesn’t stop many a bus or train traveller using an iPad on the way to work, though.

However, one-handed operation of an iPad simply isn’t that comfortable. The new iPad weighs 652g, up around 50g from the iPad 2. Factor-in the extra weight of a case and you’re looking at around a kilogram of weight – enough to cause discomfort if you don’t have both hands free or forearms the size of Popeye’s.

The Kindle is easily light enough to hold one-handed – even with a robust case. According to our scales, it’s 166g. That’s half the weight of many a paperback book, and much lighter than the previous-gen Kindle, which was already light enough anyway.

Next up – software and page turning