OPINION Following the launch of a new set-top box powered by Siri, devout Apple TV fan Chris Smith welcomes the personal assistant into his life for the first time.

Siri has been around for years now and every time Apple announces a new update for iOS we “ooh” and “ah” at her growing intelligence and improving functionality. We might remark at how clever it is… and then we forget about it.

Because as good as Siri has become, it has never quite managed to permeate the day-to-day habits of most iPhone or iPad users. How many of you use it every day? How many of you are bold enough to do it in public? I’ll take a wild guess and say not many of you are raising your hands right now.

For so long a superfluous feature on iOS devices, users can quite easily go the entire life-cycle of their device without using (except by accident), Siri has now been given the responsibility of underpinning an entirely new operating system in tvOS.

And for the first time… It just feels right.

Firstly, with the new Apple TV we’ll always be in the comfort of our homes, where the self-consciousness associated with voice assistants will be non-existent.

Siri’s smarts will make it easier for us to find content thanks to the universal search capabilities that’ll end the tedium of searching each on-demand app one at a time to find something to watch. In an app centric ecosystem like tvOS, that’s essential.

“Find funny movies starring Jason Bateman,” for example, enables us the rarest of opportunities to simply find something that suits an immediate whim. When talking about revolutionising the TV experience to work around us, this is what Apple means.

“What movies can I watch with the kids,” will instantly bring up a host of selections from multiple apps, adding the caveat of “now show me the latest ones,” will likely bring up something you’ve not seen before.

Related: Apple TV 2015: Everything you need to know

It can get even more specific, enabling you to instantly find “that episode” where a certain actor shows up in a television show and make it easy to skip directly to that scene. I love that. It feels revolutionary.

One can only hope that extends to “Siri, show me the one where Del Boy falls through the bar,” if it doesn’t already! 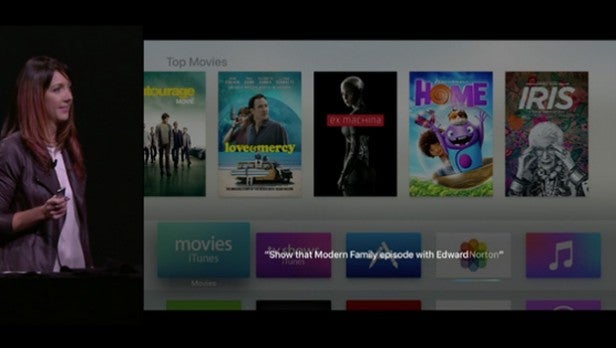 “Wait, what did she say?” which allows users to quickly cycle back a few
seconds in order to catch the line again is a genius addition that’ll
be used so many times in my house. Skipping ahead a few minutes to find favourite scenes too.

Quite often, at least in my house, picking up our smartphones permeates the viewing. We’ll check sports scores, or to find out exactly who that actress or actor is, or attempt to discover the song playing in the background.

We’ll often ask each other before looking it up, so why not just click that microphone button on the new Apple TV remote and just ask Siri instead? Playback will continue, and the information will be delivered quickly.

For me, the smartphone has no place in the TV viewing experience. Quite often we’ll miss entire plot points just because we have the intention of checking a single thing. Picking it up when watching often leads to piddling about on Twitter and Instagram or checking work emails when we’re trying to disconnect. With Siri on Apple TV we’ll be able to happily leave the iPhone in another room.

Everything dreamed up here by Apple feels like it was custom designed to eliminate the annoyances and answer the questions constantly posed when we’re watching television. 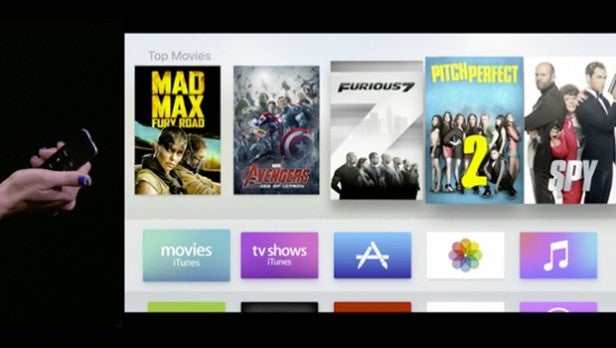 For me, the Apple TV was the highlight of the event today, and that’s even with Apple missing out the expected streaming service and compatibility for third-party gaming accessories. The Bluetooth remote looks awesome, the App Store and its games will be a fun and important addition and, as a baseball fan, the new MLB.tv app is a dream.

However, Siri stole the show.

So, welcome to my life, Siri. It’s been a while coming, but you’ve found a way in. I’ve got a feeling you’re here to stay. I apologise in advance for the next time I tell you to ‘sod off’ when my iPhone summons you by accident.