Missed the new iMac announcements? Here’s the big features you can expect from Apple’s update to its sleek desktop.

Apple has finally released the 21.5-inch iMac with 4K Retina display, as predicted. However, it’s only a single part of a sizeable overhaul for the popular all-in-one PC family.

Sweet as it was, many were left disappointed by the lack of a smaller, more affordable Retina iMac model. Now, one year on, Apple has addressed those disappointments with a revamped iMac lineup.

Apple being Apple, there are a handful of disappointments to accompany the good news.

The headline news with this year’s iMac revamp is the addition of a Retina display to the smaller 21.5-inch range. This sees a dramatic bump up from the previous 1080p resolution to a new 4096 x 2304, or 4K, standard.

While that’s not quite the same number of pixels as the 27-inch 5K model, it works out to the same pixel density thanks to the smaller screen size.

Note that this only applies to the top-end model of the 21.5-inch range – the lower two models stick with that 1080p display.

While the 21.5-inch range gets a new high-end Retina screen, the entire 27-inch range has gone high-res. It’s no longer possible to buy a sub-Retina version of the largest iMac from Apple.

It’s not cheap, but at least you know you’re getting that same super-sharp screen, which is really the main point here.

Related: Is the iPad Pro an iPad or MacBook alternative? 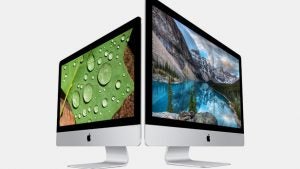 The new Retina displays across the
iMac range aren’t just sharp – they’re considerably more vibrant than
before. Yes, even more so than last year’s 5K 27-inch model.
Apple is
using an all-new variety of screen technology for the current round of
Retina iMacs, and the main benefit is that it outputs an even wider
colour gamut than before.

In fact, the new displays are capable of displaying a 25 percent greater range of colours than last year’s models.

Which brings us to one of the 21.5-inch 4K iMac’s disappointments – it doesn’t come with a discrete graphics option the way it used to.

If you want sufficient power to play high-end games and, indulge in some heavy duty 4K video editing, or output to a second 4K display, you’ll have to raise your sights to the 27-inch model.

These larger iMacs now feature sixth generation Intel Skylake CPUs and discrete AMD Radeon R9 M380 or 390 GPUs, offering plenty of graphical power. It’s just a shame you don’t even get the option of such a thing on the smaller model.

It’s now cheaper to bump the iMac’s bog standard hard drive up to a Fusion Drive. The cost is just £80 to upgrade, though it’s arguable that this should be a standard feature by now.

Arstechnica claims that this price cut has been made possible because Apple has actually made the 1TB Fusion Drive a little worse than before, with only 24GB of flash storage rather than the previous 128GB.

It means that general operation and boot-up times should still be swift, but you might notice the iMac accessing its hard drive more often for certain tasks. If that though bothers you, there’s always the 2TB Fusion Drive, which still uses the old 128GB allotment of flash storage. 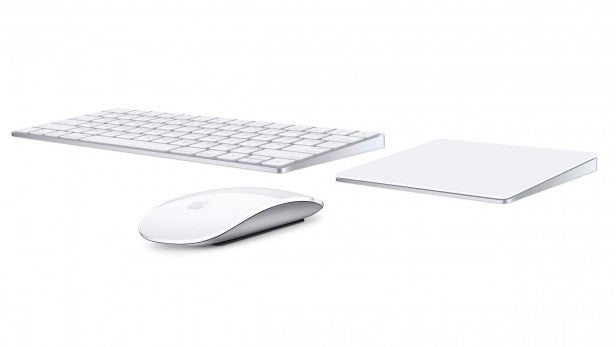 While the external design of the iMac family remains unchanged, Apple has paid significant attention to the design and configuration of its input methods.

The main difference is that the Magic Keyboard, Magic Mouse 2, and Magic Trackpad 2 now run on rechargeable rather than AA batteries. You’ll be able to juice them up using a lightning cable, and each is expected to last a month on a single charge.

What’s more, you’ll be able to get nine hours of usage from just two minutes of charging.

Elsewhere, the Magic Trackpad now follows the MacBook in supporting Force Touch inputs, as well as in the ability to click it anywhere and not just the bottom half.

The Apple Wireless Keyboard also looks very different, and is now called the Magic Keyboard. It’s now a single slab of metal, slightly angled towards the user. The keys are a little bigger than before, and they’re also reportedly shallower.

It seems as if Apple’s mouse is the input method that’s changed the least, with almost identical looks and functionality – though it’s actually a little longer than before, and Apple claims to have improved the rails on the bottom.

Both the Magic Mouse 2 and the Apple Keyboard ship with every iMac as standard, but the Magic Trackpad costs an eye-watering £109/$129 if you specify it as an extra.

Are you excited by the new iMac updates? Let us know in the comments section below.