Netflix vs LoveFilm Instant: which is best?

Netflix and LoveFilm Instant are the two best-known movie streaming services in the UK. You pay £5.99 every month and you can watch as much of the giant library of TV episodes and films on the services as you like. Many people are using platforms like Netflix to trade in their own scheduled TV watching. However, which one is better – LoveFilm or Netflix? 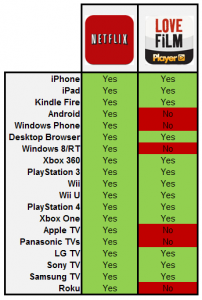 Which is available on the most platforms?

Netflix has an immediate advantage as it supports the most platforms. Indeed, it’s hard to think of a platform that Netflix doesn’t support.

LoveFilm Instant’s platform support is strong in many areas, but it has one or two serious omissions.

The worst of these is that lack of a proper Android app. LoveFilm has an Android app, but it only lets you watch trailers and manage your queue for disc delivery.

If you’re an Android phone or tablet owner, or want the absolute best compatibility possible, Netflix is the victor here.

Which is easier to use?

Netflix has a more consistent user interface than LoveFilm. Its ‘lean back’ interfaces for games console and TVs are simpler, and unlike LoveFilm, the web interface doesn’t feel completely different to the other means of using the service.

LoveFilm Instant’s issue is that it is still tied to the DVD rental that remains a key part of LoveFilm as a whole. It also feels as though less care has been put into the design of its more casual interfaces – used in games consoles and the like. It’s a bit fiddlier – although the experience of searching for a film is still the same scroll fest as it is on Netflix.

Some of you may like LoveFilm’s web-based interface as it lets you see how exactly how many films are available in each genre. But it isn’t pretty. And it is a bit dated.

Netflix vs LoveFilm Instant: Which has the better film selection?

The unfortunate truth is that the film selections on both Netflix and LoveFilm are not going to be enough to fully satisfy the needs of a true film fanatic. Neither has brand-new films and neither has a truly gargantuan library. Each has a few thousand films – including plenty of rubbish.

Both are subject to the rights negotiations that are part of any streaming service, and thanks to their sparring for top films, there’s not a massive amount of crossover between the two.  Subscribing to both services isn’t a terrible idea if you want the best streaming library on tap. Sky’s Now TV is the third part of the holy trinity, supplying some newer films than neither Netflix or LoveFilm have.

LoveFilm arguably retains a slight edge, with seemingly a little more legacy movie content than Netflix. However, it’s not quite the easy victory it was eighteen months ago. Both services get a B- for film selection.

Netflix vs LoveFilm Instant: Which has the better TV series selection?

Netflix offers a significantly better TV library than LoveFilm. It has a wealth of US TV shows in particular (and plenty of UK ones), and benefits from shows that Netflix itself has commissioned.

Taking an HBO-like approach to its commissioning, the majority of Netflix Originals shows so far have been excellent, including the remake of House of Cards, Orange is the New Black and Lillyhammer.

LoveFilm has a decent TV selection, but there are far more notable holes in its library. Navigating through the TV library is also a little trickier.

LoveFilm likes to split up seasons of shows as separate entities, while Netflix’s structure piles all seasons of an episode into a single show, making your progress in a show much easier to keep track of. Much as with the film selection, there are a few odd little gems in the
LoveFilm line-up, including lots of retro kids’ TV shows.

Netflix vs LoveFilm Instant: Which has better image quality?

Until earlier this year, it was pretty clear that Netflix offered much better picture quality than LoveFilm. It introduced HD-quality streams earlier, and higher bit-rate, 1080p ‘Super HD’ quality video. It even plans to bring 4K streams to the service next year.

LoveFilm Instant introduced HD-quality streams in 2012, but 1080p video was only available on desktops at first. However, now 1080p is also available on PS3 – it only arrived very recently.

We performed a couple of our own image quality using the desktop versions of Netflix and LoveFilm Instant to see which looks better under optimal conditions. As you might expect, the tests vary between source – and there aren’t all that many top films that are available from both services.

We went for Pixar’s Up and another Disney movie, Race to Witch Mountain. Although fairly evenly matched with HD content, Netflix tends to look sharper at times, and this seems to be particularly evident with motion. Netflix maintains a more definite impression of sharpness, which may be down to the codec and encoding practices used.

Despite being advertised as HD on the LoveFilm’s player, Race to Witch Mountain certainly doesn’t look like 1080p quality next to the sharper Netflix feed. There is some confusion here, though, as while the LoveFilm web player suggests it’s an HD film, its entry doesn’t actually have an ‘HD’ sticker on the website. 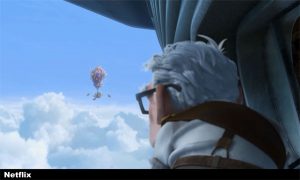 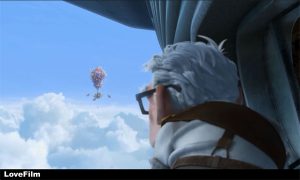 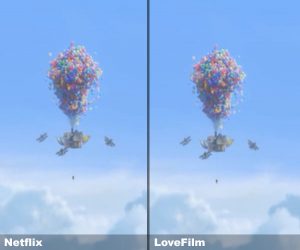 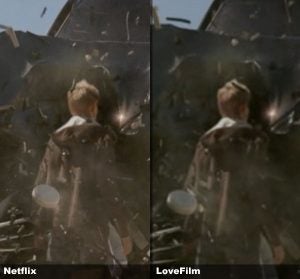 Investigating a bit further, we checked out one of the trickiest to encode scenes around – a shot of thousands of birds flying in formation, taken from the intro to BBC’s Planet Earth nature documentary. Despite looking excellent elsewhere in the video, the encoder seems to fall down when trying to reproduce this scene, turning it into mush in parts. We repeatedly played this scene to ensure LoveFilm wasn’t stepped down to a 480p stream, but Netflix continued to outperform LoveFilm.

It’s also worth noting that LoveFilm doesn’t offer its highest-quality streaming across all platforms. 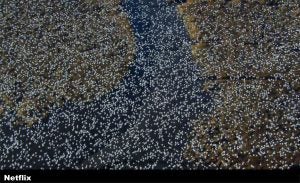 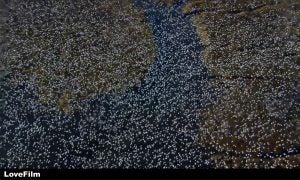 Although
not too visible in the resized images above, the pixel crop shows some
of the mushy digital artefacting that you see more in LoveFilm than
Netflix. 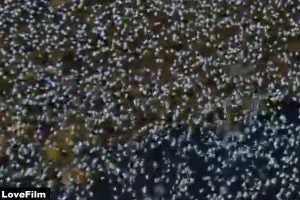 But which has the most HD-quality movies? It’s somewhat hard to tell. LoveFilm publishes its film roster (there are 2,746 films and 1,067 TV ‘items’ at the time of writing), but no longer offers a separate HD section on its website.

Netflix vs LoveFilm Instant: Which has better sound quality?

Much like picture quality, Netflix is generally ahead in sound quality. Most of its new content is delivered with 5.1 surround, and surround sound is available on game consoles, through a computer and through Apple TV.

LoveFilm does offer surround, but it’s a little behind in terms of roll-out – it has only just come to PS3. And less of the library offers surround sound, from our investigation.

The conclusion should be fairly clear by now – if you sign up for a single streaming service out of Netflix and LoveFilm, we recommend Netflix. Better cross-platform support, a better catalogue all-round and superior sound and video quality make it the clear winner. However, it’s worth considering subscribing to both if you want to make all your viewing streamed.