I’m in the unfortunate position of having my birthday fall fairly close to Christmas. As is so often the case with people like me, birthday and Christmas pressies often came rolled into one. For me, it also makes it tricky to remember which present was for which – but, regardless, there’s one birthday/Christmas present I’ll always remember: the LEGO Technic Space Shuttle 8480.

Growing up, I was a big fan of NASA and astronomy in general, with my childhood spent in an era where Space Shuttle launches were actually shown in full on the BBC News and Channel 5 news, rather than as short excerpts – or simply serving to remind us of how weird Elon Musk is with today’s launches.

The Technic Space Shuttle came out in 1996, and while that year is becoming a bit foggy with age (I do remember Mission: Impossible, The Rock, and Eraser coming out in theatres; and David Beckham scoring from the half-way line), I can still remember the feeling of unwrapping this huge box – wondering why it was so big – and the surprise of finding out it was a LEGO space shuttle.

Apparently, the rear of the box also showed another configuration of the set for a submarine – but, in my eyes, that was never an option. I mean, who wants to build a boring submarine when you can put all your time and energy into a space shuttle with main engines that glow in the dark as a result of fibre-optic lights, retractable landing gear and elevons, a version of the Canadarm, and cargo bay doors that can open and shut?! 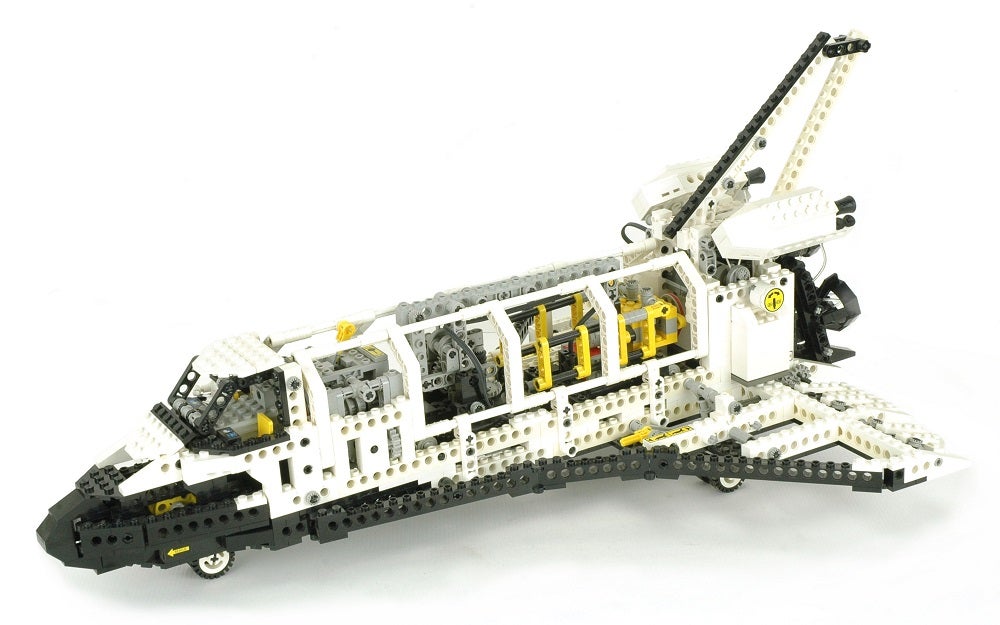 When it comes to building LEGO sets, I do find myself becoming oddly frustrated; because I want it done and I want it now! My LEGO Tumbler Batmobile remains in its box to this day (that’s a project for this year, maybe). Back then, I can remember looking at the instructions and being vaguely confused by LEGO bricks filling the container. I quite liked making a mess, so the chaos I saw before me sent my young mind racing – but I’m super-slow at putting things together.

Which is the reason I was thankful for having my big brothers to hand to help me sort things out while I was a little overwhelmed. Slowly but surely, the space shuttle came together, brick by brick; I do remember going down a few some cul-de-sacs, having to re-do bits. And while I can’t recall exactly the time it took to build, the Space Shuttle definitely wasn’t made in a day.

But when it came together, it was a thing of beauty. My only – very nerdy – disappointment was that I didn’t have an External Tank and SRBs to latch on to it. In fact, I attempted to create some out of Fairy Liquid bottles; my building skills were again quite shoddy.

It was the best kind of LEGO, one that sparked your imagination and made you even more rabid about the subject matter. The glow-in-the-dark engines saw me holding many a night-time launch, and I even conducted some “tests” to evaluate how well the wheel suspension could cope with landing. It collapsed on one occasion, so I thought better of doing it again.

Unfortunately – actually, that isn’t the right word. I should say, annoyingly I wasn’t allowed to keep it when we moved house, my family seeing it as something I was too old for. It, along with the rest of my toys were given away, a decision I couldn’t understand then and one that leaves me banging my head.

This was a classic piece of 1990s LEGO. I see some of the “cheaper” prices these days and think perhaps its worth pulling the trigger, but maybe savouring the memories is better…