2012 is set to become the year of the quad-core smartphone, the first out of the gate having just been revealed at Mobile World Congress in Barcelona. The Samsung Galaxy S3, which will almost certainly be the best-selling of the lot, is not among them, but HTC, Huawei, LG and ZTE have all unveiled quad-core would-be champions. Enter the HTC One X, Huawei Ascend D Quad, LG Optimus 4X HD and ZTE Era.

Here are the four quad-core phones we’ve seen at Mobile World Congress 2012. The larger HTC One X, LG Optimus 4X HD and Huawei Ascend D Quad all have plastic bodies, but the smaller, slimmer ZTE Era has a metal frame. All of them use a toughened glass front on their capacitive screens, though. 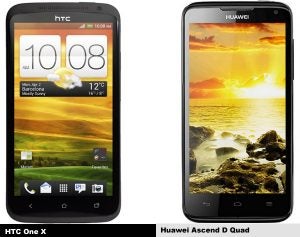 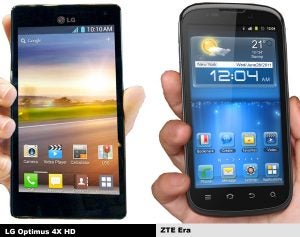 A quad-core processor marks out all these phones as high-end devices. Hence, they’re not going to be cheap and they all have fairly large screens. However, there is a stand-out among them, dipping below the rest in several respects. 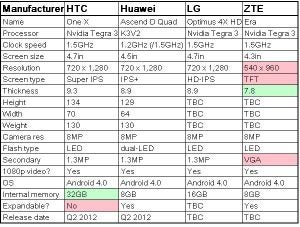 The ZTE Era is the arguably lowest-end of the lot, featuring a qHD screen instead of a 720p model like the rest of the quad-core CPU team. However, as the screen is just 4.3in rather than 4.5in or 4.7in, this is enough to keep the screen looking pin-sharp with 256dpi pixel density.

If you’re a “retina display” junkie, though, the other three phones are better bets, offering at least 300 dpi. The Huawei Ascend D Quad is most pixel-packed of the lot thanks to its slightly smaller display. With 326dpi, its screen is as sharp as the iPhone 4S’s, and much larger.

What’s more significant than the pixel density is the display type. Again, the ZTE loses out with a TFT LCD screen while the others all use forms of the IPS display seen in the iPhone and iPad. This gives more faithful colours than AMOLED, and provides good contrast and excellent viewing angles.

Who wins? Not the ZTE, but the rest are evenly-matched. If you want the biggest screen possible, the HTC One X and LG Optimus 4X HD both use 4.7in displays, but many of you may find the 4.5in screen of the Huawei Ascend D Quad easier to live with.

These four phones all use quad-core processors, but that doesn’t mean they’re equal in power. Three of them are – the HTC One X, LG Optimus 4X HD and ZTE Era all use the Tegra 3 processor – but the Huawei Ascend D Quad breaks away with its own Huawei-designed K3V2 chip.

It uses a Cortex A9-based architecture, but then so does the Nvidia Tegra 3. Huawei claims its chip provides twice the graphical performance, is 49 per cent faster in CPU-intensive tasks and uses 30 per cent less power than its competitors. The K3V2 comes in two flavours, 1.2GHz and 1.5GHz, while the Tegra 3 clocks in at 1.5GHz.

Is Huawei just bigging-up its own product? We’ll find out once we get these new-generation phones in to review.

Android phones that don’t offer microSD memory card slots are becoming more common. It’s a distressing iPhone-emulating trend, and one that appears in this next generation of top-end phones.

The HTC One X has an impressive 32GB of internal memory, but has no microSD card slot. Both the Huawei Ascend D Quad and ZTE Era do have expandable memory, but don’t have anywhere near as much internal storage – just 8GB each. In the middle ground, the LG Optimus 4X HD comes with 16GB of internal storage, but whether the phone will ship with a slot or not is currently unknown.

Which is the best? It’s a case of personal preference on this one. Being able to swap out big chunks of data on a microSD card is handy, but plenty of smartphone users simply don’t need this sort of flexibility.

None of these cameras offer exceptional cameras. With eight megapixels a piece, they keep up with the smartphone top-end Joneses without casting too much of a spotlight on their photographic skills. The Huawei features a dual-LED flash rather than a single, but this isn’t enough to persuade all that many people to buy. The ZTE Era does have a significantly worse user-facing camera, though, with VGA resolution while the others all have 1.3-megapixel user-facing models. If you’re a keen video chatter, this is worth taking into account.

To combat this problem, Huawei has taken a different approach. Its standard Ascend D Quad uses a normal-sized 1800mAh battery, but there’s also an XL edition that uses a 2500mAh li-on model and is a mite thicker. Huawei says it will last for two or three days rather than the smartphone standard of 1-2.

Once again sitting in the middle is the LG Optimus 4X HD. It uses a 2150mAh unit, which should last a solid two days. However, battery performance is reliant on how efficient both hardware and software are, so the case will remain open until we get these quad-core wonders in to review.

The swankiest of the newly-unveiled quad-core phones is the HTC One X. It has the most internal memory, but does suffer from the recent trend of leaving out the memory card slot in top-end Android phones. This alone will be enough to put some people off. The HTC One X is also the chunkiest of the lot, at 9.3mm.

The stand-out, though, is the ZTE Era – if not in an entirely positive way. Its screen is smaller, uses a lower-quality display, the body uses a metallic backplate and is a wafer-like 7.8mm thin. If this model offers all the power of the rest for significantly less outlay, it could prove to be a tasty option for phone fans not tempted by the Samsung Galaxy S3.