OPINION: Computing Editor Ed Chester gives the Motorsport Simulators F1 Simulator a run for its money alongside some of the F1 greats.

For true fans of motor racing the pursuit of the ultimate virtual driving experience can be never ending. From the host of gaming accessories
you can buy to augment your PC or console, to dedicating whole rooms to
the simulation experience, there are many ways to splash your cash.

But
what if you just want to jump straight to the top of the pile? After
all, Formula 1 teams use simulators to train their drivers – could you own one of those?

Well, it turns out you can.

Motorsport Simulators
is a UK-based company that makes, rents and sells a range of simulators that it also supplies to some
Formula 1 teams (the company isn’t allowed to say who).

With that
sort of pedigree I wasn’t going to pass up a recent opportunity to try
out one of these high-tech machines at a promo event for the upcoming Race of Champions. 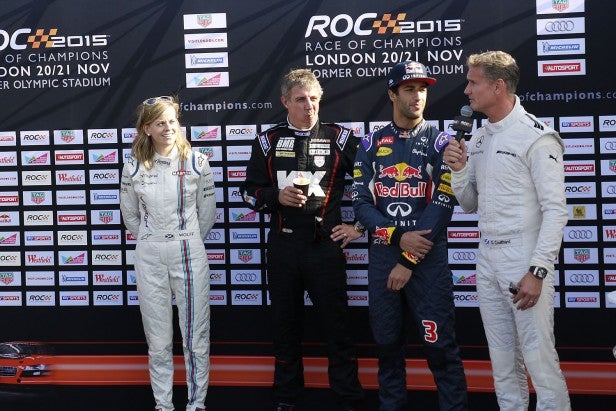 If
you’ve not heard of the Race of Champions, it’s a fun annual two day
event that pits famous racers from all manner of disciplines to race
each other in a variety of different cars, with the winner crowned the
champion of champions. This year’s event is taking place from 21 – 22
November 2015 at the London Olympic arena.

The event was attended by some of the F1 greats, including the likes of Daniel Ricciardo and Jason Plato, who both put the simulator through its paces. The pair were responsible for setting the early pace for us lowly
journalists to then try and emulate – no prizes for guessing if any of
us got close.

But the first challenge was just getting in the thing.

Being based on a proper F1-style chassis, Motorsport
Simulators machines have the same confined cabin and leg space as the real thing. As such, it’s no mean feat sliding the likes of my six-foot plus frame into one. In fact, getting back out I swear I pulled a thigh
muscle.

The version I tried included only the front end of the car, without wheels, and the chassis itself stayed put. In contrast, the top-end versions use a whole car, with wheels, and the whole thing moves about in response to what’s happening on screen.

You can also opt for a seat/seatbelt combination that pushes against your body to further provide a sense of the G-forces involved in driving.

Instead, what this lower-end model includes is a high-spec, carbon-fibre, force-feedback wheel and pedals, as well as a massive wraparound projector screen and a trio of projectors (you can also opt for one or three monitor screens instead). There are also two massive speakers that side either side of
you in the seat. So, not quite the full-blown experience, but an interesting one nonetheless. 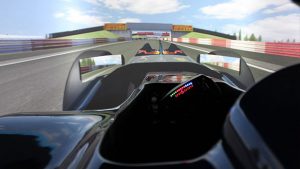 The simulator
software is based on the relatively old but well known rFactor, which doesn’t
have the stunning visuals of cutting edge racing games. Instead its
focus is on simulation accuracy, with tire pressure, aerodynamics and all manner
of other factors modelled and accounted for.

In fact that’s
precisely what company director Patrick Ward was aiming for when he
created the business six years ago. As he put it, “we’re not in the
gaming industry, we’re in the simulation industry”.

Behind
the scenes the system runs on a fairly conventional PC, albeit one
powered by a hefty Intel Core i7 processor and a pair of high-end Nvidia
graphics cards. Crucially the system needs to run three displays at the
same time, with custom software marrying them together, so even though
the graphics aren’t too taxing there’s still a lot of work for the cards
to do.

The overall effect is a thoroughly absorbing and
addictive experience. Driving with the simulator set to Formula 3 mode, I completed around a dozen laps of Silverstone but could quite happily have driven all afternoon, slowly perfecting my
driving skills and learning the track in ever more detail.

It’s
particularly addictive having the kind of quality of steering wheel used
here, both in terms of its carbon-fibre construction and attention to
detail of all its buttons, the gear-change readout and of course the force feedback it provides. Every
change in road surface and load on the wheels is accounted for and the force
applied is quite something – this is a far cry from your average desktop
force-feedback wheel such as the Logitech G29. 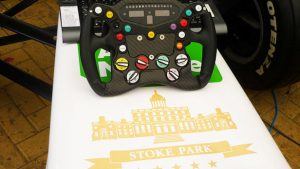 Not that the whole experience is remotely what
you’d call easy. Of the dozen or so laps I completed, I only managed
two or three without going off the track or spinning. But that’s
precisely what makes it so addictive as driving at those limits makes
you learn fast, and quickly gets you throwing out your bad habits.
Breaking while turning in? A big no-no. Changing gear while under high
lateral loads? Not the best plan.

In truth, though, without some
sort of physical feedback to give a sense of acceleration and
deceleration – such as provided by the full-size systems – the sense of
realism isn’t quite what it could be. 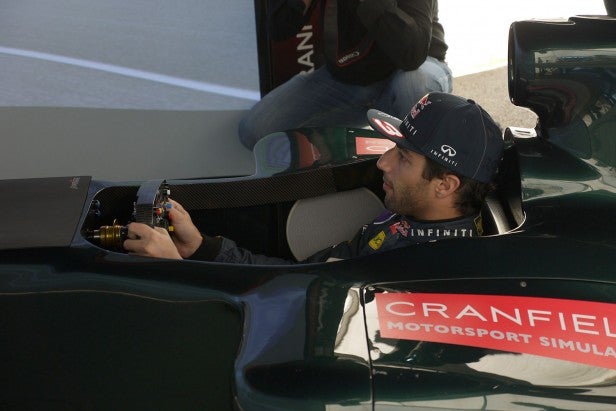 This was particularly noticeable
when braking at high speed, where it can be difficult to not only get a
sense of what speed you’re doing but how much brake force you’re
applying and just how close to the limits of grip the car is.

As
such, if I’m ever lucky enough to be in the position to splash the cash
on one of these systems I’d jump straight to one of the higher spec systems with the reactive seat and chassis,
and I’d maybe fit a speed-controlled fan to blast 200mph air at me as well. 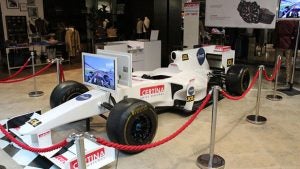 Could you get close to the same
experience building the system yourself? Well, you could certainly put
together the PC, software, display system and audio easily enough but
getting the quality of chassis, steering wheel and pedals is much more
of a challenge, let alone trying to do the full-motion systems yourself.

A number of other companies offer similar simulator experiences, though few offer quite the combination of the full car chassis, car and seat-motion and the ability to actually buy them.

For instance, CXCSimulations offers the full-motion experience but not inside a mock chassis, while a host of other companies offer similar non-motion systems centred around a racing seat with a frame to mount a wheel, pedals and screen onto.

There’s also the likes of Let’s Race, The Race Simulator and Simulator Driver Challenge that offer short experiences using similar kit to Motorsport Simulators, but they don’t offer the opportunity to buy the devices.

As for those lap times, I don’t think
I’ll be taking Daniel Ricciardo’s F1 seat any time soon. While him and
Jason Plato battled it out in the 53s region, I was hovering around 59s. Sounds like a good excuse for me to get saving…