One of our favourite phones of the last 18 months is the Nexus 4. However, now that it is over a year old, is it still one of the best Androids around?

There’s a new budget contender on the scene, which seems to offer similar specs for around £100. It’s the Motorola Moto G. Let’s find out whether that new phone is really as good as the Nexus 4.

What’s better about the Moto G?

It’s cheaper, and easier to get hold of
Google has officially discontinued the Nexus 4. You can’t buy it from the Google Play devices store anymore, now that the Nexus 5 is available. Most retailers don’t have new Nexus 4s, and the prices are still riding pretty high on eBay. You’re looking at around £200 for a used one.

The Moto G is cheaper and much more commonly-available in stores. It sells for as little as £100 for the 8GB edition, although the best deals still sell out pretty quickly. We thought the Nexus 4 was a bit of a bargain at launch, but the way it has managed to hold its price over the last year means the Moto G is simply in another league value-wise.

You can customise it with cases
The Moto G uses a removable rear cover. Motorola offers a bunch of its own covers – and there are three main types. There’s the basic plastic cover, which comes in an array of finishes, one with an inbuilt flip cover and a third that has rubbery edges for a bit of extra protection. You get no such customisation with a Nexus 4. The back and front are covered with glass, and you have no access to the phone’s insides.

Colour reproduction is better on the Moto G
The Nexus 4 has a great screen in most respects. However, its colour calibration is not great. To our eyes, the Moto G looks marginally better colour-wise, although the Nexus offers better contrast.

However, there are some slight variations between Nexus 4s – Google seems to have altered the screen a little in later batches, leading to a slightly different colour temperature.

The Moto G has an FM radio
We’re occasionally ridiculed for mentioning whether a phone has an FM radio or not. But for the sake of completeness – the Moto G has one, the Nexus 4 does not. If you have a contract with a healthy data plan, it doesn’t matter really, but there are at least a handful of people who still like to listen to radio the old fashioned way. Like almost every mobile FM radio, the Moto G’s uses the headphones cable as an antenna. 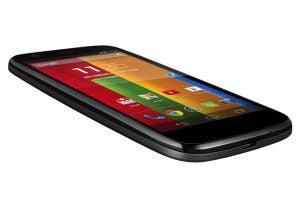 What’s better about the Nexus 4?

The Nexus has a slightly larger screen
The Nexus 4 has an extra 0.2 inches of diagonal screen space, with a 4.7-inch display instead of a 4.5-inch one like the Moto G. It’s not a great difference, but is a bonus if you want to use your phone as a mini video player.

They both use the same screen resolution, 720p, which means that the Moto G is a tiny bit sharper. However, the two phones are easily sharp enough to make this a non-issue.

In the Geekbench benchmark, the Moto G scores 1,155 points, while the Nexus 4 manages about 2200. It’s much more powerful.

The Nexus 4 will get updates slightly quicker
The Nexus 4 is a ‘pure’ Android device. Nexus devices are the first to get Android updates, and the Nexus 4 already has Android 4.4 KitKat. Motorola is working on bringing the update to the Moto G, but it’s not due to arrive until early 2014.

The Moto G uses a near-vanilla version of Android, but there are a couple of optimisations that’ll mean you need to wait a little while before you’ll get the latest and greatest versions of the OS. These include a different camera app, and a few extra features such as Motorola Assist.

The Nexus 4 has a higher-resolution camera
Neither of these phones has a particularly great camera. The Motorola Moto G uses a basic 5-megapixel sensor and the Nexus 4 a generally uninspiring 8-megapixel sensor.

The Motorola Moto G can produce some reasonable images using its inbuilt HDR mode, but it’s pretty slow to use and is useless for taking shots of fast action. This is a fight the Nexus 4 wins, but not by a huge margin.

No NFC for the Moto G
In order to cut costs, there are a few core features of the Nexus 4 that are completely absent from the Moto G. This means no wireless payments using your mobile, and no easy sync’ing with NFC-capable headphones and docks. It’s not a great loss, especially given NFC hasn’t really taken off in the way some hoped it would a few years ago. 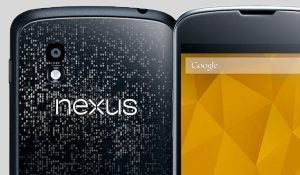 As fantastic as it is, the Motorola Moto G is not a magic phone. Some compromises have been made to get it down to its £100-ish price. The Nexus has a slightly better camera, technically-speaking, it has a few more features and a good deal more raw power. However, the Moto G is better value for most people.

Next, read our round-up of the best cheap phones