Motorola has pretty much dominated the affordable phone market in recent years, at least here in the West. With a new Moto G announced, we thought we’d examine how it stacks up to the company’s current entry point, 2015’s Moto E2.

With no 2016 Moto E refresh on the cards, the three-pronged 2016 Moto G launch represents the company’s whole entry-level line-up for the year.

Which makes a comparison between the Moto G4 and the Moto E2 quite pertinent.

So, how do the Moto G4 and the Moto E2 stack up to one another?

Some have commented that the Moto G4 has lost touch with one of the key aspects of the original 2013 Moto G – a smaller, more manageable screen that can be readily wielded with one hand. In that respect, the Moto E2 is far more of a spiritual successor.

However, the Moto G4’s screen is also significantly sharper than the Moto E2’s at 1080p versus 520 x 960. Of course, it can be hard to figure out the exact difference in sharpness with such a difference in screen size, but allow us to expand.

While the Moto E2’s screen manages 245 ppi (pixels per inch), the Moto G4’s screen hits 401 ppi. In other words, the newer phone is way sharper. 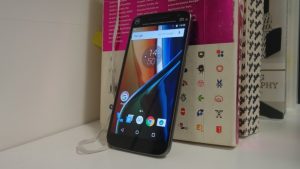 Along with the Moto G4’s bigger display comes bigger performance, courtesy of a Qualcomm Snapdragon 617 CPU. That’s a 2016 mid-range component.

The Moto E2, meanwhile, runs on a Snapdragon 410 – a lower-mid-range chip from 2015. The performance difference isn’t seismic, but it is notable.

Also, the newer chip utilises a big.LITTLE architecture, making it more energy efficient. But more on that later.

Also worth noting is that the Moto G4 has double the RAM of the Moto E2. While the latter is stuck with a somewhat inadequate 1GB, the newer phone has much more head-room with 2GB.

Moto G vs Moto E: Much more storage space with the Moto G4

Modern entry-level phones can be highly capable performers, so the best ones often don’t feel markedly inferior to your average mid-range or flagship phone.

Yes, that can be expanded with a microSD card, but it’s only really with the recent upgrade to Android Marshmallow and its Adoptable Storage feature that this has actually proved genuinely helpful.

Overall, there’s no substitute for internal storage, and the Moto G4 has double the amount at 16GB. That’s still hardly a lot, but it’s a significant wedge more. It means you won’t need to turn to your microSD card immediately after set-up, at least, and you also get that microSD expansion option.

It’s also worth noting that the Moto G4 comes with Android Marshmallow pre-installed, so Adoptable Storage is a standard feature with the Moto G4. 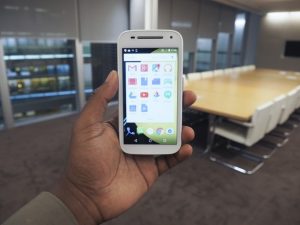 Moto cameras have never been the best, with last year’s premium Moto X range somewhat belatedly presenting a decent photographic experience. As for the lower Moto G and E ranges, well, they’ve been adequate at best.

The Moto G4 looks set to change that perception. It packs a 13-megapixel sensor, an f/2.2 aperture, and an 84-degree wide-angle lens.

In our limited time with the handset we found it to be fast to load, fast to focus, and fast to shoot. Which is all you can ask of an entry-level phone, really.

It’s safe to say even at this early point that the Moto G4 beats the Moto E2 hands-down in the camera department. The older phone has a 5-megapixel sensor, which seems like something of a throw-back to years past.

Given the low price of the phone, it’s a pretty respectable effort. But its shots are inconsistent, and it struggles with movement and low light.

The Moto G4 is also much better at video capture. While it can grab 1080p Full HD footage, the Moto E2 is stuck with 720p.

Meanwhile, in the front-facing camera stakes, the difference looks to be even more pronounced. While the Moto E2 has a barely-adequate 0.3-megapixel (VGA) example, the Moto G4 offers a much more selfie-savvy 5-megapixel number.

Modern smartphone performance has hit a bit of a plateau, with even fairly low-end phones doing everything you need of them pretty well. As such, one stand-out feature we look for (alongside camera performance) is battery life.

The Moto E2 was a true champ in this regard, offering a good two and a half days of usage from its humble 2390mAh battery. Its stamina is truly impressive.

Will the Moto G4 be able to match this performance? With that 5.5-inch 1080p display, it’s a tough ask. However, it looks well equipped for the task with a 3,000mAh battery. That’s the kind of battery capacity you see in flagship phones with super-fast processors and 2K displays, such as the Samsung Galaxy S7 and the HTC 10.

The Moto G4 also benefits from Turbo Charging. We loved this high-end feature in last year’s Moto X Style, and we expect to love it here too. It promises to provide six hours of use from a mere 15-minute charge – though you’ll need to provide your own Turbo Charger cable. 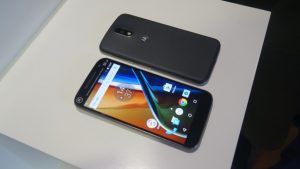 On paper and based on our early hands-on impressions, there really is no contest here in terms of pure performance. The Moto G4 is a generation and a class above the Moto E2, and the difference shows.

It’s got a bigger, sharper display, a faster processor, and a better camera.

However, it’s also a lot bigger than the Moto E2. Many feel that this is going against what the original Moto G stood for – namely a well-balanced single-handed experience.

Perhaps more importantly, the Moto G4 is going to retail for more than double the price of the Moto E2. The Moto G range is creeping up in price, while the Moto E2 is headed in the opposite direction as it ages.

Really, then, while the Moto G4 is the better and more future-proof phone, the two aren’t really competing for the same market. While the Moto E2 is fighting against obsolescence the Moto G4 faces the equally tricky task of fending off the well-equipped Chinese phones retailing for similar prices.