Monolith’s Middle-Earth: Shadow of War is a huge game with many interconnected systems and plenty of esoteric touches. For the player that means two things. One: the chance to direct both large-scale cinematic battles between hundreds of units and one-on-one melee scraps with tremendous depth, and two: a befuddling couple of hours at the start being buried underneath pop-up hints and menus while the game explains itself.

That’s why we’ve put together this guide to take the sting out of your assault on Sauron, and make sense of Shadow of War’s many parts.

How to save your game Middle-Earth: Shadow of War

Yep, we’re starting with the basics – or so it might seem. You see, there’s no manual save option and no quicksave function either. Instead your progress is banked when the game deigns to autosave, and for a game set in a map teeming with Orcs who’d all very much like to kill you, that’s a bit nerve-jarring. 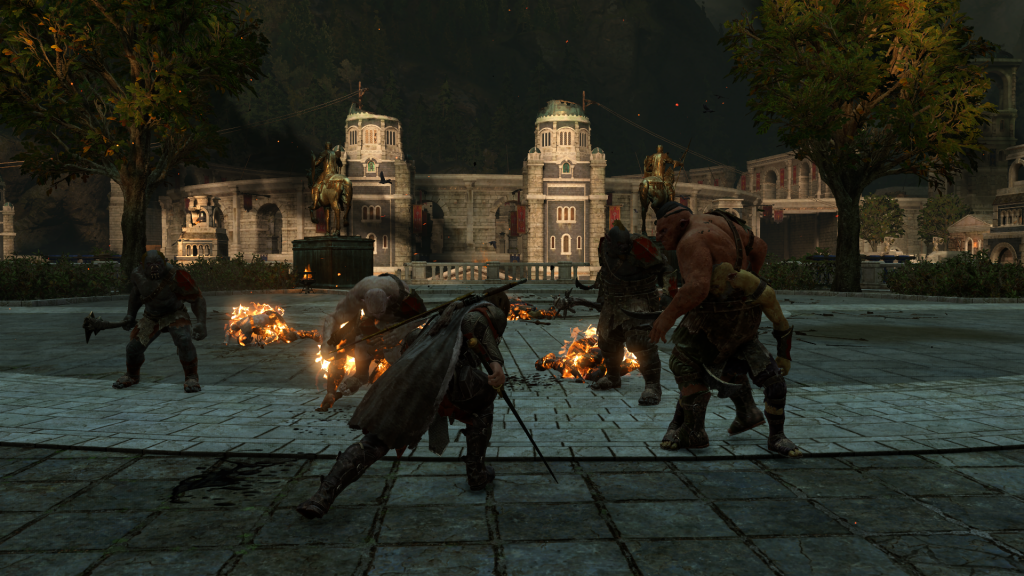 However, there’s a way to force its hand: just fast-travel. The game autosaves whenever you do this, so if you’ve just bested a particularly obnoxious nemesis and never want to see them again, fast-travel from one region to another on the map and you’ll save at that point.

How to upgrade Talion (the easy way)

Talion had a few skill trees in Shadow of Mordor, but the equivalent menu in Shadow of War has more trees than Lothlórien. It’s a bit daunting.

Here’s how it works: Talion has a skill tree which expands and upgrades his abilities. Separate to that is the gear he carries in his inventory, which can itself be upgraded with Gems and Unlock Challenges.

Focussing first on the skill tree, you’ll see a swathe of abilities which each have several sub-abilities. For example, the Execution skill has Grim Resolve, Secret Might, and Fatal Might sub-skills, but you can only play with one of these activated at a time. Therefore, it’s best not to spend skill points on more than one sub-skill for each main skill. 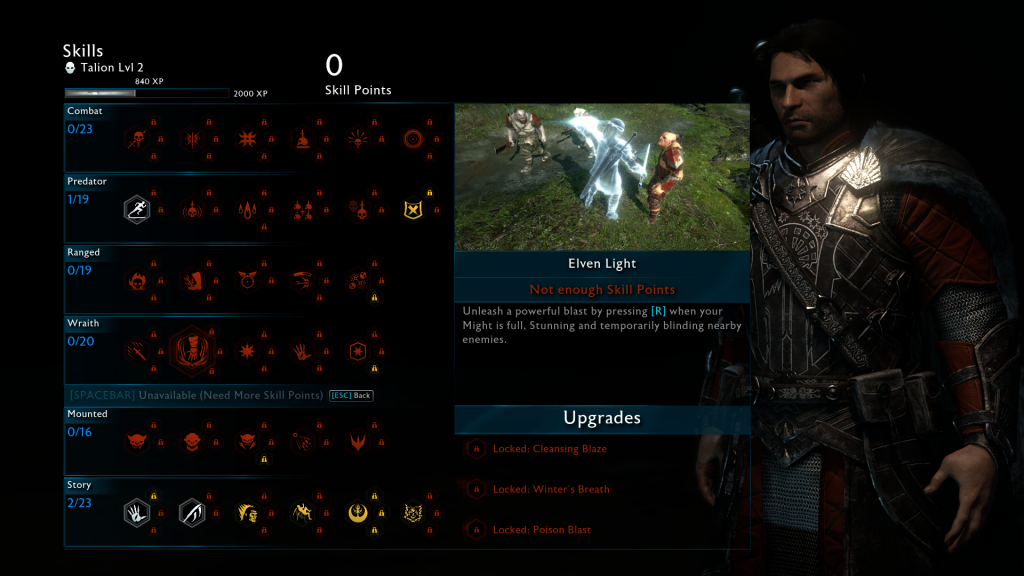 Then there’s the inventory system. As Talion finds and equips new gear in the field, Gems can be used to add potency, vitality or wealth to a particular item. Damage, health, and money, in other words. Both gear and Gems are dropped by enemies and must be collected manually mid-battle, which can be confusing at first. Finally there’s rare gear which comes with an Unlock Challenge. Equip a particular sword and kill so many Uruks in a particular fashion, and you’ll unlock improved stats for that item.

So what’s the easiest way to go about getting skill points? Nemesis and Vendetta missions will gain you points, but far and away the simplest method is purifying Haedir Towers in each region.

The best upgrades to buy early in Shadow of War

It might seem counterintuitive if you’re getting your dead behind handed to you in hand-to-hand combat, but spending skill points on Wraith abilities rather than melee will help you out in the early game. It’s great for crowd control: Elven Light pushes nearby foes back and blinds them, while Ice Storm lives up to its name by freezing Orcs in front of you.

Using these abilities in tandem will ensure you always have a way out of an increasingly tricky battle, and upgrading both those skills will get you through into the mid-game without having made too many Nemeses.

Glancing at the world map in Shadow of War can sometimes look as though an Assassin’s Creed level designer sneezed over a copy of Lord of the Rings: Ithildin symbols, Shelob memories, Gondorian artifacts, Haedir Towers… crikey, that’s a lot of icons. 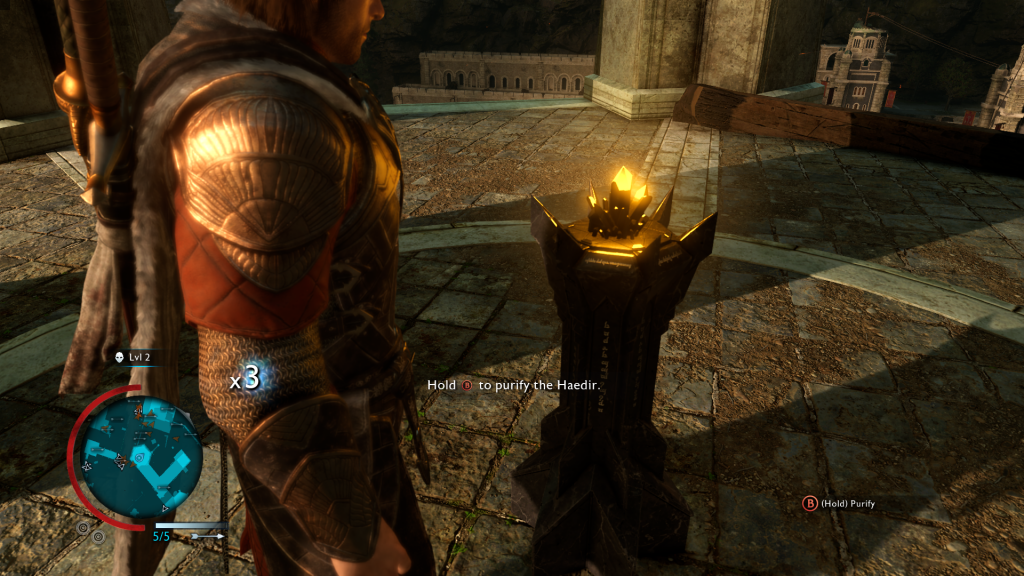 But what do they all do? Let’s break it down:

How to kill Orc Captains in Shadow of War

At one and the same time the most inspired and most maddening aspect of the series, fighting high-ranking Orc officers is always a big event. Interrogating a Worm (look for green icons on your minimap) is a good way to gain intel on each Captain’s weaknesses, and this intel really must be acted upon. Particularly later in the game, your Nemesis may have so many invulnerabilities to certain attack types from the start that being defeated by him just once makes him nearly unbeatable. So do yourself a favour and use fire if your intel tells you to.

But there’s more: you can make any fight much easier by thinning out the numbers using environmental hazards. Chances are, your target will be surrounded by caged Caragors, hanging meat, Ghul eggs, fire pits or captive Graugs. Possibly even several of the above. Unleash these on the masses and increase your chances of fighting a Nemesis at something close to 1v1 combat. 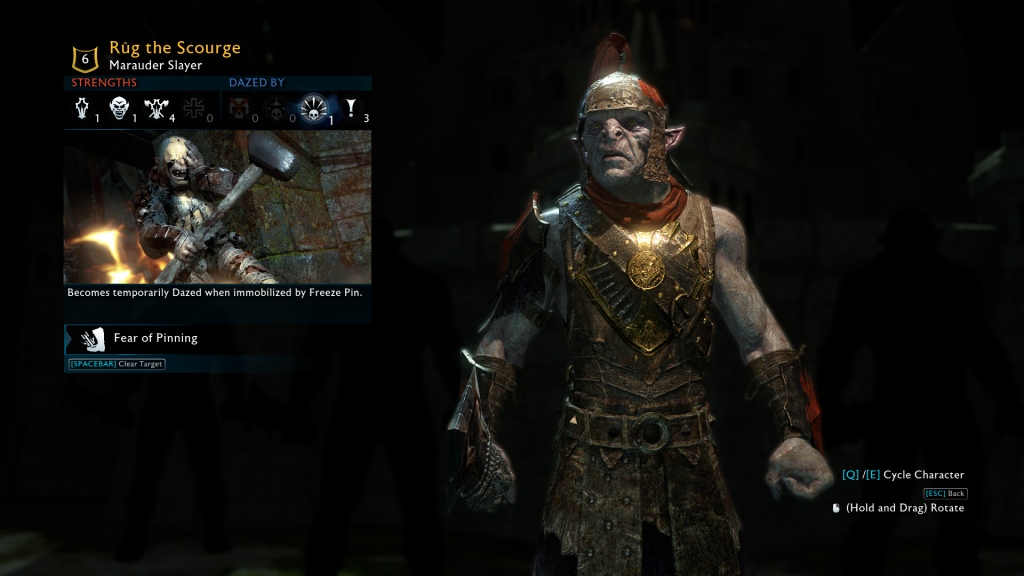 Fighting can be deceptively tricky in Shadow of War, particularly if you don’t have hours of Shadow of Mordor to call upon for experience. Or, let’s face it, the Arkham games. The enemy AI will let you get away with button-mashing, up to a point: once you miss that first counter (look for the icon above and enemy’s head as time slows slightly) you’re vulnerable to attacks for a prolonged period, and there’s very little you can do about it. Therefore, act on seeing a counter prompt immediately. It’s tempting to think you’ll get away with one more hit, or be able to move away from the hit without having to counter, but trust us: it’s not worth the risk.

Once you get into the habit of countering right away, it’s worth spending a skill point on the Perfect Counter Ability. For a very brief window when the counter prompt appears in blue, performing a counter will kill low-ranking enemies instantly. Used with the Wraith abilities mentioned above, you’re always able to control the crowd.

And if it does all go wrong, don’t forget to run away. It is a viable option, and the enemy AI seems designed to be a bit lenient if you do decide to flee. It certainly beats dying in the battlefield and making some Orc upstart a Captain, that’s for sure.

Those are our best steers to get you through the early game, but half the fun of a game this big and complex is the ability to forge your own path. Go and experiment, and find out what works for you.