Microsoft Surface Studio vs iMac (2017): Which is the best AIO? We take a closer look to see if we can’t answer that very question.

Apple introduced a new line of iMacs at this year’s WWDC, and they come packing Intel’s latest Kaby Lake processors, making them even more tempting an offer. The company also gave us a sneak peek at the upcoming iMac Pro – though that won’t launch until later this year and comes with some frankly ridiculous (in the best way possible) hardware.

But the Surface Studio, Microsoft’s long-awaited all-in-one PC alternative to Apple’s iMac, is set to provide some stiff competition. To date no Windows AIO has managed to get close to toppling the mighty iMac. Most people couldn’t even name a Windows computer of this type.

That’s about to change, but how does the Microsoft Surface Studio compare to Apple’s most desirable desktop, now that the latter has become even more desirable?

Here are our early thoughts on how the Surface Studio stacks up the iMac (excluding the yet-to-be-released iMac Pro).

There are several different versions of the iMac. Screen sizes start at 21.5 inches, resolutions at 1080p. However, the model closest to the Surface Studio is the 27-inch 5K iMac.

That said, all iMac models bear the classic glass and metal design Apple has used for years. 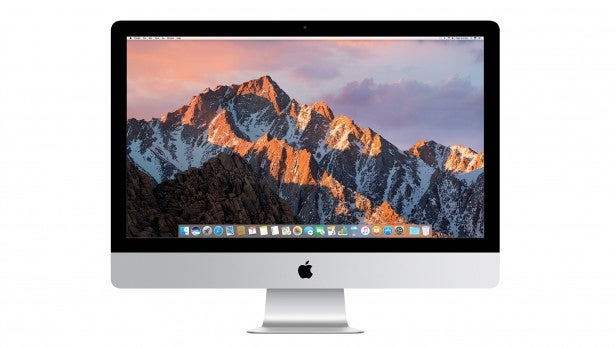 It looks great and is slim, but there’s a fairly hefty metal “lip” on all models of the iMac. This matches the metal stand for an instantly recognisable look. See an iMac in a movie and you’ll know what it is, even if they block out the Apple logo.

The Microsoft Surface Studio has less character to its design, but perhaps a more modern look as a result. By fitting all the components into the base rather than behind the display, Microsoft has managed the screen itself incredibly slim. Apple manages to make the iMac look skinny in pictures, but it actually bulges out significantly towards the centre. 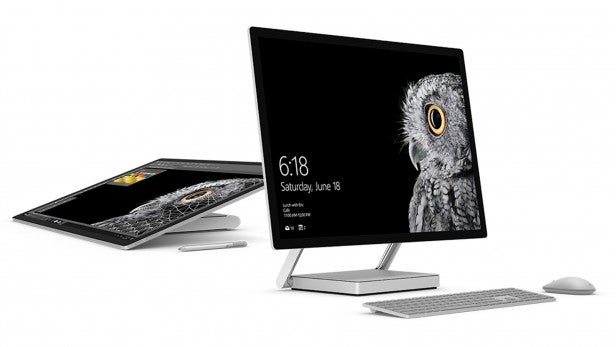 At just 12.5mm thick, the Surface Studio display looks more like a tablet than a computer monitor. That’s somewhat apt too, as unlike the iMac the Studio has a touchscreen.

The machine’s casing is all-aluminium, and two chrome metal bars join screen to base, where the brains live.

What we see here are two totally different approaches to designing an AiO. Microsoft’s is much less like a traditional desktop PC, as the hinge display stand allows it to fold almost flat, letting you approach it like a gigantic tablet if you like. The iMac just tilts a little. It’s a much stiffer design.

Like other AiOs, the Surface Studio and iMac don’t have a mind-bending array of connections, but both offer enough for most people, including the pros.

The iMac has a Gigabit Ethernet socket, four USB 3.0s and two Thunderbolt 3 (USB C) ports on the rear, alongside a SDXC card slot and a headphone jack.

The Surface Studio has four USB 3.0s, a mini DisplayPort, audio jack and an SDXC card slot. They all sit on the back edge of the base.

Other iMac features include a pair of fairly good down-firing speakers hidden away in the back, and an HD FaceTime 1.2-megapixel camera at the top of the screen for video calling. The studio has a “2.1” speaker array, meaning it has two main drivers and a bass one, and an HD webcam that supports Windows Hello. This new-ish feature lets you sign into Windows with your face, rather than a password.

On the display side, Apple offers several iMac display options. The base-level iMac has a 21.5-inch Full HD screen. Moving up the series, the Retina version comes with a 21.5-inch 4K screen and the ability to support up to 4,096 x 2,304 pixels on an external display. 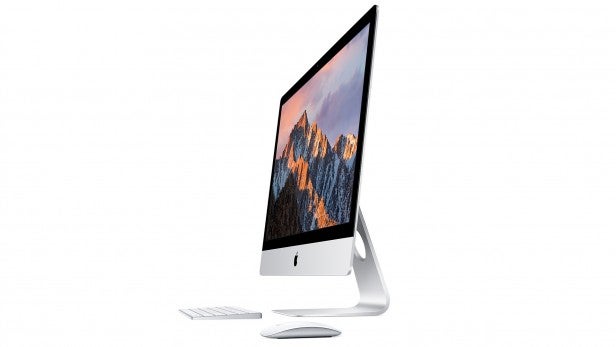 Microsoft’s Surface Studio resolution is slightly lower, but still liable to blow the minds of those who haven’t used a PC like this before. It’s a 192ppi, 3:2 aspect display of 28 inches across, its resolution 4500 x 3000 pixels. It has a squatter aspect than the iMac.

Resolution is not the most important factor for many pros, though. Colour accuracy is.

We won’t know quite how well the Surface Studio will fare in a colorimeter test yet, but at the launch Microsoft showed the computer hot-swapping between sRGB and DCI P3 colour standards. That there was no explicit mention of the Adobe RGB, which digs deeper into the red spectrum, suggests it might not be able to hit 100 per cent of that standard. But then neither can the 5K iMac, or many monitors under £1000.

Both machines use LCD displays with 10-bit colour. But Apple upgraded the iMac’s display for 2017, and though the resolution remained the same as previous models, the display has been generally improved with 1 billion colours and 500 nits of brightness, making for a screen that’s 43% brighter than the previous version of the iMac. 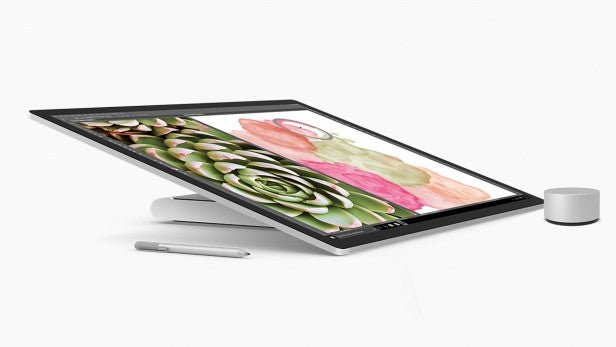 The Microsoft Surface Studio display also has a completely different side the iMac doesn’t even touch. Part of the justification for the touchscreen and the weird-looking hinge is that the display can be laid almost flat, to 20 degrees, turned into a creative drawing surface.

As well as a touchscreen, there’s a Studio pen that lets you treat the display a little like a Wacom graphics tablet, although Microsoft hasn’t yet talked about its pressure sensitivity. For a guide, the Surface Pro 4’s pen offers 1,024 levels: not bad at all.

There’s also a radial controller that you stick on the screen to let you alter certain settings without having to take pen away from the surface with supported apps. Microsoft showed-off comparable ‘object recognition’ in the original Surface Table from years ago. One demo of the Surface Dial was an artist using it to roll back changes in a drawing.

Creative professional are often prone to droning on about how much they love their Macs, but the Surface Studio is starting to look like a good reason to switch over.

Need more? Palm rejection support is in and the pen seems to offer (near) zero-lag input that sounds similar to that of the iPad Pro. 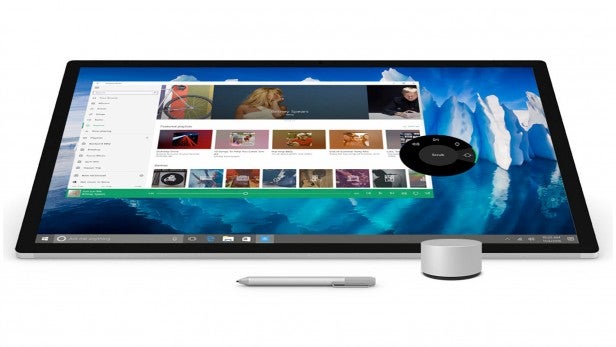 There are many variants of iMac, as you’d expect for a family that has been around for almost 20 years. Let’s concentrate on the comparison that matters, what you get for the same $3000 the Surface Studio will cost.

At $3000 Microsoft’s specs are much lower: an older Skylake Intel Core i5, 8GB RAM, a 1TB hybrid drive and an Nvidia GeForce GTX965M CPU. 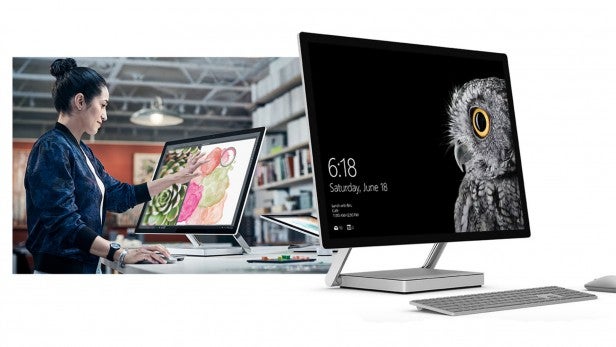 Apple’s top spec costs $5428, but is a little different with a faster 2TB SSD instead of a hybrid drive and a AMD Radeon Pro 580 GPU. The company made a big deal out of its new iMac range being capable of running VR thanks to the graphical upgrades.

However, Microsoft’s use of last-gen graphics cards is quite disappointing. These days fairly conventional gaming laptops manage to fit in much more powerful GTX1070 and GTX1080 cards.

Apple’s spec configs are more malleable, but here’s how the whole series pans out:

All iMacs models come with Apple’s new Magic Keyboard with Numeric Keypad and mouse. However, you may also want to get hold of the excellent Magic Trackpad 2, which costs an additional £50/$50. 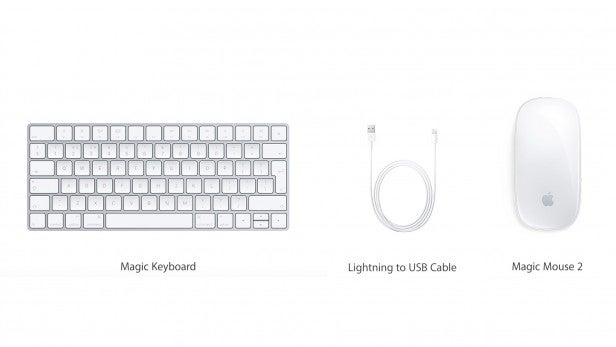 After spending years selling Surface tablets without their keyboards as standard, we’re glad to see Microsoft hasn’t left anything glaring out of the Surface Studio package.

You get a Surface Pen, Mouse and Keyboard. These appear to be similar to those Apple offers, the main difference being the mouse has a metal scroll wheel. 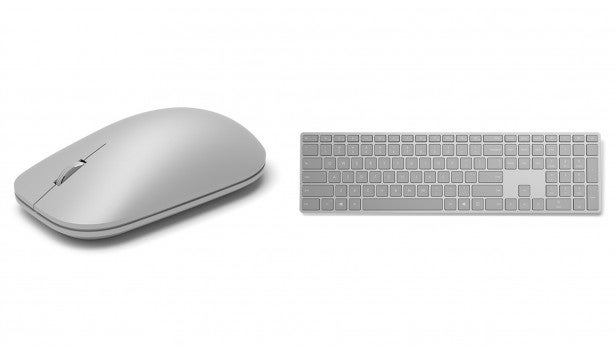 The Surface Dial is an extra, costing £89.99/$99, but given not all buyers would make extensive use of one, turning this into an optional extra seems sensible.

Thankfully, the software side of things is mercifully simple compared to the hardware side. Put simply, the iMacs come with the latest macOS Sierra, while Microsoft will provide you with its Windows 10 Pro OS on the Studio.

Which you prefer will come down to numerous factors, but it’s likely to hinge on which OS you’re used to. If you are familiar with both, you still might find one provides better software for the particular tasks you work on, whether it’s graphic design, sound production, video editing or just plain old word processing.

It’s therefore pretty difficult to say which side wins out here. Both operating systems offer some impressive features and now both feature a digital assistant, with Cortana providing the virtual help on Windows and macOS now coming with Siri. Apple tends to pack in a load of extra apps for use with its system, so if you plan on getting into some music production or basic video editing, macOS might be for you.

Alternatively, Windows 10 continues to improve, with Microsoft recently adding a load of improvements with its latest update. And when the Studio arrives, it should come with the just-announced ‘Creators update’ which apparently makes ‘3D for everyone’ , which means there’s a new 3D version of MS Paint.

We have not yet reviewed the Surface Studio, but we loved the iMac 27in 5K. It was one of the few products, ever, to achieve a perfect 10, and while we haven’t yet reviewed the 2017 model, things look to have vastly improved.

However, where the iMac is simply a very nice all-in-one PC, the Surface Studio is something more. Its versatile hinge and stylus-ready screen make it a potential design tool you’d need a separate graphics tablet to replicate in an iMac. It’s more expensive than a 27in 5K iMac too, which is quite an achievement.

The Studio is also one of the best gaming AIO PCs we’ve seen, in its top-spec iteration, although we’re a little disappointed Microsoft didn’t go even further and use Nvidia’s excellent latest-gen cards. Now, however, Apple looks to be catching up with its improved graphics.

We’ll be back with the final verdict once we’ve reviewed the Surface Studio and the new iMac.

Let us know which you prefer in the comments.