The deal in a nutshell is this: Microsoft will pay €5.44 billion (£4.6bn) to Nokia for its devices and services division and the rights to license its patents and mapping services. Affected Nokia employees will stay where they are but become employees of Microsoft and Nokia itself will evolve to become a telecoms infrastructure business. The deal is expected to go through during Q1 2014.

Microsoft buying Nokia: what it means for Microsoft
Like Apple and to a lesser extent Google and Samsung, Microsoft now has vertical integration in the market – i.e. it makes both the software and hardware. This model will allow it to develop Windows Phone and Lumia handsets (if the branding remains) in conjunction therefore optimising design, functionality, performance and maximising profit.

Crucially, the deal will also give Microsoft access to emerging markets. 45.5 per cent of Nokia shipments were to Greater China, the Middle East, Africa and Latin America in 2012.

Microsoft buying Nokia: what it means for its rivals
For its competitors the deal should see a more competitive Microsoft, but the company’s decision to build its own phones will also result in Microsoft entering direct competition with its Windows Phone partners.

In reality, this is likely to place greater strain on Microsoft than the likes of HTC, ZTE and Samsung as none have consistently shown strong commitment to the OS and will now be unable to compete with the license fee Microsoft charges itself: nothing. .

The problem for them is it would mean throwing all their eggs into one basket with Android (except for Samsung which has Tizen) – and Google is ramping up its own Nexus and Motorola ranges.

Naturally, Microsoft going it alone in handsets would be new territory for the company and for the moment it is trying to appease partners. Company EVP for Operating Systems, Terry Myerson, today claimed “[the deal] will help make the market for all Windows Phones, from Microsoft or our OEM partners.”

But the reality is Microsoft earns substantial royalties from Android and the Nokia patents purchases are only likely to increase that so partners – given their underwhelming efforts – will no longer be its primary concern. 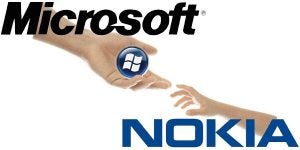 Microsoft buying Nokia: what it means for you
In the short term the answer is: not a lot. For the next 3-6 months, Nokia handsets will continue to be sold as before and even once the purchase completes next year Nokia’s roadmap will be set in stone for such a period that it could be a few years before the first truly Microsoft-inspired handset goes on sale. Look at the timescale of Google buying Motorola (August 2011) and the Moto X (August 2013).

Microsoft will also be honouring all Nokia warranties and keeping all Nokia employees, so little should change in the supply chain.

On the flip side, Microsoft and Nokia have been working together since their exclusive partnership began in February 2011, so what you are seeing from today’s Lumias is unlikely to be far from Microsoft’s vision. Microsoft also enforces a number of strict design, button layout and hardware parameters in any case, so why would we see radical change?

Microsoft and Nokia: why you should care
If little is likely to change in the short term then why should you care? Because it will change things substantially in the long term.

The most likely to suffer are smaller handset makers as the deal reduces Windows Phone’s appeal yet pushes them into bed with Android, which weakens them as choice evaporates. Whether this will make Google feel doubly secure and see it push its own hardware (either through the Nexus brand or Motorola) remains to be seen.

Similarly, the deal will vindicate Samsung executives’ decision to develop Tizen and could see it accelerate the schedule for Tizen handset releases. Their success will make or break its long term relationship with Google.

As for Apple, it knows Microsoft now has new supply chain efficiencies and better opportunity to accelerate Windows Phone development, which means it will need to regain lost momentum.

Whether it sees the deal as a chance to stamp out Windows Phone with a budget iPhone is debatable as .

Microsoft and Nokia: the questions that remain
So general consensus is while the deal will change little in the short term the knock-on effects long term will be significant. Yet significant questions still remain: