It’s still hard to believe Kingdom Hearts 3 is finally available to buy. For me, it’s a culmination of 13 years of waiting, over a dozen games of uncompromising lore and the closing moments of a young boy’s story to explore different worlds and understand the true value of friendship.

Newcomers to the series are probably staring at passionate fans in wide-eyed disbelief as they’re brought to tears at the sight of Donald, Goofy and Mickey Mouse fighting alongside a bunch of teenagers pulled straight from Final Fantasy. At first glance, it’s incredibly silly, but Square Enix has spent years cultivating a passionate audience that embraces the positive themes sitting at the core of Kingdom Hearts.

Despite spanning an absurd number of games across a growing list of platforms, Kingdom Hearts never strayed from one simple theme – friendship. Having people around who care about you is important; someone to lean on when times are hard and pull you through moments that would otherwise see you surrender to darkness.

The original Kingdom Hearts couldn’t have made this more obvious as Riku surrenders to darkness seconds after leaving his friends behind. Ambitions of greater power had our antagonist lamenting the loss of things that actually meant something to him. Fast forward to Kingdom Hearts 3 and this same pathos is reflected in Master Xehanort, a man rebuilding a society with copies of himself because he’s alone.

Approach Kingdom Hearts from this perspective and the story, even with all its convolution and melodrama, presents an engrossing narrative that tugs at heartstrings in just the right way. Now I’m a self-proclaimed super fan of the series and can even recognise how ridiculous Tetsuya Nomura’s vision has become in recent years. It’s understandably overwhelming, leaving curious newcomers behind in mountains of impenetrable lore.

However, Kingdom Hearts 3 does the best it can with an iffy situation when it comes to bringing players up to speed. Prior to release a new update saw the ‘Memory Archive’ introduced. Accessed through the main menu, it features a handful of bespoke presentations featuring cutscenes from previous games.

The narrator focuses on vital characters and the themes of friendship, ensuring you have just enough context to penetrate the 30+ hour adventure that awaits you. It’s far from the comprehensive encyclopedia you’ll need to understand the minute motivations of every character, but for those looking for base emotional investment this works just fine. 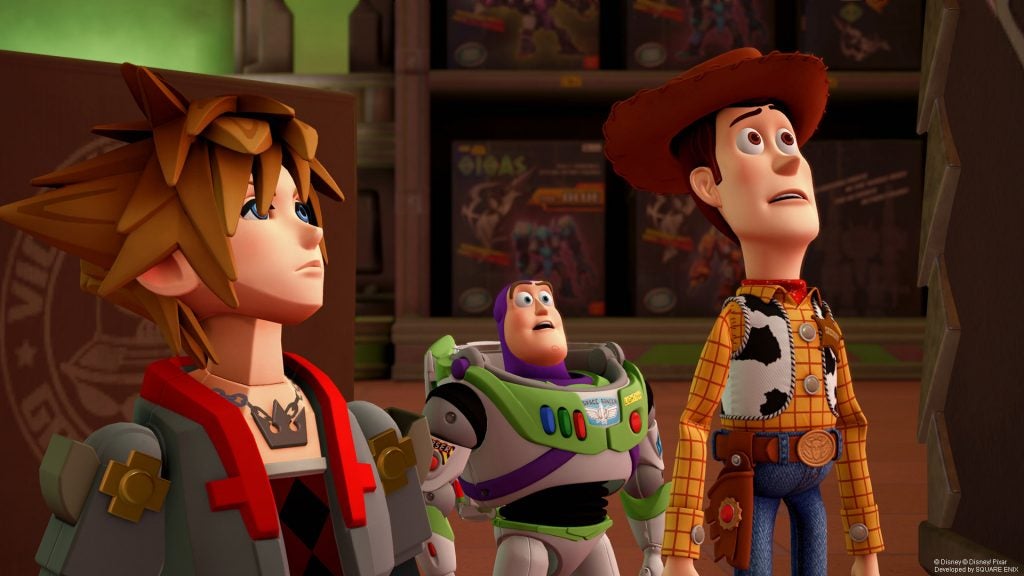 When you strip away all the internal conflicts that define its melodramatic central narrative, Kingdom Hearts 3 is still all about reliving your memories of classic Disney properties. This entry marks Square Enix’s first major partnership with Pixar, and it definitely shows. Monsters, Inc and Toy Story are created with startling creativity, offering a welcome respite from the Sora’s primary dramatic tale. As an outlet for beloved licenses, the passion displayed by Kingdom Hearts is second to none.

Outside of this you’ve got worlds based on Tangled and Frozen that embrace the mainstream appeal that Kingdom Hearts 3 undeniably has, bringing in players who will find themselves tied up in a narrative they might find impenetrable. Even in these worlds, the power of friendship remains the central conceit. It’s what you’re fighting for each and every time.

For example, Buzz and Woody find themselves searching for Andy, afraid that the child they admire has abandoned them for something, or someone, else. It’s an idea that’s easy to understand and unless you’re completely heartless, one you can sympathise with. It’s so blatantly conveyed that the series’ main enemies are known as “The Heartless.” 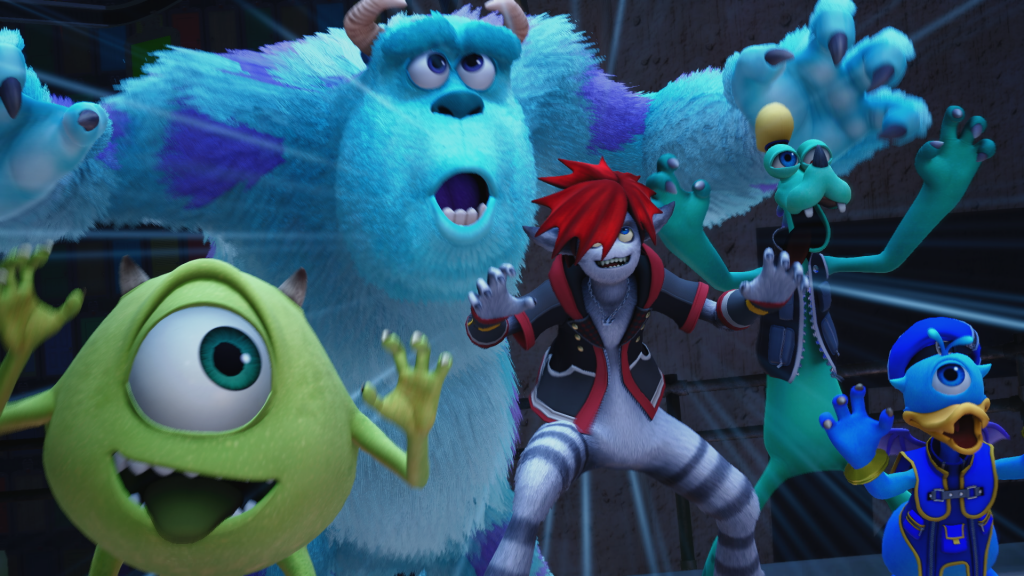 Perhaps I’m just in over my head, but Kingdom Hearts 3 presents a message I’d be happy to share with anyone. It has problems, often too busy obsessing with its own mythology to give its growing cast of characters room to breathe, but it remains a bright, wholesome tale of friendship in a world that’s frequently consumed by darkness.

The argument between veteran fans and critics regarding Kingdom Heart’s hubristic obsession with its own characters, worlds and convoluted overarching plot is worthy of debate, and hinders the entire series because it’s burdened itself with so many threads it can hardly untangle them all. And for years it couldn’t, and I grew tired of having to hop between platforms simply having to catch up.

But now you can experience the entire story on PS4 thanks to an abundance of remastered efforts, although it will take you over a hundred hours to see everything the series has to offer. If you’d rather just dive into the Memory Archive instead, it provides enough to understand the most important thing about Kingdom Hearts 3. Behind all the weird outfits, evil organisations and Disney characters lies something that matters above all else – friends, family and finding somewhere you belong.

Kingdom Hearts 3 is available now for PS4 and Xbox One.