MacBook Pro users, is it time to upgrade to the new Pro? Here’s how the two compare

Every year we get a new range of MacBooks. But some years are more important than others.

At first glance, you may assume the 2015 MacBook Pro is a case of small improvements you don’t need to worry about. It looks just the same, after all.

However, look a little deeper and you’ll see there are some real worthwhile changes this year. Is it worth the upgrade for 2014 MacBook Pro buyers, though?

Apple has now bumped-up both the 13-inch and 15-inch editions, and the power increase is significant but not massive. However, the lure of the new trackpad could be enough to dissuade us from buying a 2014 refurb over the new model.

Virtually nothing has changed in the MacBook Pro design this year. Their weights, casing style and feel are identical.

Looking closely at the contours, it seems the casing components are literally the same. Next to the new 12-inch MacBook, the 2014 and 2015 MacBook Pros do seem a little chunky and heavy, but they’re still thin and light enough to be used as ultraportable laptops. 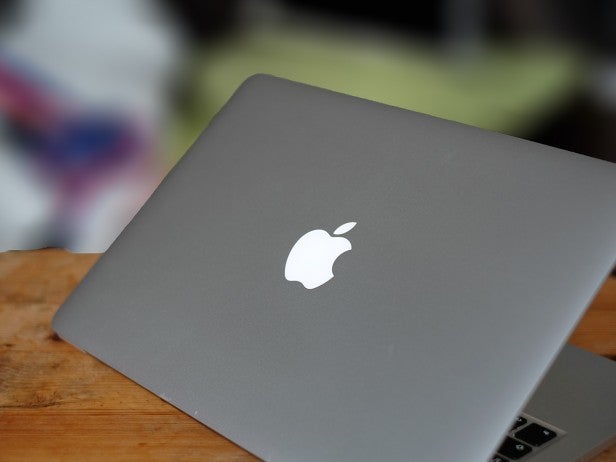 We put both of the 13-inch models on the scales, and even though they have slightly different specs both MacBook Pros weigh in at 1.565kg. We’ve used MacBook Pros daily for a year now, and they’re just light enough to carry around all day without shoulder ache, but here’s how they stack up against Apple’s skinnier laptops:

(all these figures were measured using our own scale, aside from those of the new MacBook and the new 15-inch MacBook Pro, which were not available at the time of writing. As such, nothing should be read into the slight difference in figures between the two 15-inch models until we’ve been able to get the new model on our scales too)

The new MacBook Pro doesn’t have any new connections this year. The load-out is the same.

You get two USB 3.0 ports and two high-speed Thunderbolt 2 ports. These are your main connectors, and there is also an SD card slot plus a full-size HDMI for easy connection to a monitor or TV.

Like every MacBook there’s also a headphone jack and the Magsafe power socket. Once again, though, this is a better setup than the 13-inch MacBook Air, which lacks an HDMI port and only has one Thunderbolt 2 socket. 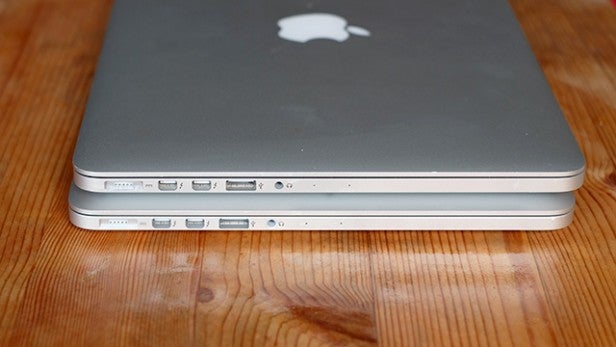 However, one of the major improvements is something you can’t see. Both sizes of the 2015 MacBook Pro have a much faster SSD disk drive than the last version.

Much as you need to be a power user to notice it as even the older version is far faster than a hard drive, the performance difference is quite large. We tried out both 2014 and 2015 13-inch models with the BlackMagic Desk Speed Test app. It’s available for free on the Mac App Store, if you want to try it on your own computer.

It’s with read speeds that we see a much bigger difference. The 2014 SSD reads at a similar speed as it writes, with 725-730MB/sec read rates. However, in the 2015 model that rockets up to 1250-1350MB/sec. Read speeds are phenomenal, providing incredibly quick access to data.

This improvement in flash storage seems to have been brought to the recently revamped 15-inch model too. Apple is claiming 2.5 times faster flash storage than the previous generation, with throughput of up to 2GBps. 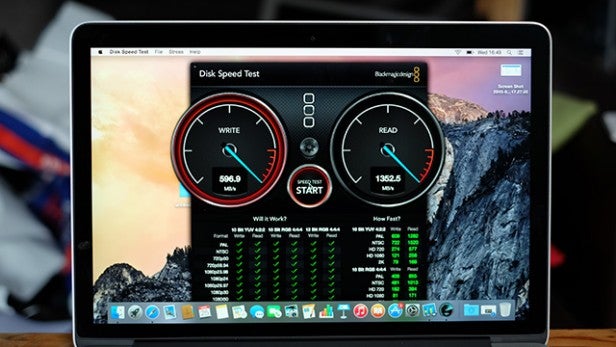 While both 2014 and 2015 MacBook Pro SSDs are fast enough for video editing and other data-heavy applications, that extra read speed will come in handy for some.

In power terms, the big change this year is an architecture switch – at least for the 13-inch model. The smaller 2015 MacBook Pros use Broadwell-generation CPUs while last year’s models have Haswell ones.

Yep, Intel’s next generation of laptop processors is finally here, and it sees the chips’ transistors slim down from 22nm to 14nm. This means more efficiency and, as we’ll see later, better battery life. It also brings a pretty significant power increase too, despite not sounding that different in spec. 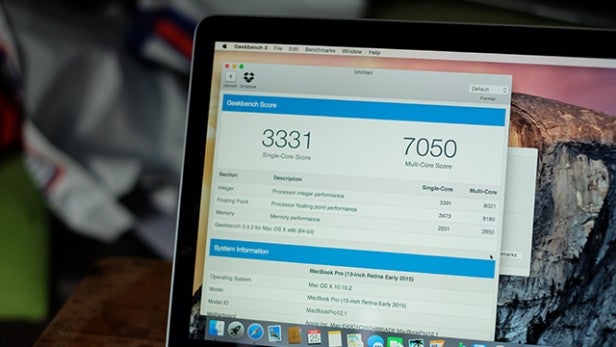 We got 7062 points out of the 64-bit Geekbench 3 test, while you’re get around 6000-6500 points from a 2.6GHz previous-generation model. This isn’t the sort of performance difference you’d notice while you’re just browsing the web and writing documents, but it is great for those with big power demands.

Still, a Core i7 Haswell MacBook is still going to be an awful lot more powerful than a 2015 Intel Core i5 one. And some may actually notice a RAM upgrade more. Both generations have 8GB as standard, though, which is enough for most people.

What about gaming? Broadwell also introduces a new GPU, the Intel Iris 6100. The last MacBooks have Intel Iris 5100 GPUs. 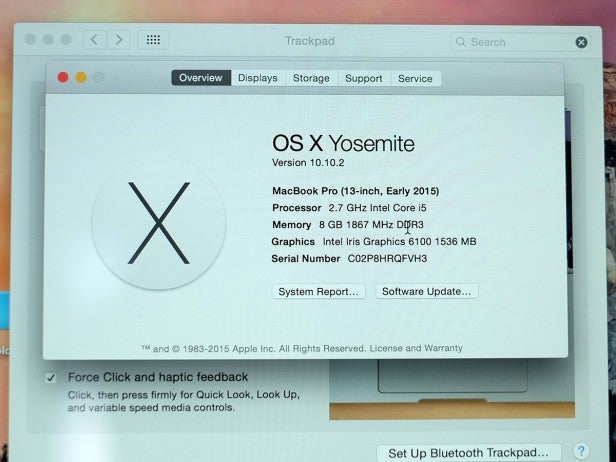 That’s a nice extra chunk, and with the Intel HD 6100 we’re getting fairly close to the performance of a real entry-level, slightly older dedicated card. It won’t satisfy enthusiasts, but means you can run some new games on low settings. The only truly gamer-friendly MacBook, though, is the 15-inch MacBook Pro with discrete graphics, which will cost you £2000.

Speaking of the new 15-inch model, Apple hasn’t upgraded the architecture to the new Broadwell standard as it has with the latest 13-inch model. This is because Broadwell remains unavailable in a quad-core configuration, which is what the more powerful 15-inch model goes with.

Apple has made a change with the aforementioned optional discrete graphics option, which is now an AMD Radeon R9 M370X rather than last year’s Nvidia GT 750M. It remains to be seen if this new chip offers any performance improvement over last year’s model, but it’s notable that battery life has improved significantly (which we’ll discuss in a bit), so this may have been a move based on efficiency rather than power.

While the new-design 12-inch MacBook has a new keyboard style, the 2015 MacBook Pro uses the same scissor-mechanism chiclet keyboard as the 2014 model. That’s not necessarily a bad thing, though. The new MacBook’s ‘butterfly’ keyboard has a very shallow action, which some people say feels almost like typing on a touchscreen. We use a keyboard to get away from that feel.

Both MacBook Pro keyboards are crisp and responsive. No major changes here.

The backlight has changed a bit, though. It uses a new LED array whose tone is a little bit warmer than last year’s. Will you really notice? Probably not.

Undoubtedly the coolest part of the new MacBook Pro is the trackpad. It’s brand new, and is called the Force Touch pad. It’s not seen in MacBook Airs, but it has now made its way to the 15-inch MacBook Pro alongside the 13-inch Pro model and the ultra-skinny new MacBook.

It looks just like the old MacBook Pro’s trackpad, but is actually quite different technically. The older trackpad uses a mix of a physical hinge and a software-managed ‘click’ to get you the right action and feel. The new one barely moves, relying completely on haptic feedback to make it feel as though it does. 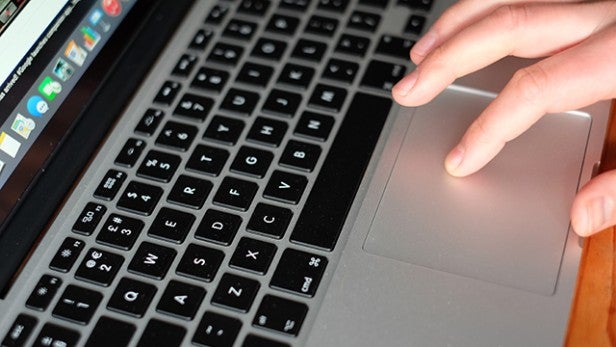 This lets you use the entire trackpad as a button, where the older kind has a dead zone at the very top. It’s also pressure sensitive, and you can press harder on the pad to access secondary functions. These are app-specific, but include things like getting a preview of web page links in Safari. That deeper click is complemented by a more severe haptic click. Again, this is all about getting the right feel.

As well as getting you another gesture, it’s a lot quieter than the old trackpad. However, the initial mouse click is also a fair bit softer. You can customise it in your MacBook Pro’s Settings area, but even at its maximum setting, the haptic feedback is a bit less sharp and pronounced than the old model. 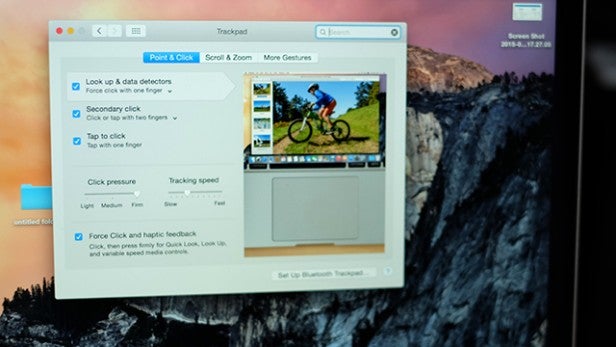 There does seem to have been some changes to the display’s construction, though. Quite simply, reflections don’t look the same on the 13-inch model we tested. As glossy, glass-topped screens, the MacBook Pro will always suffer from reflections a bit, but the new model’s reflections’ tone is a little different. They’re warmer, more orangey. Less apparent too? Not really, although we do think that as the MacBook Pros have strong backlights you can use either outside, even on a sunny day.

It remains to be seen if the 2015 15-inch MacBook Pro has had the same adjustment. 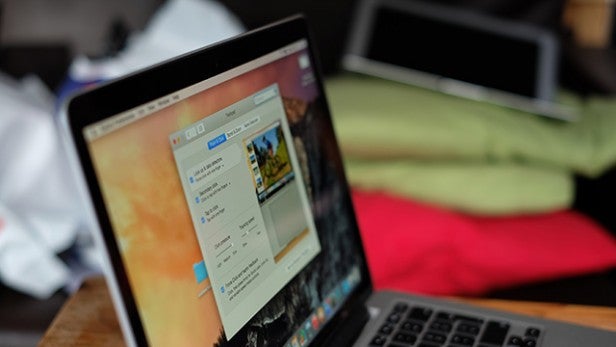 Apple hasn’t changed its battery tactics for 2015. The battery units still occupy the back part of the base, and seem to be roughly the same size.

However, thanks to the efficiency savings of the Broadwell CPUs, the 13-inch MacBook Pro 2015 model lasts a bit longer than the last. Where the 2014 model will last for up to nine hours, the new one lasts for up to 10. 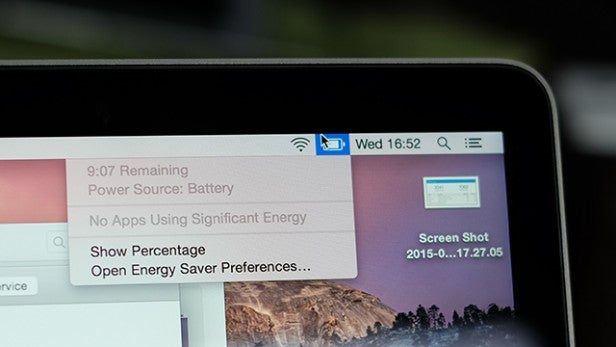 It’s not the sort of stamina increase that’ll change your life, and doesn’t see the Pro reach MacBook Air stamina heights, but having used the 13-inch Pro for a couple of days as our main laptop, the increase is real.

The 2015 MacBook Pro range is more an interesting upgrade than an important one. Power is still entirely determined by the model you pick, battery life is improved but in the same league and the screen is very similar.

It’s things like the trackpad that may make you want to try out the new MacBook. And, to be fair, it is worth experiencing. However, unless you’re very flush indeed, it probably doesn’t warrant an upgrade for those who only bought a MacBook Pro last year.