Read our full reviews of the Apple MacBook Air 13in
and Samsung Series 9 900X3B.

Apple’s 13in Macbook Air is still one of the classiest and most popular laptops on the market, so we decided to face it off against the best of the 13in Windows Ultrabooks, the Samsung Series 9 900X3B. While your choice of OS may predetermine your hardware choice, it’s actually possible to install either Windows or Mac OS on both of these machines (though Apple dislikes its operating system being installed on anything except its own hardware, but that’s a whole different kettle of fish). So which laptop comes out top in the hardware stakes?

MacBook Air VS Samsung Series 9: Design
This is a tough one. Since both laptops are immaculately constructed from sandblasted aluminium with beautifully sleek curves, it becomes a case of personal preference. The MacBook has supreme minimalism, and an all-silver body offset by the black keyboard keys and strip in the screen bezel. The Series 9 900X3B has a darker gunmetal finish with silver highlights and more physical curves, while its keyboard and screen don’t contrast with the body.

Verdict: Whichever one you prefer aesthetically, in our personal opinion the Air wins it by a whisker.

MacBook Air VS Samsung Series 9: Slimness and Weight
Both of these wedge-shaped supermodel laptops are slim enough to fit in manila envelopes, but which one is the slimmest? The MacBook Air 13in sports a maximum thickness of 17mm, but Samsung’s 900X3B takes thinness to new levels, measuring a mere 12.9mm at its bulkiest end.

When it comes to weight the Series 9 wins again, as it beats the Air’s 1.35kg by tipping the scales at 1.15kg.

Verdict: Thinner and lighter, this is a no-contest win for the Samsung Series 9.

MacBook Air VS Samsung Series 9: Connectivity
The MacBook Air 13in offers a full-size SD card slot, twin USB 2.0 ports, a headphone jack, and its trump-card: a Thunderbolt connection, which shares its port with the laptop’s microDisplayPort video output.

The Samsung Series 9 900X3B gives you a full-size SD card slot, one USB 2.0 port and one speedy USB 3.0 one, a headphone/microphone combi jack, a VGA output via a dedicated dongle, microHDMI for digital video, and Gigabit Ethernet/LAN through another adapter.

Let’s just make this clear from the start: the potential for Thunderbolt is huge, and could even include external graphics cards. However, the fact of the matter is that at the moment there’s very little that supports it, and unless you get a device that offers pass-through, you’re also blocking the Air’s only video output.

USB 3.0 as offered by the Series 9, on the other hand, is common for high-speed storage from affordable memory sticks to hard drives, and is finding its way into DisplayLink USB devices. MicroHDMI adapters are also more common and cheaper than their microDisplayPort counterparts. And the Samsung will let you use wired internet without buying an adapter and losing a USB connector.

Verdict: Until we see more support for Thunderbolt, the Series 9 wins hands-down. 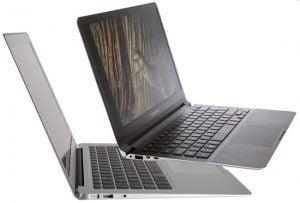 MacBook Air VS Samsung Series 9: Usability
Getting beyond the Windows VS MacOS debate, how nice a laptop is to use will depend on its screen and input. We’ll get to the screen in a bit, but first let’s see which of our ultraportable champions offers the superior typing and cursor control experience.

Both the MacBook Air and Series 9 offer backlit chiclet keyboards. While neither of them is a patch on the kind of experience offered by the super-affordable Lenovo ThinkPad X121e, they’re still very nice as ultraportables go. Layout and key travel are virtually identical between the two, though the Series 9 900X3B scores minor points for making its backlighting adjustable and not truncating its Enter key.

Likewise, the huge, button-less, glass touchpads both of these laptops sport are incredibly similar in use, with most of the difference being down to drivers and software.

Verdict: It’s a draw folks, though it’s worth noting that MacOS does make better use of gestures on a touchpad than Windows.