Should You Upgrade to a 2014 MacBook Air?

Apple has unveiled some new MacBook Air models, a go-ahead sign to buy now if you were waiting to see what was coming out of Apple’s labs this year.

If you wanted big change, you will be disappointed. The 2014 MacBook Airs are much like last year’s models, with some minor – but important – tweaks.

There’s only one real spec difference between the latest MacBook Air generations. The 2014 editions are slightly faster, their CPUs boosted from 1.3GHz to 1.4GHz.

There is also a corresponding increase in clock speed in their Turbo Boost modes. However, neither upgrade is going to see a particularly dramatic performance increase.

Both the 2013 and 2014 MacBook use Haswell-generation processors and Intel HD 5000 graphics, and these two are the key indicators of performance in a yearly upgrade like this.

The Broadwell ‘big deal’ for laptops like the MacBook Air is that its processor architecture will allow for more efficient processors, which should lead to better battery life. And that was something that Haswell processors have already improved significantly compared to older generations.

For the techier among you, Broadwell will bring 14nm architecture processors, where Haswell chips use a 22nm process.

Arguably a lot more important that the minor spec upgrade, the 2014 MacBook Air models are £100 cheaper than their 2013 counterparts. This saving is seen in both the 11-inch and 13-inch MacBook Airs.

As well as helping to silence a few of those critical voices that claim all Apple laptops are hugely overpriced, this price change helps re-establish some distance between the Air and Pro ranges. The 11-inch Air now starts at £749, the 13-inch £849. The top-end 256GB 13-inch model costs £999.

This means all the Airs are cheaper than the Retina display Pro laptops. There is a ‘legacy’ MacBook Pro without Retina screen for £999, but this also has a slightly older chipset – it’s not a true up-to-date laptop and is best avoided, really. 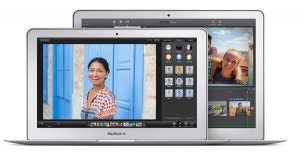 For the average buyer, a price drop is as good as a big change in hardware. However, the real tech fans may be disappointed.

There were expectations that the 2014 MacBook Air would offer a Retina display, but the resolution remains at a pretty ordinary 1,440 x 900 (13 inch) and 1,366 x 768 (11 inch). There are some pretty serious technical hurdles to get over in making a laptop that’s as thin and light as the MacBook Air while offering a high-res screen and Apple’s renowned battery stamina.

We imagine Apple might need the increased efficiency of Intel Broadwell before it can get there.

There are also no substantial hardware changes – 17mm thick and 1.08/1.35kg respectively, the MacBook Airs are as slim and light as ever. But no more so than before.

There is no substantial reason to upgrade a 2013 MacBook to a 2014 one. You simply won’t notice the performance difference in most situations.

However, we don’t think Apple has dropped the ball in any way here. By dropping the price, it may be able to lure in a new swathe of laptop buyers and it seems the tech to warrant a more substantive upgrade isn’t here yet.

Do we want a Retina MacBook Air? Absolutely. But not if its battery only lasts for three hours.

Next, see our pick of the best laptops