Back in January I argued it is time to embrace big screen phones and it drew a lot of response. The motivation came from being a long term iPhone user who has owned every model, but didn’t feel the urge to purchase the fractionally larger iPhone 5. It seems I am not alone in this, as iPhone 5 sales are reportedly not meeting expectations. The next step was logical: live with some large screen phones and report back about how I got on. That time is now.

Lesson 1: Get a Grip
I picked two handsets for the test period, spending a week with each. The first was Samsung’s 5.5-inch Galaxy Note 2, the second Google’s 4.7-inch Nexus 4.

In hindsight I got the order wrong. Wanting to jump in head first with what is currently the largest screen on any smartphone was bold, but foolish. Day one saw me running late for a meeting and rushing down the street, motorcycle helmet in one hand, phone in the other, frantically trying to send an apologetic text message. The experience had me lamenting the absence of my iPhone 4S. But as is so common in early relationships the problem proved to be: ‘it’s not you, it’s me’. 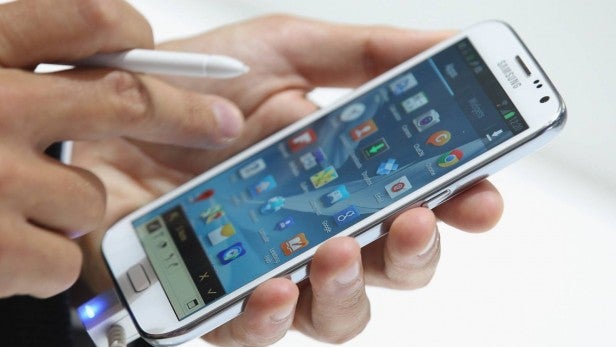 It turns out what moving to a big screen phone requires is learning new muscle memory. It isn’t about weight (the iPhone 4S is quite a porker in this regard), but grip. Wider screens result in a wider grip and this reduces the reach of your fingers, resulting in the much repeated ‘but you can’t use them one-handed’ speech.

This is true… at first. With time you realise a big screen phone doesn’t sit dormant in your palm while your fingers move, it moves up and down your palm to allow your fingers to reach things. It’s awkward to start with (and far more so on the Note 2 than the Nexus 4) but, like forming chords on the guitar, quickly becomes second nature.

Lesson 2: Typing Nirvana
Much is made of the fact big screen phones can’t be used for typing one-handed, but in practice I found this simply wasn’t true. Most simply, apps are available that will shrink a keyboard and lock it to the left or right side of the keyboard, depending on whether you are left or right handed. This will accommodate even the smallest hands.

For long-term iPhone users the other real game changer is keyboards like Swiftkey and its ‘Flow’ system, which simply requires users to swipe between letters and to the spacebar without ever leaving the screen. This lets you keep a grip on the phone and simultaneously type with ease. Android 4.2 introduced a similar system, but until it incorporates the spacebar and better customisation to your writing style (Swiftkey has the option to scan your emails and social media to learn your vocabulary and abbreviations) it will lag behind.

Needless to say when typing two handed, via Swiftkey or not, these larger screen sizes also make things easier than their smaller screen equivalents while being less unwieldy than a tablet.

Lesson 3: Promising Productivity
With the biggest queries addressed the upsides of a big phone came to the forefront. Most notably – you can get more done, more quickly. Muscle memory can work against you with an iPhone too and it is amazing just how accustomed you become to continually moving things around to complete each task.

The iPhone’s 3.5-inch screen means writing emails or instant messages requires regular scrolling to check the original message, browsing requires continuous zooming and swiping around a page and consistently turning to landscape mode and apps are more cramped. These aren’t eliminated with a big screen phone but you do them far less, simply because you can see more at any one time. Returning to an iPhone felt exhausting by comparison, it was like returning to work on a desktop PC with a 14-inch monitor. 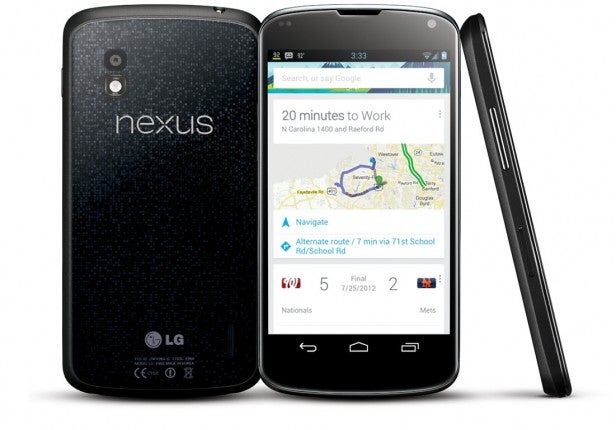 Lesson 4: Better Battery Life
This is far from universal, but the trend on phones is the bigger the screen the better the battery life. This for the simple reason that the chipset, even if more powerful, only increases fractionally in size while there is a lot more room for a much bigger battery that more-than offsets the larger screen. For example, the Note 2’s famously capacious 3100mAh battery saw it last a full day even when used intensively (including hours of GPS navigation and tethering) and up to two days with moderate usage.

The 2100mAh battery in the Nexus 4 also got me through a day and we’ve previously found this true with the 2100mAh sporting Galaxy S3 (though there are some conflicting reports) and the HTC One X(plus).

The iPhone 4S on the other hand is limited to a 1430mAh battery and the iPhone 5 could only make space for this to be increased by 10mAh to 1440mAh which shows the tight squeeze. Contrast this with talk that a 5-inch Samsung Galaxy S4 will fit a Note 2-matching 3100mAh battery. Of course processor optimisation, operating system efficiency, users’ individual settings and much more play a huge role, but that you can fit physically larger batteries into big screen phones remains a simple reality. Needless to say many large screen phones also have replaceable batteries, though not the Nexus 4. 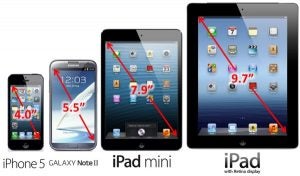 Lesson 5: Phablet Means Less Tablet
As an iPad user I found my usage of the tablet fell through the floor when using a large phone. At 3.5 inches the iPhone was always dumped once I got home, but a bigger screen phone remains a pleasurable way to consume content back in your abode and I enjoyed not having to hop between two devices. I’m sure tablet aficionados won’t be dumping their iPads in droves, but intrinsically you rely on them less and don’t always feel the need to take them everywhere with you.

Discussing architect plans with a builder, for instance, was easy on the Note 2 and amusingly, as an iPhone owner, he wanted one by the end of the conversation.

Video is the other big benefit as I quickly found myself taking films and episodes of TV with me for longer journeys and again leaving the tablet on the coffee table.

Lesson 6: Size is Addictive
After a week using the Nexus 4 its 4.7-inch screen felt small. This would have seemed ludicrous to me a few weeks back, but talking with owners of other 4.7-inch handsets I found they could relate. By contrast having lived for so long with a 3.5-inch display I had stopped asking the question… ironically right up until the launch of the iPhone 5 which made me sit up and declare “that’s not big enough”. 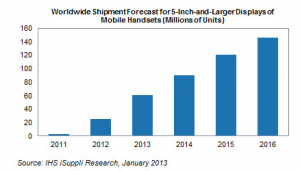 Interestingly most of 2013’s flagship smartphones will sport five inch screens – the number isn’t picked out at random, manufacturers have done their research. So too has IHS Suppli, which says handsets with 5in screens or more will see shipments double from 25.6m to 60.4m in 2013 making it by far the fastest growing segment. By 2016 it predicts sales of over 140m, though with Apple shipping 130m iPhones alone in 2012 it shows smaller phones continue to have massive appeal and significantly, outside of Apple, lower retail prices.

Verdict: Size Matters
It must be stressed this is my personal opinion and yours may differ strongly, but what has struck me since living with (as opposed to reviewing) a big screen phone is I’m loathe to return to my iPhone and it is a size issue. The iPhone 5 made me realise I didn’t want to step up just 0.5 inches and if all Apple delivers is an iPhone 5S in July/August it will be 2014 before something larger comes along.

I’ve got the size bug and right now that means Apple can’t cater for me, whatever I think of iOS. With curious iPhone 4 and 4S customers either out of or coming towards the end of their contracts that’s a dangerous place for Apple to be in. Android, Windows Phone and BlackBerry users all now have handset options with displays in excess of Apple’s four inches and if Apple is loathe to risk cannibalising its iPad mini sales then paralysis could be the biggest threat of all.

Despite all this I must admit the iPhone remains the easiest phone to use one handed, even if the margins were smaller than I expected. What I will say though is that alone is no longer enough to determine what my next handset will be. Ultimately if you have been considering taking on more inches I urge you to do so. As Apple once said, ‘It’s Resolutionary’.

Note: many thanks to Three for the loan of both handsets