While LG’s TV division grabbed a few headlines in 2013 by managing to launch Europe’s first commercially available big-screen OLED TV, it wasn’t a particularly vintage year for LG overall. The brand simply hadn’t advanced its pictures as far as some rival brands.

Naturally we’ll be hoping LG can turn this round for 2014. Though in the mean time it’s fair to say that so far as the CES 2014 tech show was concerned, LG was still doing a good job of grabbing headlines with such stand-outs as ranges of curved and flat UHD TVs, plus a genuine range of OLED TVs alongside a concept model that actually curves and straightens to suit your tastes!

1. OLED is still alive and kicking for LG 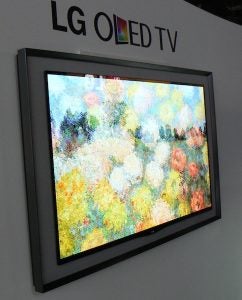 What is it? OLED is a flat-screen picture technology that uses organic materials to illuminate its LEDs, meaning that each pixel can emit its own light to improve brightness, colour response and black levels. It tends to deliver amazing pictures, but is also currently hard to manufacture, resulting in high prices.

But this hasn’t stopped LG from being the only brand at this year to aggressively push OLED as a current (rather than future) TV technology, featuring among its wares a new curved full HD OLED TV, a flat ‘Gallery’ OLED TV built into a picture frame, and most excitingly of all, a range of three UHD/4K OLED TVs including one measuring in at a mighty 77 inches.

What we think: We’ve always loved OLED – and nothing about what we’ve seen from LG’s OLED TVs this year has changed that. While we have our doubts about the aesthetics of the Gallery model (it actually looks rather cumbersome to us) and we increasingly wonder about the wisdom of selling non-4K OLED TVs, the trio (55-inch, 65-inch and 77-inch) of 4K OLEDs LG have shown all look stupefyingly gorgeous, blending spectacular, super-thin designs with incredible contrast, colours, resolution and motion.

The 77-inch model in particular is gorgeous, letting you see exactly what OLED – especially 4K OLED – is capable of on a larger scale than we’ve seen before. The only downside is a familiar one for LG OLED TVs: the glossy screens seem rather reflective, with the reflections being stretched and exaggerated by the curved OLED shape.

For the sake of completeness we should mention that next to the three ‘real’ OLED TVs on LG’s stand at the CES 2014 tech show was a concept OLED screen you could make go concave or flat as you wish, thanks to a concertinaed rear panel.

This looked extremely cool, but we’re not convinced anyone would really want such a ‘bendy’ TV. Especially given the small fortune it would almost certainly cost to buy should it ever go into proper production. 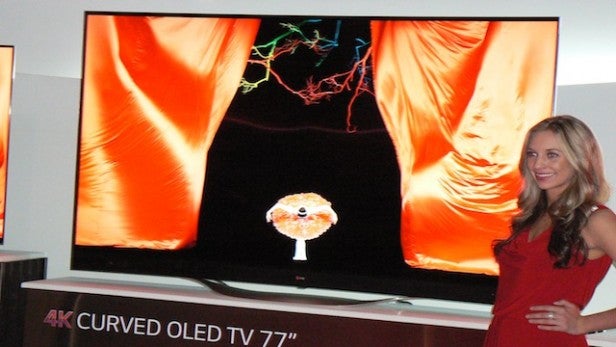 What is it? The trio of OLED sets were certainly not the only UHD TVs on LG’s stand. Also present and correct were flat and curved ranges of LED 4K TVs. Well, maybe ‘range’ is pushing it a bit where the curved models were concerned, as the only one apparently prepped for launch was a humongous 105-inch, $70,000 model, the 105UB9, cut to the 21:9 ratio (and so actually giving a 5K resolution of 5120 x 2160).

There was a much more manageable 65-inch curved UHD LED model sat beside the 105-inch on LG’s stand, but this wasn’t confirmed for launch. Still, with Samsung already confirmed doing a full range of curved LED UHD TVs, it’s a pretty fair bet LG will follow suit at some point before the year is out.
Far more complete as a range was the UB9800 series of flat LED UHD sets. There are some prodigious sizes in there too, including 98 and 84-inch models. All these panels use LG’s trademark IPS panels for wider viewing angles and passive 3D playback , as well as a striking ‘frame within a frame’ design.

What we think: While LG’s curved TVs undoubtedly look lovely, LG isn’t as committed to the curve cause as its Korean rival at the moment – unless you’re rich enough to buy an OLED. What curved models there are, though, undoubtedly looks pretty good. 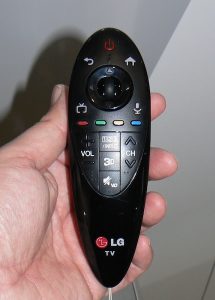 What is it? Despite having one of the more content rich and pretty Smart TV services for the past couple of years, LG has completely revamped its 2014 Smart interface with the help of the WebOS platform it bought last February. And the results are pretty startling.

The interface is a complete reboot, replacing the polished but perhaps rather cumbersome full-screen hubs of last year with a colourful, bright, crisp combination of superimposed icons, folders and side bars that give way slickly to full-screen HD, graphics-rich menus when required.

What we think: LG might not have had its mitts on WebOS for long, but it’s done a heck of a lot in a short time. So much, in fact, that it’s delivered what felt during our time at the CES like the best all-round smart TV interface at the show.

The way it combines speed, responsiveness, layout, and multitasking while presenting huge quantities of options without feeling cluttered is a revelation. Especially when all this on-screen goodness is combined with LG’s inspired new Magic Remote design, with its fast, accurate point and click approach and ultra-comfortable layout.

What is it? It wasn’t just the abundance of curves and super-trim backsides that stood out about LG’s TV designs at the CES. Also notable was the lengths LG had gone to with many of its star models to accommodate serious speakers.

The most extreme example was found with the 105-inch curved 4K LED mentioned earlier, where the screen comes fixed atop a 7.2-channel speaker system designed in conjunction with quality audio brand Harman Kardon.

Harman Kardon’s influence is also present in the ‘Gallery’ OLED TV design, where a potent 2.2-channel system has been tucked into the space between the TV and the outer ‘picture frame’.

And perhaps most importantly in terms of being something normal (ish) punters might actually be able to get their hands on, the flat LG UB9800 4K / UHD models on show at the CES feature an outer frame containing vertical speakers to either side that run the full height of the screen, and are joined by two meaty woofers in the TV’s base. The largest model manages to use this configuration to deliver a total of 120W into 5.2 channels.

What we think: It’s pretty much impossible to get an accurate sense from a packed show floor of just how superior LG’s audiocentric TVs might sound versus normal flat TVs. But there’s no reason to expect that the results will be any less impressive than those heard from the innovative ‘slide down’ speakers built into LG’s 65LA970W. In any case, any attempt to take audio so seriously in today’s ultra-slim TV world deserves credit – especially when the large speakers have been integrated so effectively into the design. 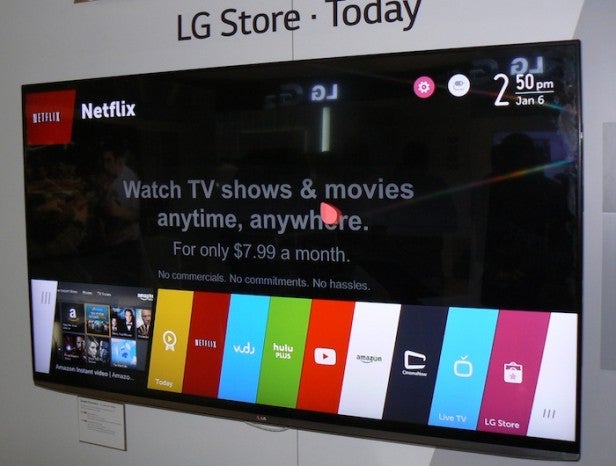 What is it? One of the biggest pieces of 4K / UHD news coming out of the CES so far as UHD was concerned was the announcement that Netflix would be launching 4K streaming as early as February using the HEVC H.265 format. And while LG isn’t the only brand at CES whose next-gen UHD TVs can handle this format, LG went beyond most rivals by securing the rights to actually show a House of Cards (shot in 4K) showreel on its stand.

What we think: After a bit of investigation, it turned out LG was cheating with its Netflix reel. It wasn’t streaming direct into the TV. Instead it was playing – at 60fps, though! – from a USB drive. Which means we ultimately couldn’t read much – alright, anything – into the rather disappointing, MPEG noise-ridden pictures we saw.

However, even though it turned out the Netflix ‘footage’ wasn’t the real deal, the fact that the footage was there at all made LG feel more connected to a more imminent 4K future than any number of bland ‘home made’ 4K demo reels. Sneaky.

Incidentally, we fortunately got the chance to check out a genuine Netflix 4K feed at Netflix’s own booth later on during our CES visit, and although we don’t know what bandwidth it was streaming at (you’ll need at least 15MB of broadband speed to try it yourself) look superb.

Yes, we know most of you won’t have even a prayer of being able to afford an EC9800. But they have to be mentioned here because for us they produced the best picture quality of any TV at CES, and because they kept the OLED flag flying at a time when most other brands seem to packing OLED up and heading home.

The UB8500 TVs are LG’s step-down 4K / UHD proposition. This means they lack some of the bells and whistles of the top-end models; for instance, the smaller speakers are limited to 20W, and pictures are rendered at 120Hz rather than the 240Hz possible from the UB9800 series. But for many people the fact that the UB8500s are relatively basic by UHD standards will make them more rather than less interesting on account of their likely affordability. 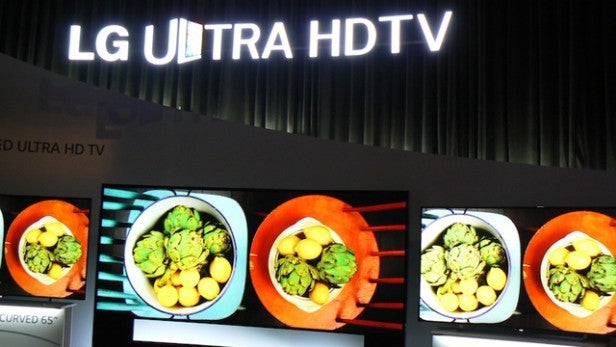 LG TVs in 2014: Our first impressions

For sheer diversity of product, LG’s TV range was unmatched anywhere else at the CES. You want curved UHD OLED? You got it. Flat HD OLED? Got that too. Flat LCD UHD? Budget and premium LCD UHD? All there, along with flat HD screens to suit all budget. What’s more, the vast majority of LG’s 2014 TV offering will come with the excellent-looking new webOS platform.

If there’s a worry about LG’s range it’s that picture quality may struggle on some models. Certainly LG wasn’t making as much of a noise about picture improvement technologies as many of the other big brands. But then again, once you’ve stared at that stunning 77in OLED for long enough you’ll be prepared to believe LG is capable of pretty much anything.

Next, read our What is 4K TV? guide