Do you go Samsung Galaxy S6 vs LG G4? We’ve reviewed both and here’s which of the two best Android phones of the year you should go for

The LG G4 has launched and is now available to buy. While the LG G3 successor didn’t blow us away in the same way as our pick for 2014’s best phone, it builds on some of its best features and even gave us a leather back option.

Is it enough to beat our current favourite phone of this year, the Galaxy S6? After reviewing both individually, we’ve now spent some more time living with both.

Here’s which one we think is king of the 2K phones.

The LG G4 is an odd-looking thing. It’s instantly recognisable as the G3’s successor, thanks to its angular corners, gently-curved back and rear-mounted physical buttons. However, it also comes clad in genuine leather that’s available in a variety of colours, including orange, blue, yellow and black.

While that’s certainly a step up from the ghastly faux leather we’ve seen on past Samsung phones and tablets, we’re still slightly weirded out by the choice. It’s unique, but in a strange, rather than elegant, way, largely due to that seam running down the back. Still, it allows access to the 3,000mAh battery, which is very handy, and we’re also glad it comes with a microSD card slot. 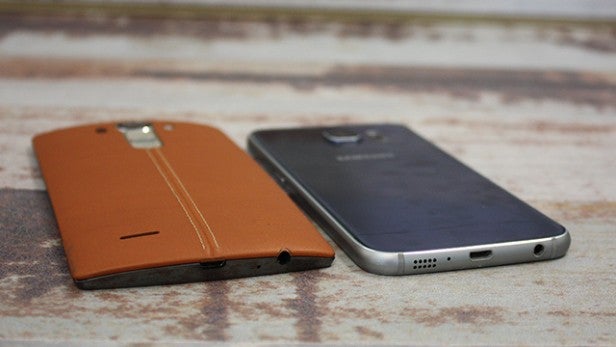 The Samsung Galaxy S6, meanwhile, is without doubt one of the best-looking smartphones available. After developing an unwanted reputation for building plain, plasticky devices, Samsung’s finally bucked up its ideas. Like the G4, the S6 is clearly based on the same blueprint as its older brother, but it’s also starkly different. From the front, it looks like the S5, but with slimmer bezels and a larger physical home button that accommodates the improved fingerprint sensor.

Crucially, the rear is now glass rather than plastic, and it’s a massive aesthetic improvement. The protruding rear camera is an odd, slightly ugly addition and, unlike with the G4, you can no longer access the battery. Most importantly of all the microSD slot has been chucked out. However, you do now get wireless charging support.

Thanks Samsung, but we’d rather have a cheap additional storage. 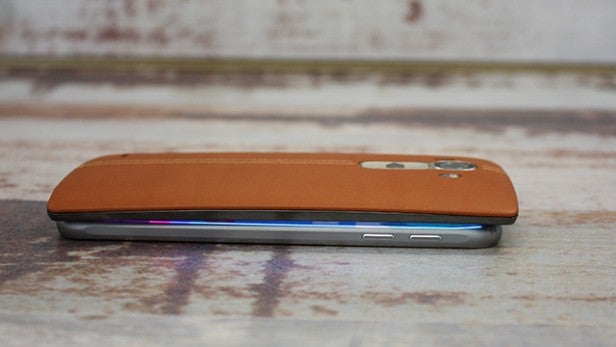 Size is one of several key differences here. The LG G4 packs a firmly phablet-sized 5.5-inch display that equals that of the G3. It’s a QHD panel – that’s 2,560 x 1,440 to you and me – with a pixel density of 534ppi. While the display is huge the phone itself is well suited to one-handed use thanks to the small bezels and rear buttons.

The Galaxy S6’s 5.1-inch display has the same QHD resolution, but squeezes all of those pixels into a smaller area, which is friendlier to small hands. The result is a slightly higher pixel density of 577ppi. You might assume that makes Samsung the clear winner, but there’s still a question mark over how useful QHD displays are on small screens, and most people probably won’t notice any difference in sharpness whatsoever. 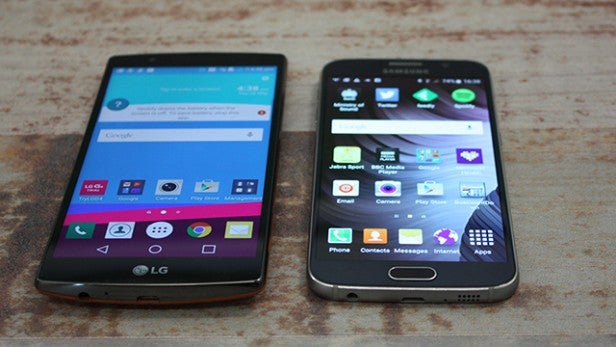 AMOLED is the display technology of choice for the S6, which translates to perfect black levels and exceptional contrast ratio. LG, meanwhile, went to great lengths to explain the G4’s screen technology, which is designed to be both brighter and more vivid than that of the G3.

The entire panel is slightly curved from top to bottom, which the company says makes it more durable than flat screens when it’s dropped. LG calls it an ‘IPS Quantum Display’, and claims it offers a 50% boost in contrast ratio, a 20% improvement in colour reproduction and a 25% hike in brightness over regular IPS screens.

We’d be inclined to favour the Samsung S6 screen as it’s also a little brighter and punchier than the G4’s screen. Both are still great smartphone displays.

Interestingly, neither handset features Qualcomm’s 64-bit Snapdragon 810 processor that the HTC One M9 packs. Instead, the LG G4 runs on the less powerful hexa-core Snapdragon 808 chip, paired with 3GB of RAM. LG and Qualcomm say this is more to do with battery management than the 810’s ongoing overheating concerns. Performance is still strong and more than suitable for everyday tasks and intensive features like gaming.

Meanwhile, the S6 is powered by Samsung’s custom 64-bit Exynos 7420 chip, which comprises a similar octa-core set-up to the Snapdragon 810, minus that unwanted heat. It’s also the first smartphone to feature 3GB of DDR4 RAM, which is up to 80 per cent faster than the G4’s DDR3. In practice, the S6 is extremely powerful, slick and responsive, making mincemeat of high-end 3D games. 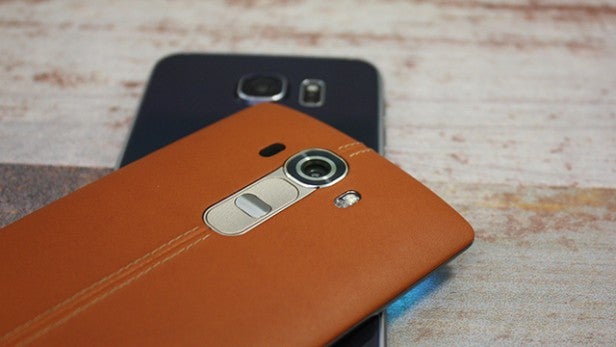 While both mobiles run on the latest version of the Android mobile operating system, Samsung and LG have taken different approaches to the software. LG’s overlaid its own UX 4.0 skin over 5.1 Lollipop, doing away with Optimus in the process. It comes with a range of organisation features, including a timeline and a memories feature in the gallery, as well as smart bulletin, which allows you to view notifications from multiple apps on a single screen.

The S6 instead features a much-improved version of its own TouchWiz user interface. The bloatware we’ve come to expect has been scaled back, and the result is a much better user experience. Core Android
Lollipop features now shine through and it’s generally a much cleaner UI
to navigate. 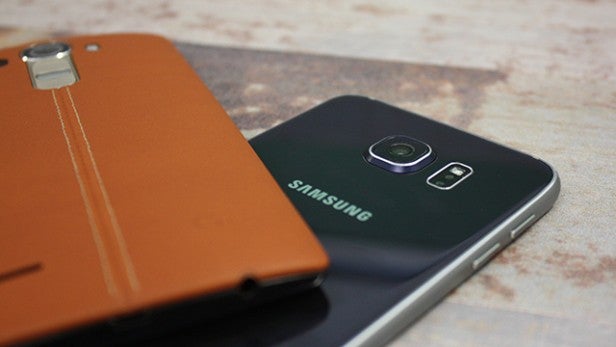 Smartphone photography is an extremely hot area right now, and neither LG nor Samsung have held back in this department. The LG G4 comes with a 16-megapixel OIS-enhanced rear camera with laser-assisted focus and a f/1.8 wide aperture
lens which can let in more light for improved low-light photography.

One of its headline features is manual mode, which lets you get your hands dirty, allowing you to control elements like white balance, ISO and shutter speed, and save images in raw format, as well as JPEG. For more casual shooters, auto and simple modes will suffice. 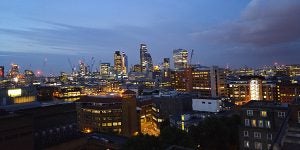 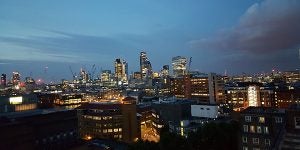 The G4 is the first smartphone to come with a colour spectrum sensor, which LG says identifies both objects and light, enabling the camera to automatically adjust white balance. It’s capable of recording video in 4K, too, and is backed up by an 8-megapixel front-facing camera.

We’re huge fans of the Samsung Galaxy S6’s 16-megapixel primary camera, which can capture sharper, more vibrant images better than most of its rivals.  As you can see in the images above, both deliver excellent images at night with the G4 shading it for the extra detail and more natural tones. The inclusion of split-second HDR and optical image stabilisation means excellent results in low-light conditions. Its f/1.9 lens isn’t quite as wide as the G4’s, but this is still a camera that’ll get you terrific results at any time of day. The 5-megapixel selfie camera doesn’t quite measure up with the G4’s on paper, but it’s still more than good enough for shareable selfies. 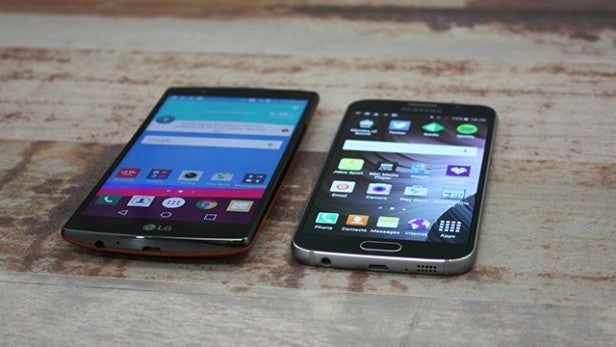 Like its older brother, the LG G4 is powered by a huge 3,000mAh battery. Despite the big battery, there’s also a big QHD screen to take into consideration. As a result, the G4 doesn’t outclass its rivals for staying power. You’ll get a day out of it, but will have to rely on power saving modes to eek out more than that. For charging, there’s Qualcomm’s Quick Charge tech on board so you can get it back to life quicker than it takes to charge an iPhone 6.

Stamina is actually the S6’s weakest area. Its 2,550mAh power pack is far smaller than the G4’s, and struggles to keep going for even a day if you push it hard. As mentioned above, it’s not removable either, although how many people trek around with a spare battery in their pocket? You do get wireless charging support and Samsung’s own fast charging technology, which does mean you can power up to 100% in half the time it takes most smartphones.

If you want two-day battery life like the Xperia Z3, then you won’t get that with either of these phones. It’s slim pickings but we’d say the S6 is preserves battery life better than the G4 and just edges it.

The LG G4 may well be the stiffest competition for the S6 yet. On paper both phones are very strong, but the microSD card slot on the G4 might make it the more appealing prospect for those who like lots of mobile storage.

Having lived with both, it’s fair to say that these are the two standout Android phones of the year. With the G4, you’re getting essentially the same design and overall performance but it also inherits a fantastic camera. The S6 is beautifully designed, nails the performance (apart from battery life) and has a great camera as well.

The S6 feels like the better overall package but if you get the G4, you won’t be disappointed either. Especially with that leather back cover…